Ten Days of Terror!: God Told Me To

Film: God Told Me To
Format: DVD from NetFlix on laptop. 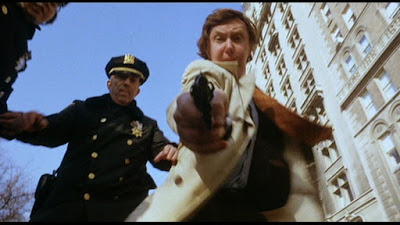 When it comes to his films, Larry Cohen was always better at coming up with really interesting ideas than he was communicating those ideas to an audience. Cohen’s films were clunky at best, frequently ham-handed, and generally amateurish. They’re plagued by poor editing, often grainy film, and acting that left a great deal to be desired. But for all of the problems with Cohen’s films, his ideas were often so astonishing that they demand to be seen. Such is the case with God Told Me To, a little-remembered film from the mid-‘70s. Cohen’s film is a weird take on religious belief and faith with a good dose of science fiction thrown in for good measure. That the whole thing doesn’t really hold together completely is less important than the ideas that attempt to hold it together.

We start with an almost literal bang. A young man (Sammy Williams), for no evident reason, has taken a rifle to the top of a water tower and started shooting people on the streets of New York. The death toll hits double digits when detective Peter Nicholas (Tony Lo Bianco) arrives on the scene. Nicholas climbs up the tower to talk to the gunman, who has evidently been picking people off at long distance with a mail-order rifle. When asked what has triggered the rampage, the gunman says, “God told me to,” and jumps to his death.

We’re told of other rampages and see parts of others. There is a sudden spree of otherwise normal people going on homicidal rampages across New York, all claiming that they were inspired to kill specifically by God. Nicholas is warned by an unknown man that a rampage will occur during the St. Patrick’s Day parade and will be caused by a police officer. Almost as if the caller knew something, during the parade, an officer (Andy Kaufman of all people) pulls out his pistol and starts shooting.

All of this is interesting and disturbing, but this is also where the film starts to go off the rails. Nicholas discovers that in each of the rampages, the person responsible for the killing was seen talking to a young man with long hair shortly before. A little more digging turns up the name Bernard Phillips (B-movie staple Richard Lynch), who is evidently a cult leader who has some mysterious ability to control the minds of others. There’s also a story about Phillips’s mother, who claims an alien abduction that ended with her impregnated. Nicholas tracks his own story and discovers his birth mother (Sylvia Sidney), who also claims to have been impregnated by aliens, and who gave birth to him despite being a virgin.

Yep, we’re diving head-first into the religion here because we’re adding “virgin birth” to the plot along with God telling people to go on slaughter rampages. Evidently, both Nicholas and Phillips are half alien babies, and Nicholas discovers his own ability to control the minds of other people. And, of course, there’s a confrontation and some really disturbing sexual imagery before the whole thing winds down.

I said it at the top of this review, but it bears repeating here: God Told Me To is based on a really good idea. Other than a few of the performances, though, this is not a good movie by any stretch of the imagination. It’s sloppily edited and the music is overbearing through the entire thing. It also jumps around in terms of the plot. The middle of the film can more or less be described as “things happen” and some of them have to do with the plot. It’s as if Larry Cohen had the base idea and the final scene in mind and just threw things together to connect the opening and closing scenes.

It’s a shame, too, because God Told Me To could have been brilliant. The idea of random people going on murderous rampages based on a religious vision is one that is really worth exploring. The presence of aliens and hybrid alien/humans takes this in a direction that cheapens the starting point. The more I think of it, the more it seems like the film was made specifically so Larry Cohen could show full-frontal female nudity include a few shots of an artificial vagina.

In short, God Told Me To would have been worlds better if Cohen had gotten someone to write the screenplay with him and then sat back in the producer’s chair and let someone else direct. There’s a kernel of an idea here that is worth doing something with, but someone with more skill beyond coming up with a good idea needed to be the person in the driver’s seat. I like it more than it probably deserves, but it could certainly be better than it actually is.

Why to watch God Told Me To: The idea is pretty spectacular.
Why not to watch: Larry Cohen’s skills as a writer and director weren’t up to the level of his ideas.

Posted by SJHoneywell at 9:08 AM