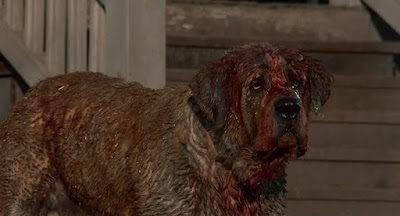 Cujo is not a film I looked forward to reviewing. This is not because it’s a bad film (it’s not) or not scary (it is) or that it doesn’t contain some good scary moments (it does). The problem is that Cujo is enough story for maybe a 30-minute film and it’s been stretched to just over 90 minutes. There’s a lot of story here that feels like it’s included specifically to pad the movie since it has nothing to do with the story being told. Or it does, but only obliquely. As a short film, it would be gripping and terrifying. Full length, it’s merely got some good moments and a lot of waiting around for the next good moment.

Cujo can be fully explained in a couple of sentences. A friendly St. Bernard is bitten by a rabid bat and becomes rabid. Through a series of events involving chance and the dog attacking and killing a couple of people, the dog traps a mother and her young son in their car for a couple of days. That’s it. Like I said, it’s not a bad premise for a short, but for a full-length movie, it requires a great deal of extra bits.

Unfortunately, at least some of that padding needs to be explained. Donna Trenton (Dee Wallace) is married to Vic (Daniel Hugh Kelly) but is having an affair with her old high school boyfriend, Steve Kemp (Christopher Stone, who Dee Wallace was actually married to at the time). Their son Tad (Daniel Pintauro) is young and constantly terrified by monsters. Meanwhile, Cujo, the dog owned by local abusive husband and shift car mechanic Joe Camber (Ed Lauter) is bitten by a rabid bat.

Eventually, Joe Camber’s wife and son go away on a trip and Vic Trenton’s major advertising account is suddenly in deep trouble, meaning he’s gone for a few days as well. Cujo succumbs to the disease, kills Camber’s neighbor Gary (Mills Watson) and then Camber. Donna calls off the affair with Steve and takes Tad with her to get her Pinto fixed. And, since this is before cell phones, she’s stuck with a dodgy car that won’t start, a couple of dead bodies, a rabid dog, and no way to get help and no one around to help. Terror ensues.

But really, that’s the whole movie. People likely remember this as a tense stand-off between Dee Wallace and the rabid dog, but a great deal of the movie is spent watching Vic Trenton worry about his failing marriage. There are a few excellent jump scares (the first one that involves Donna is one of the best of its decade), but there are also long patches of film that consist of Donna staring at the dog, who stares back at her. After a few times, this stops being tense and starts being merely tedious.

The stand out performance here is absolutely Dee Wallace, who was always good in horror movies and perhaps never better than here. Stone was sort of the non-teen scream queen of the ‘80s, and in Cujo, she’s completely believable. This is a woman who is terrified of the dog that’s trying to kill her, but as time goes on and life inside the car gets problematic (both of them are soon dehydrated), she’s also a woman who is willing to literally face down death to protect the life of her child. Horror movies don’t get a lot of play come award season, but she was wrongfully overlooked for what she does here.

She really is the best thing in Cujo, and aside from the rabid dog, the only memorable thing in the film. The side plots, like her affair with her old boyfriend, just end up as filler. In fact, when Vic does return home and finds Donna and Tad missing and the house trashed, we get a short red herring about the police tracking Steve down only to discover that his story checks out. The affair feels like it’s here specifically because it adds about 20 minutes to the running time even if it really adds almost nothing to the plot.

Is there a way to make this feature length in a way that actually works? Sure. More rabid animals. A plague of rabid animals would make for a much more serious threat and thus necessitate a longer film. Cujo is a great set up for a scary movie. There’s just not enough pay off for something that lasts 90 minutes.

Why to watch Cujo: Homegrown horror that actually seems believable.
Why not to watch: It’s a short stretched to feature length.

Posted by SJHoneywell at 7:03 PM