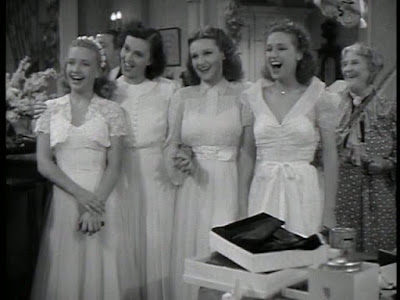 My DVR goes through periods of boom and bust. Suddenly, out of nowhere, half a dozen movies I want to see will appear in the same week on various channels and the damn thing starts to get clogged. And, like most people, I have things I’ve recorded months (or years) ago waiting around for me to get to them. It’s a constant battle between what I have available to me through various means, what I want to record, and removing things from the DVR’s memory. When I get the chance, I like to remove something. One of the oldest recordings I had was Four Daughters, which I recorded last year. That’s long enough.

That said, Four Daughters is the kind of film I wish I had already watched or had left in the queue. It commits what is in my opinion the cardinal sin of movies: it’s boring. A boring film, at least in my opinion, is far worse than a bad one. I’ve no doubt that the people involved were earnest in attempting to make a good film, and in some respects they succeeded; this was nominated for Best Picture, after all. But it’s been a long time since I’ve found something so dreary. It’s a shame, too, because there are good people involved in this and it comes from a talented and acclaimed director.

Adam Lemp (Claude Rains) has raised four adult daughters with the help of his sister Etta (May Robson). Since he is the Dean of a musical foundation, it follows that all of his daughters are musically inclined. From oldest to youngest, the daughters are the harp-plaing Emma (Gale Page), pianist Thea (Lola Lane), singer Kay (Rosemary Lane), and violinist Ann (Priscilla Lane). In terms of personality that is relevant to the film, Emma has gained the attention of neighbor Ernest (Dick Foran), but she’s holding out for better. Thea is being actively courted by the wealthy but dull Ben Crowley (Frank McHugh) and isn’t sure if she loves him or merely loves the idea of stability. Kay has received scholarship offers, but wants to stay home. Ann will be the focus of much of the film, and deserves her own paragraph.

Early in the film, a man named Felix Deitz (Jeffrey Lynn) arrives. Felix is a composer whose father knew Adam Lemp. All four of the girls are immediately attracted to Felix, and he specifically returns affections for Ann. Showing up soon after Felix is Mickey Borden (John Garfield), who is there to help Felix with an orchestral arrangement. Mickey also falls for Ann, who returns feelings for both him and Felix.

Mickey gets his own paragraph as well. Mickey is a musical version of a noir character. This is a guy who has been kicked from the moment of birth to the present, never catching a break. He despairs of anything good ever happening to him, and despairs equally of his career choice. Essentially, he complains that the fates have cursed him with enough talent to be good at something but not with enough to be noteworthy or even to make a living at it. So when Ann announces that she and Felix have become engaged, it’s just another in a series of kicks for poor Mickey. So it’s a mild surprise when, on her wedding day, Ann runs off with Mickey, leaving Felix at the altar.

That moment, and another that happens a little later at a family Christmas celebration at which Felix shows up, are the only really interesting moments in the entire film. Mostly, this is about both Ann and Emma mooning over Felix, Emma being torn apart emotionally when Ann consents to marry him, and then the aftermath of Felix being left at the altar. About half of the characters seem completely worthless in the film. Kay and Thea might as well be in another movie, and Aunt Etta is there to provide mild comic relief, with the emphasis on “mild.” I’ve also discovered something about Frank McHugh. His incessant nervous giggle bothered me in Going My Way and he does the same thing here. Evidently, that wasn’t a character trait but an acting trademark, and it seriously makes me dislike Frank McHugh.

A bigger crime here is that a talent like Claude Rains seems completely wasted. Rains was a great talent, and here his job is to look like he’s playing the flute now and then and to be fatherly to a brood of daughters. His role is handled well because it’s Claude Rains, but Adam Lemp could’ve been effectively played by anyone in pants.

John Garfield is the lone saving grace. He was nominated for Best Supporting Actor for this role, and as the only really interesting person in the film, he almost certainly deserved to be. The film was more interesting when he was on screen. That’s not saying much because it was flat and lifeless entirely without him and just about anything would be an improvement.

Needless to say, this is not a film I’ll be looking to watch again any time soon. If it was bad, I could make fun of it. If it was great, I could rave about it. Since it’s just dull, I’m out of things to say.

Why to watch Four Daughters: John Garfield was the shit.
Why not to watch: There’s nothing here you haven’t seen before and better.

Posted by SJHoneywell at 9:16 PM