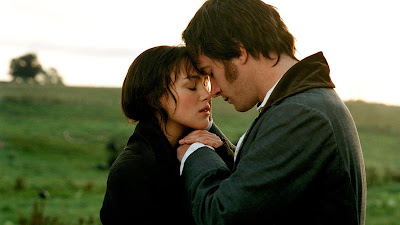 I genuinely like to give every movie I watch a chance. The best way to be surprised by something is not to go in with preconceived notions of the film in question even if that’s hard sometimes. In the case of Sense and Sensibility, I went in with suspicions and came out a believer. So when Pride & Prejudice, another Jane Austen romantic soap opera showed up in the mail, I was guardedly optimistic. It’s evident that I’m not the target demographic for a costume romance set in the decade or so before 1800, but I’ve been surprised plenty of times before. I had reservations, but I had hopes, too.

And you know what? The hopes paid off. Pride & Prejudice is a pretty good film. Oh, I didn’t rush out and find a copy of any of Jane Austen’s novels to start reading (although I did literally find a copy of the book in a restaurant a couple of hours after finishing the movie—true story), but I think I liked this as well as could be expected for someone who favors horror and science fiction over other genres. I still like Sense and Sensibility more. Part of that is the story itself and part of that is Ang Lee’s superior direction. But I was pleasantly surprised by this all the way through.

Like evidently everything Jane Austen wrote, Pride & Prejudice is going to be about a family of soon-to-be destitute young women looking desperately for love in a world where women needed a good marriage or a rich family to secure their future. In this case, the family in question is the Bennets. Mr. and Mrs. Bennet (Donald Sutherland and the always-wonderful Brenda Blethyn) live comfortably as landed gentry with their five daughters. These are Jane (Rosamund Pike), Elizabeth (Keira Knightley), Catherine (Carey Mulligan), Lydia (Jena Malone), and Mary (Talulah Riley). However, the house will be inherited by someone else, which makes Mrs. Bennet anxious to marry her girls off before her husband dies. Elizabeth is our main concern here, with Jane and Lydia figuring in to lesser extent.

Coming to the neighborhood is wealthy bachelor Charles Bingley (Simon Woods). He arrives with his stuck-up sister Caroline (Kelly Reilly) and his friend, the extremely wealthy Mr. Darcy (Matthew Macfadyen). Bingley and Jane immediately fall for each other while Elizabeth takes a quick dislike to Darcy. Things are complicated by a visit from Mr. Collins (Tom Hollander), a clergyman who will eventually inherit the Bennet home and lands. He’s a pompous and dull little bastard who is rejected from marrying Jane (who hopes for a proposal from Bingley) and rejected by Elizabeth, who can’t stand him. Eventually, Collins marries Elizabeth’s best friend Charlotte (Claudie Blakley).

Also tossed in the mix is George Wickham (Rupert Friend), a dashing young military man who has nothing good to say about Darcy. In fact, he blames Darcy for his current low state, which only further enrages Elizabeth. And, of course, Elizabeth and Darcy will be forced into each other’s company in multiple ways and at multiple times. When Darcy comes between Bingley and Jane, things worsen, and it becomes even more complicated when he declares his undying love for Elizabeth, who has vowed to hate him eternally.

Okay, but this is Jane Austen, so we know that everything is going to work out in the end. It’s really a question not of “if” but of “how.” And of course everything does work out satisfactorily, even with the presence of an icy Judi Dench as Lady Catherine de Bourgh, a woman who heartily disapproves of Elizabeth Bennet.

Here’s the thing—even though the ultimate ending is never really in doubt here, getting to that ending is worth the trip. Pride & Prejudice is a lush and beautiful film and the costuming is exquisite all the way through (and was nominated for an Oscar, but lost to Memoirs of a Geisha). There’s a great deal to like in the look of the film, and while the sisters look nothing alike, it all works well.

Keira Knightley was nominated for her role, and she’s good. Matthew Macfayden is her match on screen most of the time. He’s reserved through the entire film, but of course he’s supposed to be as someone who masks his own shyness and discomfort with a feigned superiority. For me, though, the three supporting roles played by Donald Sutherland, Brenda Blethyn, and Judi Dench make the whole film. Judi Dench has only a couple of scenes, but she is as vicious and cruel as she normally is entertainingly sweet and fun. Donald Sutherland is laconic and long-suffering, and he handles the role perfectly. It’s Brenda Blethyn’s overly nervous and constantly worried Mrs. Bennet who makes the film for me. Every time she showed up, I smiled.

The problem I tend to have with romances from this era is that they always come across as so timid. People seem to deal with each other as if the other person will shatter if touched. I admit that I find that frustrating. I get that it’s the time, but so many problems would be solved by everyone dropping all of the social pretense and having a real conversation. But it’s also the era, so while it might bother me, I try not to get too upset by it.

Maybe I should read some Jane Austen. If nothing else, I’ll go into future Austen adaptations with an even more open mind. Who would’ve thought that?

Why to watch Pride & Prejudice: It’s surprisingly enjoyable.
Why not to watch: While the romance is there, it’s about as sexy as a burlap nightie.