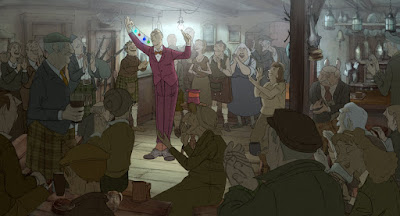 When I first heard about The Illusionist (called L’Illusionniste in France), I was interested in seeing it. In fact, I was interested enough that when the local remaining Blockbuster went out of business, I bought the Blu-ray. Tonight I finally got the chance to watch. My interest in the film stemmed not from any relationship it has with the 2006 film of the same name (there’s no relationship at all), but this film’s pedigree. The Illusionist is based on a screenplay written by the great Jacques Tati. I like Tati and wish that he’d done more films, so The Illusionist, originally intended as a live-action film, is special.

It’s also immediately evident that this is based on the Tati, or at least done in the style of Tati. We are introduced to Tatischeff (marginally voiced by Jean-Claude Donda), a stage magician working in France in 1959. Tatischeff has a good act and a cantankerous rabbit, but the world is passing him by. As his audience fades, he makes the decision to take the act to England, where he plays following a raucous rock band. Dissatisfied, he heads north to Scotland.

Things change here. He is temporarily popular on a remote Scottish island until the pub where he performs is wired for electricity. It is also here that he meets Alice (Eilidh Rankin), a young girl working in the hotel. Alice believes that Tatischeff is truly capable of magic, and when the magician leaves for Edinburgh, she follows.

Tatischeff gets work in a modest theater playing for sparse crowds. Whatever money he earns he spends on gifts for Alice, who is continually impressed by his ability to make things appear out of nowhere. He attempts to explain to the girl that his tricks really are just tricks, but she’s unwilling to believe that he can’t actually perform feats of supernatural prowess.

And eventually, the old man is forced to take menial jobs, and even sells off his magic kit to pay for things for Alice. And Alice grows up, and grows out of her fascination with the old man who has biven her everything he has. It’s quite sad and quite beautiful at the same time.

There’s a lot that The Illusionist does right. For anyone familiar with the work of Jacques Tati, it’s evident in the first minute that a great deal of this film is an homage to the great French clown. Tatischeff’s name is an obvious reference (it was Tati’s actual name), but so too is the character himself. Tatischeff has Tati’s stooped posture, long legs, and pants that don’t quite cover his socks. His mannerisms are the same was well—the bumping into people and bowing apologetically, the use of physical props—this all harkens back to Tati’s best work.

An additional connection is the style of dialogue. Tati’s best work was done in near-pantomime, with dialogue muffled and generally implied rather than fully spoken. That is carried over here, and it connects back to director Sylvain Chomet’s earlier The Triplets of Belleville. The recurrent musical theme is a call back to films like Les Vacances de M. Hulot. That Tatischeff wanders into a movie theater showing Mon Oncle is just another little inside joke and an additional visual treat.

I like the art, too. In addition to paying homage to the original screenplay, there’s a charm here that is only possible with hand-drawn animation. This is obviously a labor of love for Chomet and his team, and that love shows through in every frame. Even if the story weren’t worth seeing, the artwork is such that it’s a visual feast and truly beautiful.

The biggest complaint I have here is that The Illusionist is too short. As it is, there isn’t nearly enough Tati in the world and I could have stood for another 20 minutes or so as well as additional comedic antics. The second complaint, and this one goes more to the heart of the film itself, is that The Illusionist is far more melancholy than a lot of Tati’s work. There’s always a hint of sadness in what Tati did, but here that sadness is touched with very little joy. As the film continues, the other aged performers who live in the same building as Tatischeff and Alice slowly move away. When Tatischeff pawns his magical gear, he sees his ventriloquist neighbor’s dummy in the shop window.

Yet there is joy here, but it’s bittersweet. We smile at some of the events on screen because they are sweet and heartfelt but also because these moments are sad, and it's sad in a way that could only be handled with this sort of emotion in an animated film.

And I wish there was more Jacques Tati for me to enjoy. The Illusionist just isn’t enough despite its beauty and its pleasant sadness. I liked this as much as I expected to like it, and I shouldn’t ask for more, but I want more, dammit, even though the dearth of Jacques Tati’s work only makes this that much more melancholic.

Why to watch The Illusionist: There’s not enough Jacques Tati in the world.
Why not to watch: It’s sadder than a lot of Tati’s work.