Film: Changeling
Format: Streaming video from NetFlix on The Nook. 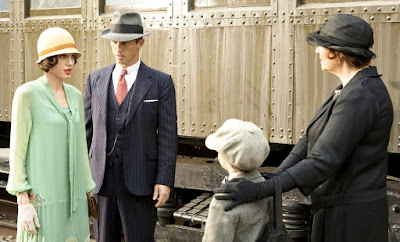 There’s a moment in Changeling that, through no fault of the movie, pulled me out of it completely. It happens in the first half hour and it was completely unexpected. It is one of the first moments on screen of Police Captain J.J. Jones (Jeffrey Donovan). He tells Christine Collins (Angelina Jolie) that her son has been found outside of DeKalb, Illinois. Why does this mean anything? Well, I live in DeKalb, Illinois, and my older daughter in particular is a huge fan of Jeffrey Donovan thanks to Burn Notice. So for just a moment, it was Michael Westen talking about my home town.

Changeling takes place in the early 1930s during the Depression. Christine Collins lives with her young son Walter (Gattlin Griffith). One day, picking up an extra shift at work, she comes home to find Walter gone. Eventually, the police return her son to her, but it is obviously not her boy. This replacement Walter, who insists that is who he is, has been circumcised and is three or four inches shorter. He also looks nothing like Walter. Christine is naturally insistent that the police have returned the wrong boy, but Captain Jones and doctors on the police payroll insist that he is.

Those who know Christine and who know Walter are convinced that the boy is not who he says he is. His dentist, for instance, has evidence that the boy in question cannot be Christine’s son. Walter’s teacher says the same thing. But when Christine goes to complain to the police, she is taken into custody and sent to a mental institution. Here, she meets fellow inmate Carol Dexter (Amy Ryan). Carol tells her that the ward is filled with women who are there simply because they challenged police authority and that the only way out is to comply with the police. In Christine’s case, that means accepting that the boy she has been given is actually her son.

Two stories are happening on the outside while Christine is in custody. The first is the furthering of justice for Christine and Walter Collins at the hands of Reverend Briegleb (John Malkovich), a crusading minister who rails against Los Angeles police corruption on his weekly radio show. He is also convinced of the truth of Christine’s story and acts to not only find justice for her but to get her removed from psychiatric custody.

Second, and much more important, is the capture of Sanford Clark (Eddie Alderson), who is to be deported back to Canada. Once in the custody of officer Lester Ybarra (Michael Kelly), Clark confesses that he was on the farm of his uncle Gordon Northcott (Jason Butler Harner), who forced him to help kill as many as 20 young boys, one of whom was Walter Collins. Northcott is captured and the trial begins simultaneously with the hearings on the corruption and misconduct of the police.

All of this up to here is beautifully made and well done. And it’s here, in the third act, that Changeling falls apart a bit for me. We get the results of the trials, neither of which are surprising. We jump forward a couple of years to see Gordon Northcott’s execution. And this, at least in my opinion, is where the film should end. But it doesn’t end here. There’s a good 20 minutes or so to go, following up leads, finding a missing child, and showing Christine Collins as a mother who refuses to give up on her son, despite the fact that he’s probably dead.

Changeling is a well-made movie, something that is hardly a surprise with Clint Eastwood sitting in the director’s chair. I’m used to expecting one of Eastwood’s movies to be not only a film that I appreciate on a technical level, but one that I at least respect and probably enjoy. But Changeling runs out of steam and drags itself to multiple finishes. It ends, then it ends again, and then it finally ends for a third time and the credits roll. I half expected to see something after the credits.

The relevant nomination for this blog is Angelina Jolie, and it’s one of her better performances. There is real emotional power behind her performance here, and there’s not a moment I don’t believe her in the role. Equally good is John Malkovich in a much smaller role, and I like Michael Kelly as the token good cop on the L.A. police force. There’s also a forceful performance from Geoff Pierson as the lawyer who takes on Christine Collins’s case. In retrospect, I’m also a little surprised that Jason Butler Harner didn’t merit a Supporting Actor nod, since he is riveting on screen, and is the only person capable of drawing attention away from Jolie when the share a scene. Since my daughter doesn’t read this blog, I can get away with saying I’m a little disappointed in Jeffrey Donovan’s inconsistent accent. I couldn’t tell at times if he wanted to sound like he was from Georgia or Dublin, and neither one quite worked.

Changeling is a gripping film for the bulk of its running time, but it gasps and wheezes to the finish. By the time we get to the end of Gordon Northcott, we’re invested enough to stay to the credits, but you can expect to check your watch a couple of times as this winds to a close.

Why to watch Changeling: A gripping drama of police malfeasance and murder.
Why not to watch: It’s about 20 minutes too long.

Posted by SJHoneywell at 4:34 PM