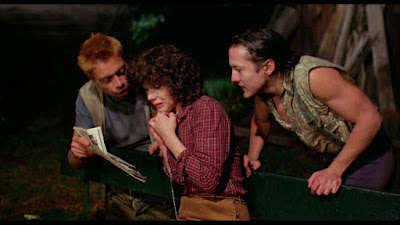 Back at the dawn of home video, it seemed like about half of the movies available for rent were cheap slashers, horror movies, and exploitation films. I remember seeing the box for Mother’s Day at the Video Bug when I was a kid. Imagine my surprise when I saw the same image staring up at me from a library shelf. The box has changed, though; there’s a blurb now proclaiming this treasure as Eli Roth’s favorite horror film. That doesn’t do much for me since I’m not a fan of Eli Roth. I figured this would be a rough ride. It doesn’t help that three of the principle stars used pseudonyms. In fact, that’s pretty much an indication that they wanted to distance themselves from schlock.

This becomes less surprising when you realize that director Charles Kaufman is the brother of Lloyd Kaufman, the creator of Troma. Mother’s Day isn’t a true Troma film—this isn’t truly intentional camp, but it is low-budget, poorly acted, and exploitative. This isn’t a good movie and it’s not intended to be one. This is shock cinema, and there’s no surprise that it’s coming from the sewage-y end of the cinematic lake.

In its most basic terms, Mother’s Day is a rape/revenge film along the lines of I Spit on Your Grave. This means we’ll spend the first part of the movie watching women get terrorized and brutalized and the second part watching those women turn the tables on their attackers. That’s it. We’re done here.

Oh, you want specifics? Okay. We begin in one of those cheesy hotel seminars that teaches people how to feel good about themselves. A hippy couple get a ride from a little old woman wearing a neck brace (Beatrice Pons under the pseudonym Rose Ross). It’s soon evident that the hippies are planning on killing the little old lady when her car conveniently stalls on a country road. Fortunately for her, this is also where she meets her sons Ike (Frederick Coffin under the name Holden McGuire) and Addley (Michael McCleery under the name Billy Ray McQuade; it’s almost a shame they didn’t call themselves Brock Landers and Chest Rockwell). The male hippy is soon decapitated and the female roughed up and strangled by Mother. Yep, it’s a hillbilly murder family.

Cut to 10 years previous where we are introduced to our female protagonists Abbey (Nancy Hendrickson), Jackie (Deborah Luce), and Trina (Tiana Pierce) as they are set to graduate from college. They specialize in “pranks” that are grade school novelty items and call themselves the “Rat Pack.” Flash forward to the present day where we learn that the trio now meets once a year for a reunion. They smoke pot, drink beer, and basically talk about shit they did in college. This year, it’s Jackie’s turn to plan the retreat and she’s decided that they’re going camping. Guess where! A couple of stupid pranks and some reminiscence to get us to know and like the girls and we’re a third of the way through.

And then comes the middle of the film where the three women are kidnapped by Ike and Addley and carted back to the house. Jackie, whose backstory is all about how men have abused her, is the first one dragged off, raped, and killed. Abbey and Trina for some reason wait until the next morning to try to escape, and this wouldn’t be a revenge film if they weren’t successful. Of course, since this is the type of film it is, the escape attempt pretty much slices Abbey’s hands off. One discovery of a severely injured Jackie later, our two remaining heroines are off into the woods with revenge on their minds, or at least in the mind of Abbey.

In the third act, Jackie dies of her injuries, Trina discovers that there’s no help available and the two women fight back, intent on killing off the hillbilly yokels and their demented mother. There are no real surprises here, and even the axe shot to one of the hillbilly’s groin isn’t much of a surprise.

Mother’s Day is an exploitation film that tries to groove on the vibe of films like Deliverance and The Hills Have Eyes. It doesn’t have the imagination of those films, though, instead relying on tropes of the genre that were expected even when this film was made. I’d love to say that the clichés here weren’t clichés when this was made, but that would be a lie. I can’t imagine I’d have been surprised by much had I seen this in 1980 (although I would have been much too young).

There are also inexplicable attempts at comedy here. There’s a long sequence of Ike and Addley “exercising,” which consists of them hacking apart dolls with a knife and doing one-armed push-ups. Additionally, there’s a scene of the two eating breakfast that I think is supposed to be funny, but is actually just gross. For a short film (a smidge over 90 minutes), there’s an awful lot of filler here.

The term “exploitation film” frequently has a negative connotation, but there are good exploitation films. Mother’s Day isn’t one of those films. It’s shoddily made, contains massive plot holes, and is simply stupid. I wanted to take a shower the minute I was finished with it and I still don’t think I’d feel clean. There’s no joy in watching Abbey and Trina kill the mutant family. I’m happy it’s done.

Why to watch Mother’s Day: Slasher horror from near the dawn of the genre.
Why not to watch: It’s not funny or scary; it’s just unpleasant.