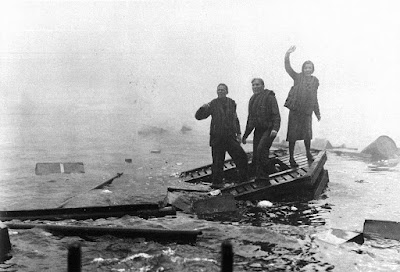 With films like Rope and Rear Window, Alfred Hitchcock demonstrated his absolute mastery over creating massive amounts of tension in a very small space. While both of these are master classes in how to use a claustrophobic set as a benefit, both of them came after Lifeboat, Hitchcock’s first (at least to my knowledge) film that really reduced his characters’ ability to get away from each other. As the name implies, the film takes place in its entirety on a lifeboat with survivors from a recent torpedoing in the Atlantic. As the film plays out, tensions develop between the survivors for a variety of reasons until the film almost repeats the opening at the end to bring the action to a close.

Central to the lifeboat is Constance Porter (Tallulah Bankhead), a correspondent and author who has managed to bring most of her possessions from the ship onto the lifeboat. As the film begins, Connie is alone, but is soon joined by John Kovac (John Hodiak), a crewman. Kovac is followed by industrialist Charles “Ritt” Rittenhouse (Henry Hull), then injured crewman Gus Smith (William Bendix), nurse Alice MacKenzie (Mary Anderson), and radioman Stanley Garrett (Hume Cronyn). The next three to board are crewman Joe Spencer (Canada Lee) with Mrs. Higgins (Heather Angel) and her infant child, who has drowned. The last to arrive is Willy (Walter Slezak), who comes from the submarine that sank the ship, but was in turn sunk by return fire.

The bulk of the tension in the film centers about Willy. About half of the people on the lifeboat want to toss him immediately over the side, since the sub not only sank the ship, but also shelled the lifeboats before it went down. Connie, who speaks German, is Willy’s main advocate, and so the man eventually becomes a part of the lifeboat’s little community. The initial plan is to set up a sail and head for Bermuda, but the lifeboat’s compass is smashed along with most of the food and water on board. Meanwhile, Willy is planning his own strategy to lead the lifeboat to a German supply ship.

As the film progresses, other problems come up. Mrs. Higgins discovers that her baby has died and disappears into the night. Gus’s injured leg becomes gangrenous, forcing the crew into an amputation with only the tools they have on hand. A storm knocks the food and water overboard. Meanwhile, as the people grow weaker, Willy becomes more and more powerful, exerting more influence over the ship’s course and the decisions regarding everything that happens.

One of the continuing themes of the story is one of loss. This is demonstrated through the continual loss of Connie’s carefully rescued possessions. Over the course of the film, she loses her camera, her mink coat, her typewriter, her bracelet, and almost everything else through one means or another. In a sense, the film strips her down to the barest of her essentials, a rude and terrible thing for a person who has become attached to her status and creature comforts.

There are a few other things at work here. Since Lifeboat came out in 1944, there is definitely some propaganda going on here. Willy is always shown as being helpful on the surface, but is also always shown as giving just enough information to get what he wants. Through much of the film, it is Willy in command of the boat. While the passengers suffer, Willy is shown endlessly, tirelessly rowing and singing, an incarnation of the Aryan superman ideal. Of course, this turns out to be a façade, and by the end of the film, we learn exactly why Willy seems so tireless. This is unsurprising given the time in which the film was made. There was no other way to depict a German sailor than to have him be devious, selfish, and conniving. That the story seems to work against this idea for most of the running time is actually very interesting, and makes the reveal all that much stronger.

There’s a lot to like here, and most of it is that Hitchcock is able to keep the entire film working without having his cast do more than sit and talk. There’s precious little room for them to move, and so there isn’t a lot of movement here. We get blossoming romances, accusations of cheating in poker games, petty rivalry, murder, and more, and almost no one moves from his or her spot.

Are there downsides? Sure. First, Hume Cronyn is inexplicably forced to speak with a terrible British accent. There’s no need for that; he’d have been the same character sounding like the Canadian he was. There’s a little mild racism in making Joe, the only black character, also the one who’s a former pickpocket. The main issue, though, is that the effects really don’t work for a modern audience. It’s obvious that the film is taking place on a set and in front of a rear projection. It looks fake almost every time we see the ocean.

My advice: ignore that. Keep your eyes on the characters, since that’s where the drama is. There’s a lot here to like, and while Hitchcock got better with a small set in his future movies, Lifeboat shows he started strong.

Why to watch Lifeboat: Hitchcock demonstrates his mastery of tension on a small set.
Why not to watch: The effects really haven’t held up.

Posted by SJHoneywell at 3:40 PM