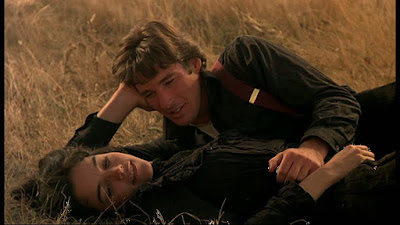 It turns out that 1978 was a great year for horror. Among the directors who had no chance of a nomination but are worth consideration in retrospect are George Romero for Dawn of the Dead, Philip Kaufman for the remake of Invasion of the Body Snatchers, and most especially John Carpenter for Halloween. In the world of films where the directors do get nominated, Terrence Malick’s work on Days of Heaven seems like an oversight. Charles Burnett probably didn’t have much of a chance of a nomination for Killer of Sheep, but he probably should have been in consideration.

5. Of the five nominees here, Warren Beatty and Buck Henry deserve it the least. I’m content to drop them off at the top for Heaven Can Wait. There’s nothing particularly wrong or bad about this movie, but it’s silly and it doesn’t hold a candle to Here Comes Mr. Jordan. Give the Academy the list of movies and eligible directors today and I don’t think this one gets nominated, and that’s the way it should be. There’s nothing wrong with it; it just doesn’t belong in the select group of films nominated for this award.

4. Hal Ashby had a lot with which to contend when handed the script for Coming Home, and he handled most of it admirably. This is a film that could have very easily become a melodrama, and Ashby kept it as far away from that as he could manage. But this is still a film I want to like more than I actually like. There are still problems with the way the whole thing comes together. Sure, Ashby had to deal with the script he had, but some of those problems required better handling. This would be a much lesser movie in many other hands, but it doesn’t get all the way there.

3: The Deer Hunter made Michael Cimino, which gave him the ability to make Heaven’s Gate, which destroyed his career. The inklings of Heaven’s Gate are contained in The Deer Hunter. I think it may well be a great film, but it’s bloated and top-heavy. The standard complaint about it is the same complaint that I have—the wedding scene goes on for too damn long. Some of that first hour is necessary, but the last two-thirds are far stronger than the eternal first hour. Ultimately, Cimino is responsible for that.

2: I don’t think I can honestly say that I enjoy watching Midnight Express, but I think it’s one of the great movies of its decade. The thing that puts Alan Parker in this position is that in a time when he could have simply moved his camera away from the horrors of many of the scenes, he shows us one of the purest and most awful visions of hell imaginable. For me, direction is all about the story telling, and Park is relentless in giving us Midnight Express. In many years, this would likely be my top pick, but for 1978, it comes up a hair short.

1: Woody Allen injected moments of pathos into Annie Hall, but Interiors was his first true non-comedy film. Interiors is a film about emotional reality, and it’s a gutting reality that we are given. These are not world-shaking events, except that they are in the lives of the characters. Every decision here, from the lack of jazz soundtrack to the non-glamorous appearance of the actors is the right one. It’s not my favorite Woody Allen film, but in many ways, it is the one that showed the world what Allen could be when he took off his clown nose. He had won the previous year, and this should have given him two in a row.