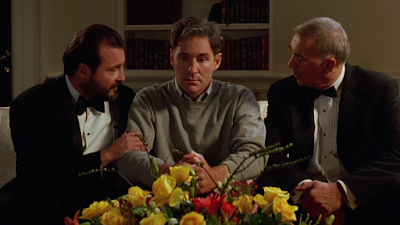 I’m not sure if I should label the movie Dave as a guilty pleasure or just a pleasure. I mean, it was nominated for Best Original Screenplay but as experience has shown, that doesn’t necessarily mean it’s a guarantee of quality. I like it, though. Aside from a couple of more serious moments, I think Dave is (and I use this word rarely) sweet. It’s also funny and is a nice reminder of when Kevin Kline could be really fun to watch.

Dave Kovic (Kevin Kline) runs a temp agency and makes extra money impersonating sitting president Bill Mitchell (also Kevin Kline), who he happens to look exactly like. This turns out to be a lucky break for Dave when he is tapped to be the president’s stand-in at an event. Although told not to speak, Dave can’t help himself. Then, when the limousine taking him home turns around after a phone call to his secret service point man Duane (Ving Rhames), Dave gets a bit nervous.

As it happens, President Mitchell has had a severe stroke during a dalliance with one of his secretaries (Laura Linney). Even if he survives, he’ll end up a vegetable. A snap decision is made by White House Chief of Staff Bob Alexander (Frank Langella) and Communications Director Alan Reed (Kevin Dunn). They ask Dave to stay on and continue impersonating Bill Mitchell.

It runs a little deeper than that, though. As it happens, Bill Mitchell’s administration is thoroughly corrupt, with much of that corruption coming from Bob Alexander. Unfortunately for Alexander, Vice President Nance (Ben Kingsley) has no scandals to exploit and seems uncorruptable, which makes him a poor fit for what Alexander wants. His goal is to find a way to tie Nance to a scandal, force him to resign, get Dave to appoint him as vice president and then have the president have “another stroke” so he can take over.

That would be a solid plot for a thriller, but Dave is an Ivan Reitman comedy, so naturally none of Bob Alexander’s plans go as scripted. Dave not only warms to the task of being the leader of the free world, he’s good at it. Even more, as someone tossed into a position of power, Dave is having fun playing at president, which causes a surge in his popularity among the American people. In fact, the only person who doesn’t seem to like the new Bill Mitchell is his wife, Ellen Mitchell (Sigourney Weaver).

Dave sags in the second half when it becomes too serious and preachy in places. Confronted by her actual husband’s coma, Ellen Mitchell decides to flee Washington and Dave decides to leave with her. As they sit quietly overlooking the capital, they talk about what they would do if given the chance to be back in the seat of power. So, of course, they go back. I can’t say that Dave loses the plot here, but it loses its sense of fun for much of the final half hour. There are moments that become more satisfying emotionally (revenge sells even in a comedy), but the joy of an ordinary guy thrust into the White House is lost when Dave becomes far too confident in the position.

Kevin Kline gives a good everyman performance here. Dave Kovic is likeable and funny, which is all he needs to be for us to root for him. There’s no shock in my liking Sigourney Weaver, since I tend to like her in whatever I see her in. The stand out performance for me, though is Frank Langella’s. During the course of his career, Langella has played Dracula, Nixon, and a man who kills for the opportunity to sell his soul to Satan, and yet I don’t think he’s ever played a man so coldly and calculatingly evil as Bob Alexander. It’s almost as if Dick Cheney watched this film and thought Alexander was the hero and worth emulating. He is perfect in this role: physically imposing, emotionally manipulative, and powerful.

It’s a staple of Washington comedies that we’ll get plenty of cameos from people playing themselves, and so we do. There are a number of senators who pop up for a line or two, plus the McLaughlin Group and Arnold Schwarzenegger. These are expected, of course, but still fun to see. The best small role here falls to Charles Grodin, Dave’s accountant friend who comes to the White House to help Dave with a budget problem. Ving Rhames, who plays the film as a hard-as-nails Secret Service operative who slowly mellows is fun as well, and gets one of the true moments of emotional honesty in the film.

Dave is never going to set the world on fire, but it’s also not supposed to. It’s an entertaining little piece of real-life fantasy. It’s cute if a bit over-earnest toward the end, but sometimes fun and cute is enough.

Why to watch Dave: Because Kevin Kline used to be a lot of fun.
Why not to watch: The first half is better than the second half.