This is the eighth in a series of twelve movies selected by Chip Lary at Tips from Chip. 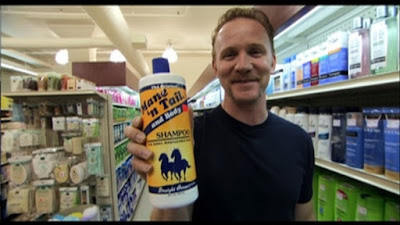 I like Morgan Spurlock. He’s sort of that smart ass friend who makes fun of everything including you and himself, but he’s funny enough to make it work. I like him because he takes on difficult topics and does so with a sense of fun. I especially like him because he’s a more palatable and personal version of Michael Moore without all of the baggage. So of all of the movies Chip picked for me, one of the ones that was already on my list of movies I wanted to watch was POM Wonderful Presents: The Greatest Movie Ever Sold (which, thanks to the length of that title will be called PWP: TGMES from this point forward).

With PWP: TGMES, Spurlock is taking on the advertising industry. I feel like I have a minor connection to this. One of my brothers is in advertising and has been for years. He runs his own agency. And I don’t think it’s bragging on my part to suggest that he runs a pretty above-board advertising firm. He’s rejected clients because he doesn’t like their business practices or their products. So, despite what this film might suggest, it is evidently possible to work in the advertising industry and maintain a soul.

Anyway, Spurlock’s goal is not simply to target advertising, but to target the more pernicious specter of product placements and cross-promotion. In perfectly meta fashion, the idea behind PWP: TGMES is to create a movie about product placement, cross-promotion, sponsorships, and corporate tie-ins by creating a movie completely funded by those product placements. This is about as meta as things get. Spurlock essentially films himself pitching the movie to people in the movie, making the movie while he’s filming the people he is trying to convince to fund the movie he’s already filming. There’s a certain level of brilliance there.

Throughout, he talks openly about the contractual obligations he has to his corporate partners. POM Wonderful pomegranate juice put up $1 million to have their name above the title (which they didn’t have to pay because of other contractual issues), but other sponsors include Merrill shoes, JetBlue, Hyatt Hotels, Mini Cooper, Ban deodorant, and, much to Spurlock’s constant amusement, Mane ‘N Tail shampoo, which was the official shampoo of the movie.

Among his contractual obligations were requirements to show products in the best light possible, that (for instance) other beverages could not be shown in the film if not a POM Wonderful product, and that he could only stay in Hyatt hotels regardless of where he travelled. He was forced to conduct interviews in a Sheetz gas station, since they were another sponsor. Part of POM Wonderful’s contract gave them approval of the final cut of the movie. He even included several commercials for some of his corporate partners within the narrative of the film as a part of the contractual agreement.

Part of what works here is that Morgan Spurlock is a Cassandra. He’s telling us about all of the problems that all of this advertising causes, but very few of us are willing to listen. He discusses the inclusion of advertising in school materials, and even inside the schools themselves. Schools, as it happens, have become fertile soil for advertisers who are desperate to get their products in front of a demographic with spending money. Why? Because those schools are often cash-strapped and desperate for funds any way they can get them.

He also spends time talking to consumer advocates, pitchmen, and directors for their input on how the movie industry is affected by sponsorships and corporate tie-ins. It’s actually given me new respect for Quentin Tarantino, who almost never has corporate partners. But again, there’s a wink and nod here—while Tarantino talks about how much an obvious promotional tie-in or product placement pulls people out of the film experience, we notice a Ban deodorant sitting on the table between him and Spurlock.

There’s a genius underneath all of this. It’s a shame this made back less than half of its paltry $1.5 million budget. Then again, Spurlock wouldn’t be a Cassandra if the message got through effectively, would he?

Why to watch POM Wonderful Presents: The Greatest Movie Ever Sold : Shouldn’t you know when you’re being sold something?
Why not to watch: Knowing you’re a dupe doesn’t really make you less of a dupe.

Posted by SJHoneywell at 2:33 PM