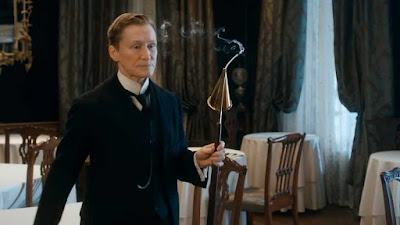 As always, I’m a slave to my Oscar lists, and I’m also a slave in one respect or another to what is available on NetFlix. Albert Nobbs is scheduled to vanish from streaming in a couple of days, so I figured watching it would more or less keep another movie off the huge list of discs I need. It seems that a lot of what I watch on streaming I end up watching because it’s about to disappear. What can I say? When possible, I try to avoid low-hanging fruit.

I didn’t realize that Albert Nobbs was based on both a novella and a play, and that speaks well to the way in which the film was directed. It’s not obviously based on a play. What I knew going in was that Glenn Close plays a woman who masquerades as a man. Additionally, the film has one of the most misleading NetFlix blurbs I have ever encountered. Read the blurb if you wish, but realize that it’s only tangentially related to the real story here.

Title character Albert Nobbs (Glenn Close) works as a waiter in a hotel in Ireland. Unknown to everyone in the hotel is the fact that Albert is in fact a woman who has been masquerading as a man for more than 30 years. We learn through the middle of the film that a series of events forced Albert into this life as a way of survival. By this point, he has lived as a man for so long that he no longer remembers his real name. Albert has become his entire identity. Each night after work, Albert counts up the money he has made from tips and salary. His goal is to eventually quit working as a waiter and buy a small tobacconist shop.

Things change with the arrival of Hubert Page (Janet McTeer), who has come to do some painting around the hotel. With the rooms full, Mrs. Baker (Pauline Collins), who owns the hotel, forces Albert to share his room with the painter for a night. Naturally, Hubert discovers Albert’s secret. Rather than revealing Albert’s masquerade to everyone, Hubert reveals his own secret: he’s also a woman masquerading as a man. What fascinates Albert is that Hubert is married to a woman named Cathleen (Bronagh Gallagher). Albert is flatly unable to get his head around how the marriage itself works and how Hubert broached the subject of gender with his wife.

The other important event at the hotel is the recent employment of Joe Mackins (Aaron Johnson), who is fired from his job in a hotel for dropping the luggage of a guest. Joe is hired to fix the boiler of Mrs. Baker’s hotel, and despite knowing nothing about boilers, manages to fix it. He becomes enamored of Helen Dawes (Mia Wasikowska), a hotel maid. In fact, what transpires is something like a love triangle. Albert, wanting the sort of life that Hubert has, starts to court Helen as well. Helen is uncomfortable with this, but is forced to see Albert by Joe, who hopes for expensive gifts and money so the pair can emigrate to America. When Helen gets pregnant (by Joe, obviously), things become much more complicated.

I’m not exactly sure what I was expecting with Albert Nobbs, but whatever I was expecting, I didn’t get it. Something just seems to be off in this movie. Perhaps it simply comes across as dull when this story shouldn’t be particularly dull. For whatever reason, I had a hard time staying interested in the story. In my own defense, it has nothing to do with the gender-bending aspects of the story. I’ve liked both Transamerica and Boys Don’t Cry in the last couple of months. But Albert Nobbs just felt…flat.

One thing I can say with confidence is that the flatness of the film does not come from either Glenn Close or Janet McTeer. Both of them are highpoints in the film. Actually, McTeer might be one of my major problems in that she’s not in the film enough. I liked Hubert as a character much more than I did Albert, whose timidity is a little off-putting. This isn’t to take away from what Close does with the role. I get her nomination for an Oscar because this is one of her better performances.

I won’t deny the quality of the film or the overall look of it. The costuming is great, even Close’s look as a man is still pretty feminine. But as much as I wanted to be engaged by the story, there was something here blocking me. And in truth, while this seems like a sad thing to say, I’m not sure I care enough about the film to really figure out what it was that left me feeling so off about it.

Why to watch Albert Nobbs: Glenn Close and Janet McTeer.
Why not to watch: It just feels unsatisfying.