This is the eighth in a series of twelve films suggested by the guys at YourFace. This is Nolahn’s third pick. 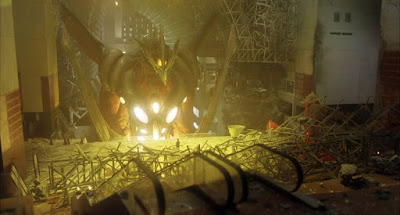 So I’ve been gone for more than a week on a family vacation. The reviews from last week were pre-written to keep the blog running while I was gone and had less access to the internet. It feels like ages since I’ve sat down and watched a movie, let alone reviewed one. But it’s that time of the month when I need to get through something not of my own choosing. I bought Gamera 3: Revenge of Iris months ago because the Blu-ray was only a couple of bucks and Nolahn had assigned it to me. Also because this wasn’t available to me any other way. I can’t determine if it’s kind of sad or kind of awesome that Gamera 3: Revenge of Iris is one of less than a dozen Blu-rays that I own.

Anyway, this is another film in the series of Gamera movies, featuring the giant atomic flying turtle of the title. Anyone who has watched one of the old Gamera movies knows that Gamera is a friend to children, but this incarnation, evidently the third of the most modern trilogy of Gamera films, is much more violent and destructive. The giant turtle might well be trying to protect Japan, but his protection causes thousands of casualties every time he shows up.

This is important, because much of the film comes from the revenge implied in the title. Ayana Hirasaka (Ai Maeda) sees her parents killed when Gamera inadvertently destroys the building they are in while he is fighting another giant atomic monster. Ayako discovers the egg of a Pokeman-ish tentacle creature she calls Iris which she wishes to raise to enact her revenge on the giant turtle. Jump forward four years or so and Gamera has returned to defend Japan from giant bird-like creatures called Gyaos. Again, while he destroys the Gyaos, Gamera causes untold destruction and tens of thousands of casualties in the process. Friend to children or not, Japan decides that it is time to act and sets the military off to get rid of Gamera.

Meanwhile, a study of a substance called “mana” appears to be the reason for the frequent monster attacks on Japan. When the mana drops, giant monsters appear and Gamera shows up to fight them. Of course, the present moment is the lowest recorded point of mana for Japan, which means that the Gyaos just keep appearing. And with Iris to contend with and the Japanese military forces out hunting him, Gamera has his scaly hands full.

So let’s get to the heart of this. Like all giant monster movies, Gamera 3: Revenge of Iris is inherently silly in some respects. It seems that giant monsters show up and ravage the countryside with disturbing regularity, and yet everyone tries to carry on with life as usual. People don’t seem to notice that massive creatures tens of stories tall are fighting just outside their window. One wonders why the hell people continue to live in Japan if every day is a crapshoot of whether or not the nearest village or city will end up trampled under the claws of either an attacking mutant hellbeast or the righteous claws of the defending turtle.

That’s really the biggest issue with this film. Everything else is surprisingly top of the line, especially for a movie about a humongous turtle that flies by firing some sort of jet propulsion out of its back leg holes. There are places where the CGI is pretty obvious, but in many cases, the effects are really excellent. In particular, the opening battle, complete with the flying bodies of collateral damage is pretty great. Sure, these are goofy giant monsters, but they rarely look like guys in rubber suits. There are even a few good horror/gore moments as Iris sucks the life force out of people and leaves them as desiccated, mummified husks.

It helps that this has a budget. A good budget is no guarantee of a good giant monster movie (witness the 1998 Godzilla), but in this case, it makes the whole thing work much better than the old films that featured guys in suits smashing cardboard sets. For as goofy as the plot is, this is a remarkably engaging movie.

It’s silly and nonsensical, but I enjoyed it. Good pick, Nolahn. You guys are 6.5 for 8 on the year.

Why to watch Gamera 3: Revenge of Iris: It’s sort of the Citizen Kane of giant monster movies.
Why not to watch: It’s still pretty silly.

Posted by SJHoneywell at 6:41 PM