Film: Hilary and Jackie
Format: Streaming video from Hoopla Digital on The Nook. 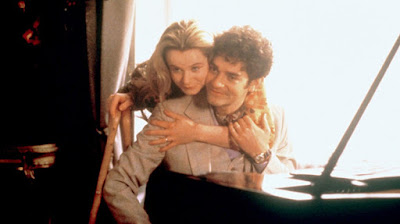 Going into a movie blind sometimes has its benefits and sometimes it ends up making me wonder what the hell I just watched. With Hilary and Jackie, I got about 40 minutes of the former and about 80 minutes of the later. This initially seems like a very interesting story of sibling rivalry and devolves into weird marital infidelity and illness. I have no idea how to come at this movie from any perspective. This is not a case where the movie doesn’t know what it wants to be. Instead, this is a case where the movie knows exactly what it wants to be and I have no idea what that is. This is despite the film being based on the real life of cellist Jacqueline du Pre.

Hilary (Keylee Jade Flanders as a child, Rachel Griffiths as an adult) and Jackie du Pre (Auriol Evans/Emily Watson) are sisters and musical prodigies. Hilary is initially the virtuoso on the flute, and when she feels she is being left behind with her cello, Jackie takes music much more seriously. It isn’t too long before Jackie has eclipsed her sister and is giving recitals and concerts around the world while Hilary struggles in school. Parents Derek (Charles Dance) and Iris (Celia Imrie) encourage both girls, but also seem to favor Jackie because of the full expression of her talents.

After the first half hour or so, the rest of the film is split into two halves. The first covers the experiences of Hilary living in the shadow of her sister, the second covering Jackie’s experiences of living through her sister and dealing with her eventual illness. Hilary, thanks to a disastrous test, gives up music formally and marries Kiffer Finzi (David Morrissey). The pair move to the country and raise children and chickens. But, the film seems to think that Hilary is only interesting when she interacts with her sister, and so our time with Hilary is basically limited to those moments when Jackie is around. The most critical period here is the one that comes out of left field. Jackie, obviously under some great strain and on the edge of mental collapse, comes to visit her sister and demands that Hilary allow her to sleep with Kiffer. This does happen eventually, and the culmination of that event speeds Jackie on her way back to her music and her husband, pianist Daniel Barenboim (James Frain).

The second half shows many of the smaller events from the first part through Jackie’s perspective. For instance, in the first half, Jackie sends a package home from Moscow. The eager family opens it to discover that it is just her dirty clothes. In the second half of the film, we learn that Jackie is unable to find a way to wash her clothing, and when a package of clean clothes arrives, it is, for her, like being home again. Jackie struggles throughout with her career and her desire to not be in the spotlight any more.

The conclusion of the film comes with the diagnosis of multiple sclerosis, Jackie’s loss of motor control, her inability to play the cello, and her eventual complete physical dissolution. It’s not a happy thing to watch, although the film does shoot for something like an uplift at the end.

The attempt here, as near as I can guess, is to provide not a character study of the two women or even an investigation of their relationship. It is more or less to chronicle these two lives that were extraordinary in a way and also kind of banal in a different way. I think the film is intended to by sympathetic to both women, but it’s very difficult for me to see this as a sympathetic portrait of Jackie du Pre. She comes across as spoiled, arrogant, and as someone much more interested in being perceived as special than at simply being good at something. When she marries Barenboim, her accent changes as if to make her that much more different from everyone else.

Emily Watson was Oscar nominated for this role, and while I understand it, it also seems like this was a role born to be Oscar nominated. After all, Jackie du Pre is at heart a woman with a tremendous talent that was stripped away from her. The last half hour or so of the film consists of her slow physical decline, and Oscar eats that kind of thing up. Griffiths was also nominated for a supporting role, and her performance is a lot more subtle, and is forced to stand up against Jackie’s constant need for attention. Then again, I like Rachel Griffiths, so I’m prone to like what she does on camera.

The main choice made in the screenplay and by director Anand Tucker is that there is no real position taken on the events of the film. What happens happens, and we’re left on our own to decide what everything means. In my case, it comes down to the fact that I find Hilary to be sympathetic and willing to suffer for the good of her sister and Jackie to be someone who takes from everyone around her for her own self-aggrandizement. It’s not fun to spend this long with a person like this, and so while I find this a film easy to respect in some areas, it’s not one I can claim to have liked or to want to watch again.

Why to watch Hilary and Jackie: The music is good and Rachel Griffiths doesn’t do enough film work, so you should watch her when you can.
Why not to watch: It’s an awful story.

Posted by SJHoneywell at 7:21 PM