Nuke 'Em 'Til They Glow 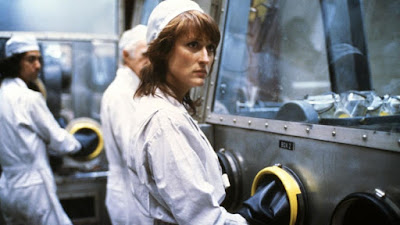 Intellectually, I know that Silkwood is based on the real life of Karen Silkwood. That doesn’t stop the film from feeling like it was written specifically to punch a hole in the nuclear power industry. This movie is Norma Rae with drawn weapons. It’s a film that benefits greatly from a script handled by the great Nora Ephron and a couple of gritty performances including the most understated performance of Cher’s career. It’s a hard movie not to like even if it constantly feels manipulative.

Karen Silkwood (Meryl Streep) works at a nuclear plant in Oklahoma. It should be a place of high security, but it seems to be essentially a factory. The plant is a fuel fabrication site where she makes plutonium fuel rods for nuclear reactors. The plant is behind schedule, forcing everyone to work double shifts, and corners are being cut on almost every aspect of safety. The constant threat of exposure to radiation leads Karen to become involved in the union, much to the consternation of her live-in boyfriend Drew (Kurt Russell) and her other live-in friend, Dolly (Cher).

Her union involvement also causes repercussions at the plant, as the bosses attempt to make her work life more difficult. Karen is transferred to a different part of the plant, which means she can’t get overtime for three months. However, in this new position, she works closely with Winston (Craig T. Nelson), who has been altering the negatives of x-rays taken of the control rods. Essentially, the plant is so far behind that even faulty rods are shipped out and the records doctored to cover it up.

Significantly, Karen is frequently discovered to be contaminated with plutonium. We see three such incidents during the course of the film. The final of these is the most significant, since she reads as contaminated on her way in to the plant, meaning that her plutonium contamination has followed her home. The decontamination process includes brutal showers and wire brushes. We’re given glimpses of this, but thankfully not the full process.

Silkwood benefits from being immediately engaging because of the subject matter. It’s hard not to find a life-or-death struggle compelling, particularly when imminent nuclear disaster is on the line. And it is based on a real story of the real Karen Silkwood. That doesn’t stop it from feeling kind of like a movie of the week, like something that was written to scare Middle America and freak out the populace on the topic of nuclear power.

The film is hugely buoyed by a number of excellent performances. Meryl Streep is Meryl Streep. She’s never bad and almost always much better. Once again, she demonstrates that there is not an accent or a speech pattern that she can’t master. I always like Kurt Russell, and while he’s not in the film much, he’s great on screen. Cher is the real revelation here. Normally Cher is larger than life on screen, even when she’s not doing something akin to her own larger than life persona. Here, she is almost unrecognizable (except for her cheekbones), and she was justifiably nominated for Best Supporting Actress.

There are plenty of smaller roles ably filled as well. Ron Silver has only a few minutes of screen time but is memorable as Paul Stone, a union representative. I am unabashedly a fan of Fred Ward, and seeing him really pull off a believable Native American speech pattern is one of the underrated joys of this movie. David Straithairn is in this for a cup of coffee, and classic that-guy Charles Hallahan makes an appearance as well. The same is true of equally classic that-guy Bruce McGill. James Rebhorn and M. Emmet Walsh round out the that-guy crew.

I won’t deny that Silkwood is a solid movie. It is. But there’s a sense of doom hanging over the entire story. The ending is never really in doubt here even if we might hope for something different.

As a result, Silkwood is difficult to really like. It’s not a film I’d care to watch again. If I wanted to watch something that made me terrified of nuclear power, I’d almost certainly choose The China Syndrome instead. If I wanted to watch a film that involved people wearing containment suits, there are plenty of medical thrillers that will fill the bill and depress me a lot less. On the brighter side, you do get to see Kurt Russell drop Craig T. Nelson with a single punch, so at least there’s that.

Why to watch Silkwood: Atomic energy paranoia on steroids.
Why not to watch: The China Syndrome did it better.