It's Greek to Me 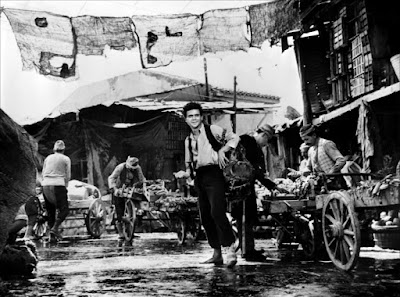 It’s not often that a director breaks the fourth wall him- or herself, but America America opens with director Elia Kazan speaking to the audience. He tells us that this is the film of his family and how his ancestor came to the United States. While it’s not stated overtly, with any story like this, there is certainly a mixture of fact and fancy, of unvarnished truth and unrepentant elaboration and truth stretching. None of that makes the film any more or less compelling, but for Kazan, this story was evidently family legend.

It’s worth noting that America America is about the journey that took Kazan’s ancestor to the United States, which means that the bulk of the film takes place elsewhere, the bulk in Turkey. We start in Anatolia, spend a great deal of time in Constantinople (now it’s Istanbul), and eventually get to a ship that heads off to America.

In Anatolia, we’re presented with a situation where everyone appears equal on the surface, but in reality, it is filled with oppression. The Turks rule the land and the Greek and Armenian minority live in squalor. Stavros (Stathis Giallelis), a Greek, and his Armenian friend Vartan (Frank Wolff) cart ice to the local market and regularly lose a huge percentage of their cargo to Turkish military. An Armenian revolt causes reprisals by the Turks. Wanting their son to be safe, Stavros’s parents, Isaac (Harry Davis) and Vasso (Elena Karam) send him to Constantinople with all of their worldly riches to join the company of his uncle (Salem Ludwig). What Stavros really wants, though, is to get to America to start his life over.

Several things happen. Before he leaves, he meets a man named Hohannes (Gregory Rozakis) who is also trying to get to America. Seeing how poor the man is, Stavros gives him his shoes. When Stavros sets out, he is forced to overpay for passage across a river, and then, when his goods are almost stolen, a local named Abdul (Lou Antonio) helps him recover them. Sadly, Abdul is a thief himself, and slowly robs Stavros blind. Eventually, Stavros is forced to kill Abdul to protect his own life. Eventually, he comes to Constantinople.

Here, Stavros works at a variety of menial jobs, hoping to eventually earn enough money to make passage to America. He starves himself and lives on the streets, saving everything he can, and after nine months, has managed to earn less than 10% of the passage. Even this he loses, stolen by a prostitute who he visited on the advice of his friend and fellow menial, Garabet (John Marley). Destitute again, Stavros goes to live with Garabet, who turns out to be a rebel, which brings down official notice and gets Stavros almost killed.

Eventually, Stavros winds up back with his uncle, who plays matchmaker between Stavros and Thomna Sinnikoglou (Linda Marsh), the daughter of Aleko Sinnikoglou (Paul Mann), a wealthy rug merchant. Aleko’s has only daughters, so he has no son to inherit his business, and his daughters, while sweet, are considered plain and unattractive. Nonetheless, Stavros is forced into a relationship with her, and agrees on a dowry that will buy passage to America. Along the way, he encounters Aratoon Kebabian (Robert Harris) and his wife Sophia (Katharine Balfour), an American couple returning to the states. A brief affair with Sophia gets Stavros on the ship, but also gets criminal charges pressed against him by Aratoon, but an old friend is there to help him, a reward for one of Stavros’s earlier and rare good deeds.

America America is epic in scope, as a film that concerns this story should be. It runs for close to three hours and it feels at times like we have aged years during the running time. This isn’t a knock against the film, In fact, despite its three hour length, it rarely drags. I was worried initially that this would be an indulgent film since it was also such a personal film for Kazan. However, it is packed with story, so much so that it feels like it could have easily have been handled as a miniseries.

The pivotal scene, at least in my opinion, comes when Stavros’s prospective father-in-law explains how he sees life after Stavros marries his daughter. For Aleko, what he outlines is the example of the perfect life: summers at their island home, winters in the city, being waited on by their women, having children and growing older surrounded by comfort and luxury. In fact that would be a pretty good life for a lot of people, but as the description of this continues, it becomes bleaker and bleaker for Stavros. His desire to get away from this world becomes even more overwhelming as Aleko explains what his life will become.

If there is a downside to this film, it’s that Stavros’s mania for reaching America often puts him in the position of doing some very hateful things. He’s a hard person to like even if it’s easy to admire his courage and tenacity. This was the first film for Stathis Giallelis, and he does a hell of a job with a difficult role, particularly since he is in virtually every frame. While all of the performances are good ones, the best following Giallelis are those of Linda Marsh as his sweet but plain fiancée and Katharine Balfour as the bored and lonely wife of the American businessman. There’s a pathos present in both performances (especially Marsh’s) that is truly heartbreaking.

America America is not an easy film to recommend because of its length, but it’s very much a worth watch. It takes a long time for us to finally get to America, but this trip is definitely worth it.

Why to watch America America: A classic immigrant story.
Why not to watch: Stavros is kind of an asshole.

Posted by SJHoneywell at 8:55 PM