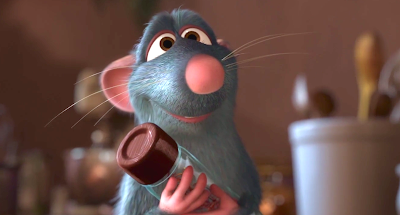 I’ll come right out and say this off the top: I have a pet rat. His name is Captain Guacamole. We used to have Mr. Chips, too, but we lost him in February. I’m a pro-rat person, so in some ways, the success of Ratatouille doesn’t surprise me. I think the little guys are lovable and a lot of fun to have around. Guac likes being held, he’s surprisingly smart and affectionate, and an all-around awesome pet. I’ll probably always have rats because they’re fun critters. But I also realize that I’m in the minority, and that making a movie about a rat seems like a stretch to most people despite Flushed Away from Dreamworks the year before.

Remy (Patton Oswalt) is a rat living in France and like most rats, he loves food. But Remy isn’t content to eat garbage; he wants to eat good food and wants to cook like his hero Auguste Gusteau (Brad Garrett). This puts him at odds with the rest of his huge rat clan, but his highly developed senses allow him to detect rat poison in food, making him the official food tester for the family. When the family’s lair is discovered, they are forced to flee. Remy is separated from the rest of the family and ends up in Gusteau’s restaurant, a paradise of food.

Gusteau, an acclaimed chef, has died and the restaurant has passed into the hands of his former sous chef Skinner (Ian Holm). The word is that Gusteau died from a broken heart caused by the restaurant losing a star at the hands of food critic Anton Ego (Peter O’Toole). Young Alfredo Linguini (Lou Romano) has just been hired as a garbage boy in the restaurant, not knowing that he is actually Gusteau’s son and thus the rightful heir to the restaurant.

The problem is that Linguini can’t cook. When he spills a pot of soup, he attempts to fix it, but Remy notices the problem and actually creates a new soup. Linguini gets the credit for this , much to Skinner’s consternation. When Linguini figures out that it was actually Remy doing the cooking, the two come up with a pact. They figure out a way for Remy to control Linguini’s actions so that Remy is actually doing the cooking in the restaurant kitchen while everyone else thinks it’s Linguini. With the soup a hit, Skinner puts Linguini under the tutelage of Colette Tatou (Janeane Garafolo), the kitchen’s only female chef.

What’s very interesting to me about Ratatouille is that it doesn’t follow a typical narrative structure for an animated film. There is no big problem to solve that gets worked out at the end. Linguini finds out that he’s the heir to the restaurant not at the culmination of the film but in the middle. There is no real conflict driving the movie until the last half hour. Instead, the bulk of the film is about the two worlds that Remy lives in, the conflict between what he is and what he wants to be. That conflict is demonstrated to us by seeing him in the kitchen cooking under Linguini’s toque and in the conversations he has with his brother Emile (Peter Sohn) and their father Django (Brian Dennehy).

One of the things Pixar does better than any other animation studio and generally better than any other film studio in general is create moments of emotional perfection. Ratatouille has one of those moments. It comes when Anton Ego returns to Gusteau’s restaurant to try the cooking of the new chef. His first taste of the title dish is a moment of beauty, of such emotional depth that I continually find myself surprised at how well it works. It works not just because it takes us into Ego’s past, but because it shows in a few seconds how important our connections are to food and how much food means to us. On a base level, food is nourishment. On a much more important level, though, food connects to our memory, to our past, to other people. Food is tied to what makes us who we are, and Ratatouille, without expressing it overtly, drives that message home in a few seconds of screen time.

It’s interesting that last month I commented that just last month I attacked Dreamworks for essentially trying to capitalize on Finding Nemo with Shark Tale the next year. In a way, it could be taken that Ratatouille attempted to piggyback on Flushed Away, a movie about a rat. But that really doesn’t feel like the case. I actually enjoyed Flushed Away, but there’s a reason that if you say the words “movie about a rat” people will think of Ratatouille first. This is what Pixar does. They take a subject that shouldn’t work and they make it magic. Ratatouille is that.

Why to watch Ratatouille: Because rats are awesome and this is surprisingly sweet.
Why not to watch: You’re the type of person biased against rats.

Posted by SJHoneywell at 6:38 PM