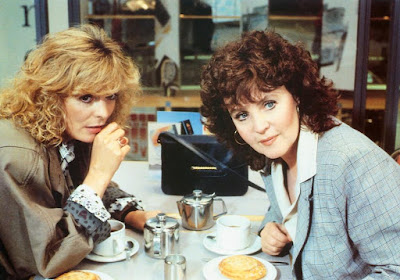 There are a number of movies on NetFlix that are available streaming but not as discs. That means that getting this movies watched is at a premium for me; there have been a few that have moved from “available on streaming” to “shit, now where do I find it?” status for me. Shirley Valentine is one of those films. So, just to make sure that it doesn’t happen here, I watched Shirley Valentine today, not expecting much but a check in another box and one more movie off the list.

Imagine my surprise when Shirley Valentine turned out to be one of my favorite new-to-me movies of this month. This is a movie about a middle-aged Liverpudlian woman having a spiritual rebirth and discovering who she really is. It sounds incredibly dreary and dreadful, but it’s actually quite good. Not the least of the reasons for this are the engaging screenplay (based of a one-woman play by Willy Russell) and the truly masterful performance by Pauline Collins.

There’s a great deal of Alfie in this film in the sense that a great deal of it consists of Shirley (Collins) speaking directly to the camera, and thus to us, the audience. She frequently talks to her kitchen wall as well, and she differentiates between when she’s talking to the wall and talking to us. Shirley is in a rut, and it’s a deep rut. Her life is the same every week. Her husband Joe (a much younger but instantly recognizable Bernard Hill) demands the same food on the same day each week. She remembers a time when her life and her marriage weren’t as routine and dull.

We get a number of these reminiscences of her school days and the early days of her marriage to Joe. Shirley wasn’t much for school, and a lot of her time was spent in a rivalry with Marjorie (Joanna Lumley), who was a teacher’s pet and always had the right answer to everything. She meets Marjorie by accident one day and discovers that Marjorie has a less-than perfect life. Rather than having a fashionable and successful career (in Shirley’s mind, nothing could be more posh than being an air hostess), Marjorie is actually a high-class prostitute and jealous of Shirley’s life.

And then Shirley’s friend Jane (Alison Steadman) wins a two-week trip for two to Greece and insists on taking Shirley. At first, Shirley doesn’t want to go, but eventually she determines that she has spent enough time foregoing the things that she wants, so she goes. On the flight, a man picks up Jane, leaving Shirley alone. At first, Shirley is upset by this, but then she realizes that she’s almost always alone and decides to have fun. After a run-in with some awful British tourists, she spends time with Costas (Tom Conti), a local who promises her that he just wants to take her out on his boat, not “make fuck” with her. Of course, eventually that’s what Shirley wants, since this trip to Greece has become an awakening for her.

Eventually, it’s time for Shirley to go home, and she decides not to. She’s recovered the girl she used to be and she realizes that no one would miss her if she didn’t go home, not even Joe. They’d notice she wasn’t there, but they wouldn’t miss her at all. So she stays, and isn’t bothered when she finds Costas trying the same “make fuck” line. She’s just happy to be alive, even if it turns out that Joe wants her back.

I didn’t expect to like Shirley Valentine much, but two things sold the film for me. The first is that Shirley is a great character. It’s not hyperbole to say that she’s become one of my favorite film characters. She’s a bit off-putting for the first 10-15 minutes, but is soon incredibly engaging. The second factor is Pauline Collins, who is an absolute treat. There are questions sometimes when a film gets only an acting nomination and nothing else or for a lesser award (this was nominated for Best Song as well). The fears are unwarranted: Collins is very easy to like in this role.

It just goes to show that every movie deserves a fair shake. I expected Shirley Valentine to be a long, slow slog and I found myself enjoying it tremendously. I’d have preferred a less open ending. Instead of closure we get some question marks, and I like Shirley enough to want to see exactly where she ends up. Beyond that, I recommend it wholeheartedly.

Why to watch Shirley Valentine: It’s surprisingly engaging and Shirley is a charmer.
Why not to watch: The ending is disturbingly open.