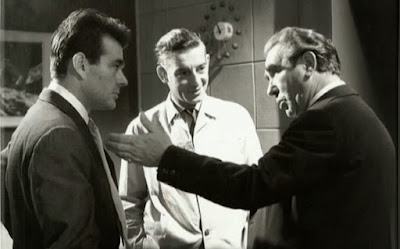 Directors, at least the ones who are interested in more than money, often want to take on difficult subjects. The Mark is certainly that sort of film. I knew very little about this going in except that it was about a criminal looking to make a new start in life and encountering a series of difficulties. What I didn’t know is that this is not merely a film about a criminal. This is a film about a sexual predator that has evidently reformed and is weighed down by the enormity of his past crimes.

We’re introduced to Jim Fuller (an Oscar nominated Stuart Whitman), our ex-con, as he begins his first day on a new job. His boss Andrew Clive (Donald Wolfit) is aware of Jim’s past but has decided to give him a chance, thanks to the assurance of Jim’s therapist, Dr. Edmund McNally (Rod Steiger). Jim frequently goes to talk to Dr. McNally as a part of his continued therapy and treatment. McNally is convinced that Jim has his troubling past behind him and that he deserves this new lease on life.

Jim slowly adjusts to life on the outside after three years in prison. He takes a room with an older couple (Brenda de Banzie and Maurice Denham) and appears to be adjusting well. Slowly, through Jim’s conversations with Dr. McNally and a series of dreams and flashbacks, we start to understand exactly what Jim was in prison for. At one point in his past, he found himself attracted to younger and younger girls, and eventually almost kidnapped a 10-year-old with sexual intent. He never went through with it, but was caught and sent to prison.

This, we are repeatedly told, is behind him. He finds himself attracted to Ruth (Maria Schell), the secretary where he works. Ruth is aware that Jim had served time but does not know his crime and prefers not to be told. Ruth also has a young daughter (Amanda Black), who would normally be a temptation for Jim, but he finds that those urges seem to have subsided.

The first half of the film continues in this manner until a couple of events happen in rapid succession. The first is that a young girl in the area is kidnapped, sexually abused, and dies of her injuries. Jim is naturally questioned about this, but has a solid alibi. When he leaves the police station, he is accosted by a newspaper reporter named Austin (Donald Houston) who covered his original trial. Looking for a story, Houston begins tailing Jim surreptitiously, and gets his story when he spots Jim alone with Ruth’s daughter at a carnival. And suddenly, Jim’s life unravels as quickly as it had the first time, except that this time, he’s done nothing wrong. The court of public opinion is a brutal one, though, and Jim has already been found guilty.

It feels like there is a lot to cover with The Mark. The three principle performances are good in general, with Stuart Whitman giving a surprisingly sympathetic portrayal of a man who once fantasized about children. It’s also surprising to me that this subject matter would be tackled in 1961. In many ways, though, this is the natural progression from films like Peyton Place. The Mark is in many ways a “tough issue” movie trying to put a face on something really terrible and trying not to scare the public but to make that portrayal one that turns on empathy.

The psychology isn’t very good, though. It feels pie-in-the-sky to think that someone with this type of deviant sexual predilection would be cured by a few group therapy sessions and regular consultations from a doctor. This fact may be what has kept The Mark unknown to more modern audiences. The premise simply doesn’t work.

In a another way, though The Mark is actually prescient. One of the recurrent themes here is that Jim Fuller’s life has been ruined by a single bad action and that bad action continues to come back to destroy his life. This is not uncommon in the world today with a 24-hour news cycle and social media. A single unpleasant remark or a poorly thought-out action is the sort of thing that can destroy a life and will stay around to haunt the victim forever. How many lives have been destroyed by a careless tweet or a badly conceived email that suddenly went viral?

What we end up with is a film with a potentially interesting story and some very good performances that is spoiled by some bad psychology. If you can live with the less-than-satisfactory science, The Mark is an interesting character study and an equally interesting look at the way ideas and opinions spread from person to person.

Why to watch The Mark: A compelling portrait of a difficult subject.
Why not to watch: The psychology feels about 50 years out of date.

Posted by SJHoneywell at 6:16 PM