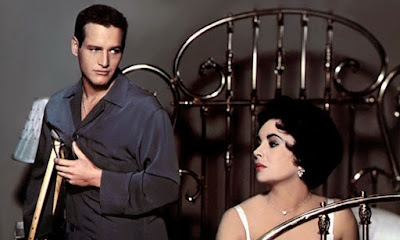 It seems funny that after more than five-and-a-half years of blogging that I needed to somehow kickstart myself back into doing a review. Oh, sure I’ve had reviews up for the past week or more, but with one exception, I wrote those before my vacation. I just haven’t been feeling the Oscar lists lately, and with work to catch up on, movies definitely took a back seat. I figured the best way to jump start myself was to watch a true classic, a movie that I could almost guarantee that I would like. I wanted something with a lot of critical acclaim and that I’d heard only good things about. Cat on a Hot Tin Roof, nominated for five of the seven awards I care about seemed like a good choice. And let me tell you, I chose well.

Like pretty much every other Tennessee Williams play or movie based on a play I can reference, Cat on a Hot Tin Roof is all about the South and all about the messed up relationships in a family. The Pollitts certainly qualify as messed up. The occasion of the story is the 65th birthday of Harvey “Big Daddy” Pollitt (Burl Ives), a self-made man who has made a fortune and built himself a plantation encompassing tens of thousands of acres of farmland. Big Daddy has returned home after a stint in the hospital, where he was told that he has only a spastic colon. In truth, he has terminal cancer, a fact disclosed several times in the film by the doctor (Larry Gates), but hidden from the man himself.

Orbiting Big Daddy are his wife Ida “Big Momma” Pollitt (Judith Anderson), son Cooper “Gooper” Pollitt (Jack Carson) and his wife Mae (Madeleine Sherwood), and son Brick (Paul Newman) and wife Maggie (Elizabeth Taylor). Gooper and Mae are certainly important characters, mainly as foils throughout. The true meat of the story is the relationship between Maggie and Brick and between Brick and Big Daddy.

The real guts, though is what has happened in Brick’s life. We learn quickly that Brick is a drunk and that his relationship with Maggie has fallen apart completely. Brick was once an athlete and started his own football team with his friend Skipper, who killed himself under mysterious (at least initially) circumstances. There was also something of a relationship between Maggie and Skipper, which has caused tension in the marriage. It’s implied but never stated that Brick and Skipper may have had a homosexual relationship. I admit that it requires some reading into the film to get this, but I think it’s intentional.

Initially, I didn’t understand a lot of the nominations here. For much of the film, it’s all about the contest of wills between Big Daddy and Brick. I’m still mildly surprised that Burl Ives was not nominated for this role. As it happens, he won the Oscar for Best Supporting Actor for this year, but for another movie. That makes the case for Ives having as good a 1958 as anyone, because he’s magnetic on screen. He’s a hateful old man through most of the film: angry, blustering, and mean. Newman earned his first Oscar nomination for this role and I will not be the person who says that he didn’t earn it. This is Newman at his best, standing cool but with roiling emotions under the surface.

But I didn’t understand the nomination for Elizabeth Taylor until the second half of the film. Oh, she’s good in the first part, but she’s also only got a couple of meaningful scenes in those first 45 minutes or so. It’s not until we start getting into the heart of Brick’s drinking and his past relationship with Skipper that Taylor really comes into her own and provides a performance that matches those of Newman and Ives.

One thing that Cat on a Hot Tin Roof does very well is provide us with unlikeable characters who we slowly come to understand. By the end of the film, we still may not like any of the six main characters, but we’ve figured out what motivates them and have reached something like an emotional tolerance for at least five of them. Frankly, Mae is a hateful character, and she’s supposed to be. The others may not really be any better than Mae, but we’re given the opportunity to see them be something other than selfish and petty, and that goes a long way.

In truth, the most off-putting thing about Cat on a Hot Tin Roof is the ending. I won’t give it away save to say that it definitely ends on an upbeat. I’m not used to that from Williams. I was frankly expecting doom, gloom, and additional family explosions until the very end. If I didn’t know better, I’d suggest that this was a Hollywood rewrite, since Williams didn’t often do endings that made everything okay. It's sort of like a Southern version of Death of a Salesman, but if everything turns out.

I guess my other complaint is that there are moments that make it obvious this is adapted from a play. This isn’t a serious issue, though. Sometimes, a film is good enough that I have to struggle to find something I didn’t like. Director Richard Brooks does as much as he can to move this into the cinematic realm and does it well for most of the film’s running time. Some lines of dialogue just don’t work as movie lines, though, so now and then the spell gets broken.

That doesn’t matter, though. There’s a reason this is thought of as one of the greats of its year and its decade.

Why to watch Cat on a Hot Tin Roof: Every performance is a career maker.
Why not to watch: It’s not at all a Tennessee Williams ending.

Posted by SJHoneywell at 5:54 PM