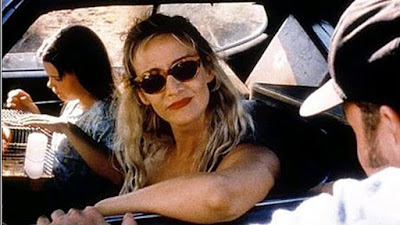 I don’t really know Janet McTeer as an actress, so I was curious about the rare film Tumbleweeds. Mostly, I was curious about why it’s evidently so rare. I couldn’t find this on NetFlix or at any of the libraries I use, and even interlibrary loan wasn’t enough to locate the film for me, which forced me to resort to the internet. The version I found had a couple of strange gaps in the sound, but you take what you can get. With Tumbleweeds, this is what I could get.

The film opens with a fight between Mary Jo Walker (a nominated Janet McTeer) and her fourth husband. Early-teen daughter Ava (Kimberly J. Brown) has evidently seen this before, because she’s already packing her bag while the fight goes on. In fact, she’s just about fully packed when Mary Jo walks in and tells her to pack because they’re leaving. She’s got better places to be than here. We soon learn that this is Mary Jo’s typical life choice. She shacks up with the first guy who looks promising and bolts when the going gets rough.

Eventually, at Ava’s insistence, they wind up in California. Things initially look up for Ava. Mary Jo gets a job in an office and Ava starts to make friends at her new school and gets involved with the school's theater department. Mary Jo soon repeats her pattern, though, hooking up with truck driver Jack Ranson (director Gavin O’Connor) and soon moving in with him. By this point, Ava has learned not to expect too much from her mother, figuring that soon enough they’ll be hitting the road once the initial honeymoon is over. Meanwhile, Dan Miller (prototypical “that-guy” Jay O. Sanders) shows a little interest in Mary Jo and Ava (and not in a creepy, stalkerish way).

Tumbleweeds is a film that works in spite of everything that happens in it. There are no real surprises here. This is very much a movie of the week in terms of plot. I’m a little surprised that I didn’t find this in regular rotation on Lifetime (and, in fact, it may be in regular rotation there). Once the basic elements are set up, there’s no mystery where it’s going. Jack shows all of the initial signs of being abusive or at least ill-tempered. When Mary Jo and Ava spend a day at the beach while he is off driving a truck, he surprises them by coming home and making dinner. He takes it personally when he finds out that they have already eaten, expecting him not to be home. The arguments start sooner than expected, which is hardly a shock for anyone who’s seen a movie before.

It’s also got a happy ending built into it the minute we first come across Dan Miller. Dan doesn’t show up in Mary Jo’s initial scenes at her job. No, his first appearance is an interaction with Ava as she is hanging out at Mary Jo’s work. Dan is immediately pegged for us as a nice guy. He takes an interest in what Ava is doing, he’s smart, and he’s decent. If you think you’re supposed to want Mary Jo and Dan to somehow end up together, well, this is precisely where the movie is taking us.

That really is the biggest issue with Tumbleweeds: it’s predictable to a fault. There are almost no surprises after the first 20 minutes or half hour. We can guess that Ava’s falling out with her friend is going to either be resolved by the end or is going to be discovered to be a non-issue when Ava turns up with newer, better friends. We know that Mary Jo is going to have some sort of revelation about where her life is headed, and that she’s going to make a change for Ava, who she has emotionally ignored without really realizing it.

What saves the movie completely is the twin performances of McTeer and Brown. The two have a real mother/daughter chemistry. Their relationship works entirely throughout the film. We’re almost tempted to really like Mary Jo for being spunky and a free spirit and we’re absolutely willing to buy into Ava’s frustrations with her mother and their lifestyle. The two of the work very well together, almost as if they’re not really acting.

At its heart, Tumbleweeds is the story of one kid who wants something approaching a normal life and her selfish but loving mother. There’s no question that Mary Jo loves her daughter, but Mary Jo also acts always in her own self-interest. She’s incomplete without a man, and so when she leaves one man she immediately clings to the next one available, right or wrong (mostly wrong). She’s not aware until well into the film that this has real consequences on Ava.

The problem, and it’s what ultimately takes this from being a decent movie inan terrified of stability, and I don’t buy her change of heart for Ava’s sake for a second, even if I never doubt her love for her daughter.

Ultimately, this is one-and-done for me. I can’t think of a good reason to watch this again, so I most likely never will.

Why to watch Tumbleweeds: Janet McTeer should be better known. So should Kimberly J. Brown.
Why not to watch: Beyond the performances, it’s a standard domestic drama and very easy to predict.