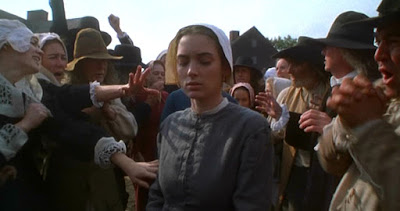 Say the name Arthur Miller and most people will jump to Death of a Salesman. I’ve seen a bunch of different versions of that play, and while it’s a good play, I’m more or less over it. The Crucible is one that I’d heard of and knew a little about, but it’s not one I had seen until today. The Crucible, like any good play, is about a lot more than it claims to be about. On the surface, this is a story about the Salem witch trials and the hysteria that surrounded the area during that time. In reality, it’s about HUAC and the Hollywood blacklist, so it works both as a story and as allegory.

So, obviously, we’re in Salem, Massachusetts several hundred years ago, and everyone’s a Puritan. That presents a problem in the opening scene, since a large number of young girls have run off to the forest to participate in some sort of magic ritual headed by a slave named Tituba (Charlayne Woodard). Most of the girls ask for spells to make young men of the town fall in love with them, but Abigail Williams (Winona Ryder) kills a chicken, drinks its blood, and asks for the death of Elizabeth Proctor (Joan Allen). The girls are discovered by the town minister, Samuel Parris (Bruce Davidson), and two girls including his daughter become comatose.

Naturally, based on the time and religious beliefs of the community, demonic possession is considered the cause, and Reverend John Hale (Rob Campbell) is brought in from a nearby town to begin questioning the inhabitants of Salem. What Hale doesn’t know—in fact what no one knows—is that all of this stems from the actions of chicken-blood-drinking Abigail Williams. It seems that she and Elizabeth Proctor’s husband John (Daniel Day-Lewis) had a short affair that John ended. But Abigail wants him back by any means necessary, including witchcraft that will kill off Elizabeth and eventually naming Elizabeth as a witch.

Naturally, everything spirals out of control and accusations start flying around the town as the young girls who were dancing start naming people they claim they witnessed in the company of Satan himself. Samuel Parris gets in on the act as well, since there are a number of people who own land he would like. Eventually, things get so bad that a judge (Paul Scofield in his final film role) is called in to oversee things and get to the heart of the demonic possession running rampant in Salem.

Naturally, there’s a lot going on in The Crucible, and it’s worth looking at on several different levels. On the level of the narrative that we are presented, The Crucible is a straight indictment of religion. All of the moments of the various hearings and trials devolve into instances of one person making claims against another, and since these claims are of witnessing to spiritual events, there is no way to ascertain the actual truth, at least in the eyes of the court. And so the court naturally takes the side of the accusers in all cases, accepting any story that is offered and demanding substantial proof from those who stand accused. Abigail uses this to her advantage, playacting in places to convince the court of her various accusations and to keep those fingers pointed away from herself. It’s an interesting study in psychology in that respect, and a study in the means of manipulation.

But The Crucible exists on another level as well, one of allegory referring to the McCarthy era and the metaphorical witch hunt that occurred in Hollywood in the 1950s. There is a reason that those in the film are required to name names of others who might consort with the devil. Additionally, those who admit their guilt are set free while those who maintain their innocence (and who are, of course, innocent) are punished to the fullest extent possible under the law. This is a case of power run amok, either religious power or governmental power (or, really both in the case of Salem since they were essentially one and the same). There is no standing against the machinery of the state and surviving in these days in Salem.

This is a solid cast all the way around, and even the minor roles are well handled. Joan Allen was nominated in a supporting role, and she casts a solid shadow over much of the proceedings despite not being on screen much. Strangely, it feels like a lesser role for Daniel Day-Lewis. Oh, he’s watchable, certainly, but it doesn’t seem as if his heart is completely in it during the first half of the film. Winona Ryder is similarly fine, albeit a bit over the top in a few sequences. Still, that’s what the script calls for and she delivers.

Director Nicholas Hytner is better known as a stage director. That’s interesting to me here because one of the more notable things about The Crucible is that it doesn’t specifically look like a stage play. Hytner uses locations well and gets a great deal of use out of his camera, using it to heighten aspects of some scenes in a way that would be impossible on a stage. Had I not known The Crucible was based on Miller’s play, I might not have known this was adapted from a theatrical work. Frankly, that’s the highest praise I can give a dramatic adaptation, at least in terms of the director’s position.

As a non-religious person, and often an anti-religious person, I’m predisposed to like the story. As a skeptic, I’m also prone to like the film’s message about the damage faith can cause even if that wasn’t Miller’s intent. The nominated screenplay, adapted by Arthur Miller himself, is the best part of a solid film. While there’s a lot to like here, though, I’m not sure how soon I’d watch it again. The ending is a little hard to take, even if it is the most realistic and believable ending we could expect to get under the circumstances.

Why to watch The Crucible: A story that still resonates.
Why not to watch: If you’re religious, this is going to hit you where you live.