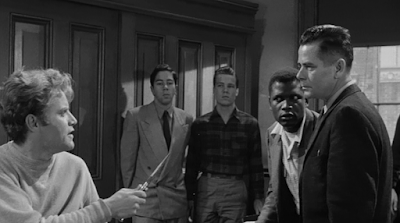 There’s a weird little subgenre of dramas that take place in troubled schools. Lean on Me, Stand and Deliver, To Sir with Love, Dangerous Minds, Freedom Writers…even pseudo action movies like The Substitute are based on this premise. The granddaddy of the genre is Blackboard Jungle, one of the first movies ever to have a rock soundtrack. It even beat classic Rebel Without a Cause by a good six months.

Blackboard Jungle also launched a few careers. This was the first film for Vic Morrow, who allegedly beat out Steve McQueen for the part. It was also an early film in Sidney Poitier’s career, a role he evidently got by beating Lou Gossett, Jr. The other new face in the crowd is a young actor named Jameel Farah, who eventually changed his name to Jamie Farr.

Blackboard Jungle is based on the experiences of Evan Hunter, although I can only thing that they are made more extreme for the sake of the movie. Richard Dadier (Glenn Ford) gets a job teaching English in an inner city high school. Since this is the birth of the trouble teens in school genre, there’s no shock that this high school is one where perhaps one student in 100 pays attention and cares. Yep, that’s what this is going to be. Dadier has a pregnant wife named Anne (Anne Francis), and the job is exactly what he needs to help support his growing family.

But things naturally aren’t going to be easy. His class has a collection of hard cases led by two students in particular: Greg Miller (Sidney Poitier) and Artie West (Vic Morrow). Dadier, who is immediately dubbed “Daddy-o” by his students, decides that Miller is the kingpin for this group of students and immediately sets his sights on getting him to cooperate in the classroom. Not much seems to work for him, and the students all seem to want nothing more than to be out of control.

This extends to areas outside the classroom as well. On the first day of school, new teacher Lois Hammond (Margaret Hayes) is sexually assaulted by a student only to be rescued by Dadier. Shortly thereafter, Dadier and fellow teacher Joshua Edwards (Richard Kiley) are attacked by a gang of students when leaving a bar. An unnamed student accuses Dadier of making racial slurs in class, and starts sending letters to Dadier’s house about an affair between him and Lois Hammond. And through it all, Dadier struggles with deciding if staying in this, well, jungle is worth it to him when there is a much safer, better school with a job offer just waiting for him.

The “troubled high school” subgenre isn’t a particularly deep well, but there are really only a few places this can go by the end. I predicted an ending and was pretty close to where it went, although I made a guess for a much more tragic ending than we receive. Other parts of the film are incredibly easy to predict, though. The minute Joshua Edwards talks about bringing his irreplaceable jazz record collection to the school, there’s no mystery when that scene doesn’t end well for him.

But it’s fair to give Blackboard Jungle a little license here. This was the start of this style of film, after all (although Zero de Conduit could be brought up), and even if it’s not the original troubled school, it’s the first one in an urban setting and a more modern age, at least to my knowledge. In that respect, since it’s setting the tone and the conventions of the genre, it’s fair to cut it a little slack in terms of predictability and plot points.

The biggest issue with Blackboard Jungle is that it hasn’t really aged well. There have been too many movies in this vein and too many dramas about disaffected youth for this to retain the power it had in 1955. On the other hand, it’s plainly easy to see exactly why this was such a powerful film in 1955. I can imagine that audiences hadn’t really seen anything like Blackboard Jungle and it certainly would’ve been more than a little shocking to the people of middle America.

My only other real complaint here is a common one for this era of films. Sidney Poitier was 28, playing a high school student, and he can just barely pull it off. Vic Morrow at 26, on the other hand, looks 26. In fact, most of the students were in their 20s during the filming. In a small way, it damages the credibility of the film when we can’t believe the high school students are really high school students.

Blackboard Jungle really needs to be viewed from the perspective of when it was made. It doesn’t work as a modern film, but it very much works as something from the heart of Eisenhower’s America.

Why to watch Blackboard Jungle: It’s formative for its entire subgenre.
Why not to watch: There are parts of it that are pretty ridiculous.