Film: Talk of the Town
Format: DVD from Sycamore Public Library on laptop. 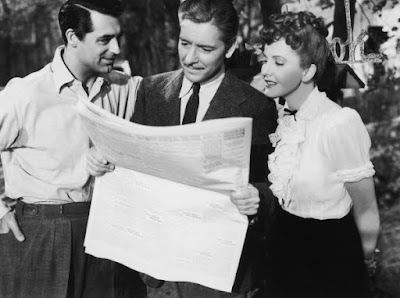 Talk of the Town is a film that’s going to play with our expectations in the opening 10 minutes. This starts off like a film noir that will pit a dangerous criminal played by Cary Grant against a terribly vulnerable Jean Arthur. And while there’s drama aplenty here, it’s not long before a film that starts with arson, murder, and a prison break quickly becomes a dramatic romantic comedy with a love triangle. Believe me, I’m not complaining.

Here’s the set up: Fire! Burning buildings! Spinning headlines! A factory has burned down and it looks like arson. The foreman of the factory has been burned to a crisp with only an athletic medal he won for shotput left behind in the ashes. Factory owner Andrew Holmes (Charles Dingle) blames notorious organizer and rabble rouser Leopold Dilg (Cary Grant), who is promptly arrested. In probably the least-dramatic escape in film history from the most minimum security prison, Dilg overpowers his guard and escapes, ending up at the rental home of Nora Shelley (Jean Arthur), the woman he’s always had a crush on. His ankle hurt in his escape, Leopold has nowhere else to go. But Nora is prepping the house for a summer renter who arrives minutes after Leopold and a day early. The renter is Professor Michael Lightcap (Ronald Coleman), a law professor who is being considered for placement on the Supreme Court. Yes, that Supreme Court.

Anyway, Nora (or “Miss Shelley” as she is generally referred to) doesn’t think Leopold is guilty and knows that the local court system is entirely corrupt. She also knows that the judge trying the case is notoriously in the pocket of Holmes, the man who owned the burned-down factory. She also happens to be friends with Leopold’s lawyer Sam Yates (Edgar Buchanan), who happened to have gone to school with Professor Lightcap. Sam convinces Nora to stash Leopold, but eventually he’s going to run into the professor. When he does, Nora spins the tale that Leopold is actually Joseph, the gardener.

What follows is a battle of wits, a treatise on the real purpose of law, and a romantic triangle between the professor, Leopold, and Nora. See, Professor Lightcap is convinced that the law is essentially always right and that the law is always upheld. Leopold knows from recent personal experience (c’mon, you didn’t think Cary Grant would be really cast as a murdering arsonist, did you?) is sure that principles are all well and good but that looking at the law from an ivory tower offers a skewed view of reality. Nora does her best to keep the police out of the house and even becomes Lightcap’s private secretary for the summer to keep an eye on things, at least until Lightcap’s assistant Tilney (Rex Ingram) arrives to assume his normal duties.

So let’s get some of the important stuff out of the way. Talk of the Town is too serious to be a real comedy. Any film that ends with a serious dissertation on what the law is and should be doesn’t really qualify to be called a comedy. On the other hand, there are many aspects of this film that are right in line with not just comedy, but screwball. Normally, this would be where I complain that Talk of the Town doesn’t know what it wants to be, but that’s not the case here. It’s got a bit of a multiple personality, but it manages to pull it off believably and well. Okay, believably aside from the completely bonkers plot.

Much of this is the strength of the three main members of the cast. I’m a long-time Cary Grant fan, so having him be watchable is hardly noteworthy. While Grant had a dandy career before Talk of the Town, I don’t know that he’d really come into his own as the actor he would become for this film. But he was on his way, and a lot of his brilliant comedic timing and reactions are on display here. I’m also a fan of Jean Arthur. I don’t consider her one of my classic film loves (she’s no Babs Stanwyck or Myrna Loy), but few other actresses of any era have seemed like people I’d want to just hang out with more than Jean Arthur. I love her on camera. I don’t know what she was like as a person outside of movies, but inside of them, I always find her entertaining—and truthfully, her comedic timing is every bit as good as Grant’s. That’s saying a lot.

At first blush, Ronald Coleman seems like the week link. Coleman played plenty of straight dramatic roles, men of integrity and (at times) action and adventure. Placing him as one of the points of a crazy love triangle seems like weird casting, but it’s casting that works. Michael Lightcap is a stuffy academic, and that’s precisely the sort of actor needed here. Coleman holds his own solidly with Grant and Arthur specifically because he comes across as someone who starches his underwear and wears both a belt and suspenders.

I also want to comment on the role of Rex Ingram as Tilney. Seeing a black man in the role of a servant is nothing new in 1940s films, but the role of Tilney is much more than that. This is not a “Stppin Fetchit” role by any means. Tilney is a gentleman’s gentleman, a man of taste and decorum. This is a man who weeps when his employer shaves off a beard of 15 years, and to whom that employer goes for important life advice. He’s an American Jeeves, and I don’t know if there is higher praise possible. The ‘40s weren’t generally advanced racially, but the role of Tilney being seen as a man of stature in his own right—a man who sees the success of Lightcap as his own deserved success—is a step forward.

Talk of the Town won’t set the world on fire, but it is entertaining. I enjoyed watching it immensely, and I like that it waits for the last couple of minutes to let us know which way the romance will end. I won’t spoil that here. It’s worth seeing to discover the answer for yourself.

Why to watch Talk of the Town: A perfect blend of comedy and serious business.
Why not to watch: Like many a comedy in general, the plot is pretty far out there.