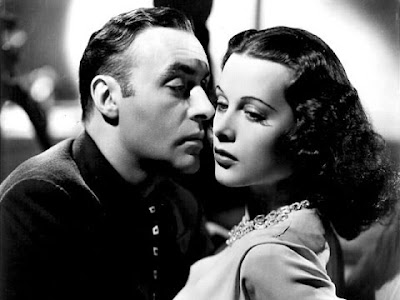 Sometimes you watch a remake knowing it’s a remake. Sometimes, that sneaks up on you. In the case of Algiers, I discovered this was a remake a few moments after the credits. I had no idea going in that I’d already seen this, but once the text crawl started, I knew I was covering familiar territory. Algiers is an almost shot-for-shot remake of Pepe le Moko from the year previous. Evidently, producer Walter Wanger bought not only the rights to Pepe le Moko but also as many prints as he could to prevent it from being competition for his production of Algiers. Fortunately, he didn’t buy up all of the copies of Pepe le Moko, since it is a superior film in virtually every regard. In fact, the only things we get from Algiers is that it’s evidently the source of cartoon character Pepe le Pew and was Hedy Lamarr’s American film debut.

Don’t get it mixed up here: Algiers is a virtually shot-for-shot remake of Pepe le Moko. The character names are the same, the plot is the same, even the music is reused from the original film. The only changes are the cast, the fact that it was shot in English, and the ending. Even that change isn’t so much a change in what happens but a change in how it comes about. Apparently, director John Cromwell would screen a piece of the film for the cast and then instruct them to duplicate what they’d seen as much as they could. This might be the most unnecessary film until the shot-for-shot Vince Vaughn/Anne Heche remake of Psycho.

If you’ve seen Pepe le Moko, there’s not a lot for you here. If you haven’t, it’s pretty easily summarize. Expert thief Pepe le Moko (Charles Boyer) has made it out of France and come to Algiers in Algeria. Here he has hidden out in the Casbah area, since it is essentially a place where the police have no power. Here he has shacked up with Ines (Sigrid Gurie) and made friends with Grandpere (Alan Hale) and Pierrot (Johnny Downs), does his best to avoid police informant Regis (Gene Lockhart), and even cultivates a friendship with Slimane (Joseph Calleia), a cop who sort of works in the Casbah.

Everything changes with the arrival of Gaby (Hedy Lamarr), who is immediately entranced with Pepe and vice versa. The bulk of the film involves Slimane and the police attempting to get Pepe out of the Casbah while Pepe and Gaby attempt to meet up with each other. Pepe is entranced enough with her that he doesn’t bother to hide it, even going so far as to talk about her in front of Ines. And eventually it ends.

I honestly have nothing against Charles Boyer. In fact, I rather like him. He’s just no Jean Gabin and he couldn’t be. The bigger problem is Hedy Lamarr. To my knowledge this is the first movie I’ve seen with Hedy Lamarr in it. I can only hope that she got better as her career progressed. In Algiers it looks as if her acting coach was a large piece of balsa wood. I won’t for a second impugn her beauty, but she couldn’t act her way out of a burlap sack.

I’m disappointed completely in this. It’s been sitting on my DVR for about a year, and now I wonder why I bothered. Had this not been on one of my Oscar lists, I’d have turned it off 20 minutes in once I realized it was not merely a remake but a carbon copy of a film I had already seen. The hell of it is that I didn’t even like Pepe le Moko that much. I don’t dislike the film, but it’s not one that I’m excited to see again. The story is too simple and the love between Pepe and Gaby too sudden and too strong to be believed.

I’m struggling to find a good reason that I spent 95 minutes watching this today and I’m coming up empty. In fact, only Gene Lockhart matches the original version as Regis. If you want to watch this story, Pepe le Moko is the version to watch. It’s not only first, it’s better.

Why to watch Algiers: You’re a Charles Boyer completist.
Why not to watch: Pepe le Moko is better, and it’s not that great.

Posted by SJHoneywell at 6:21 PM