Like many from several different generations, I grew up reading, among other things, the Narnia books by C.S. Lewis. I didn’t get a lot of the religious imagery when I was a kid, and then re-reading them as an adult, I kind of wonder how I missed it, since Lewis applied his symbolism not with a brush, but with a trowel. Still, it’s hard for me not to claim that the books were formative for me in many ways. Despite being a heathen these days, I still love them. This is despite the fact that it’s easy to forget that the actual battles are only a page or two long and the bulk of the books is actually British kids walking around a countryside hoping that they get someplace with sandwiches. 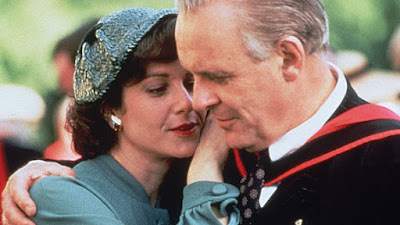 It’s also worth mentioning that most colleges have a rare books collection. For instance, my alma mater has, among other things, a collection of dime novels and the papers of H.P. Lovecraft, which is damn cool. Wheaton College, in the town where I grew up, has a C.S. Lewis collection and even has his wardrobe, which I’ve seen. So I admit that while I expected (and got) a decent slice of religion from Shadowlands, which is about Lewis’s marriage, I was also pretty interested.

Shadowlands really is pretty much about the marriage, first of convenience and then of love between C.S. Lewis (Anthony Hopkins) and Joy Davidman (Debra Winger). We do get a slice of Lewis’s theology here, but it’s done in a very interesting way. We start with Lewis sermonizing on the value of pain, calling it God’s megaphone used to rouse a sleeping world. Lewis is depicted as a man comfortable with his life and with himself. He has settled in at Oxford and lectures, writes his books, and lives a comfortable life with his brother Warnie (Edward Hardwicke). In many ways for him, the idea of pain is something he has dealt with (the death of his mother when he was nine), but also something that more or less exists theoretically for him.

Enter Joy Davidman and her son Douglas (Joseph Mazzello). While visiting England, Davidman arranges a meeting with Lewis. She is an accomplished poet and her son is a fan of Lewis’s books. The two meet and slowly become friends, her brash American ways overcoming his more staid and reserved Englishness. During these initial meetings, she admits to him that she has come to England to get away from her husband, who is a serial adulterer and who wishes a divorce. After Joy and Douglas spend Christmas with the Lewis brothers, they return to the States and life goes on.

At least until Joy suddenly reappears, now divorced and looking for a new start. A part of that new start comes with a unique request. She wants to marry Lewis so that she can obtain citizenship. She makes not demands on him beyond the ceremony, and, as a friend, he agrees. Shortly after this, Joy collapses and is diagnosed with cancer that has advanced significantly. As he watches her suffer, Lewis realizes that he genuinely does love her and wants to marry her not just in the civil ceremony they had, but a true wedding. And, we assume, watching someone he loves going through terrible and seemingly needless pain, perhaps readjusting his beliefs on the value of pain.

So let’s get to the heart of this. There are only a couple of performances here on screen for more than a few minutes. There is a nice episodic relationship between C.S. Lewis and Peter Whistler (James Frain), one of his students. There is also an interesting relationship between Lewis and friendly Oxford rival Christopher Riley (John Wood). But beyond these, it’s all about C.S. Lewis, his brother, Joy Davidman, and her son.

Edward Hardwicke is good—he’s a gruff old man who is set in his ways, but he’s also grudgingly sympathetic to Joy and especially her son. His Warnie comes off as the sort of man who is a fuzzy teddy bear underneath his armor. Joseph Mazzello’s Douglas is actually quite good. Children as actors are often a crapshoot, but he works well throughout, first as a kid who is a bit starstruck, and later as a child dealing with the terminal illness of a parent. When he attempts to sneak into the wardrobe in the attic, it is a little heartbreaking.

Anthony Hopkins works well as C.S. Lewis, and this is hardly a shock. The man is an astonishingly versatile actor, and Lewis was right in his wheelhouse. He, like his brother, starts as someone aloof and not really wanting to be involved in much in the way of an emotional commitment. By the end, the man is completely shattered. But for as good as Hopkins is, this is Debra Winger’s film. I’m not sure she always got roles that allowed her to really show her range, but this might be her finest work on film. I love that she was nominated for this role.

So, final analysis is that Shadowlands is a little heavy on the religion for me, but it kind of has to be. It’s not a film I’m willing to say I enjoyed because it’s not really a film that is that happy. But it is rather beautiful and I’m glad I saw it.