Saying One Thing and Meaning Your Mother 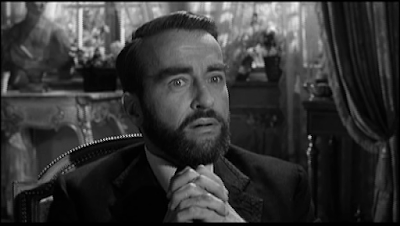 When I started reviewing movies on this blog in 2010, I didn’t have a particularly high opinion of Montgomery Clift. Honestly, I think I was just unlucky in picking movies of his I didn’t like much, or roles of his I didn’t like much. As the years have gone by, I’ve discovered I have an appreciation for the man’s work. With Freud (also known as Freud: The Secret Passion), pretty much everything is about Clift and his performance. If he can’t hold the movie together, there’s nothing to hold together.

That’s an issue here, because I’m not a huge fan of the work of Sigmund Freud (played by Clift). I realize that it was in vogue for a number of years, but as far as I know quite a bit of it has been seen as the first blind stabbings into the inner workings of the mind. Freud may have been onto a few things, but for a long time Freudian analysis was considered a panacea for mental disorders, and it’s certainly not that. Not everything is driven by sexuality and not all mental illnesses are caused by repressed memories. That’s not what this film would have you think, incidentally.

Freud doesn’t cover all of the ins and outs of all of Freud’s work. There’s no mention of the id/ego/superego here. Instead, the film covers the important years of the development of Freud’s various theories and (one presumes) fictionalizes at least partly the account of his ideas of the Oedipal complex he accuses everyone of having. A substantial amount of his work seems to stem from his time with a patient named Cecily Koertner (Susannah York). Most of what doesn’t come from her comes from his own analysis. There’s a little bit that comes from an early analysis of a man named Carl von Schlossen (David McCallum), but the majority stems from Cecily’s relationship with her parents and his own relationship with his parents.

The film also dips into dream analysis, which means that we’re going to get some unusual and surreal dream sequences, both from Freud himself and from Cecily Koertner. Additionally, and inexplicably, there are instances of inner narration from Freud, but spoken by director John Huston instead of Montgomery Clift. It’s a little weird.

I’m not sure what I was expecting with Freud. I think I expected this to be either a hell of a lot weirder than it is or a hell of a lot more like a straight biopic. It’s somewhere in between. It naturally takes everything that Freud theorized as fact, and gives us a few very truncated leaps of intuition that gets Ol’ Sigmund to his various theories. Like I said, this is certainly a fictionalized account of how Freud developed these various ideas and put them forth. I don’t know enough of Freud’s actual history to know how much of this is accurate and how much of it is merely cinematic license. Frankly, I kind of don’t care.

This isn’t to say that Freud is a bad film; it’s not. It’s just not as interesting as I hoped it would be. It goes along at a pretty good clip and doesn’t specifically feel like its 130-minute-plus length. But it does feel like it chases its tail quite a bit. There’s a great deal of Freud theorizing various things and not really getting to where we more or less know he’s going to get to. And this is even with the truncated versions of some things. In one scene where he analyzes Cecily, she drops a couple of classic Freudian slips…and suddenly he’s got a completely new insight that seems to be a complete hypothesis formed on the spot.

It’s also worth noting that Susan Kohner is stuck here in the pretty thankless role as Freud’s wife Martha. She seems to exist mostly in the background except for those moments when Freud wants to condescend to her trying to read his papers and her blanching at the thought of him learning about the sexual desires of his patients. In an equally thankless role is Larry Parks as Freud’s colleague Joseph Breuer. Breuer seems to be in the film to give Freud patients that develop his theories and to otherwise doubt everything that Freud comes up with.

I can’t imagine wanting to experience Freud a second time. It’s not a bad film and it’s one that demonstrates that Clift (who was conflicted in ways similar yet very different from Freud) had skills under those movie star looks. This film was made after Clift’s accident and after his face was reconstructed. He didn’t have the looks to fall back on, and he still manages to be magnetic on the screen. It’s worth seeing for him; it’s just not worth seeing twice.

Why to watch Freud: It’s as prurient as you expect it to be.
Why not to watch: It’s about as goofy as you’d expect Freudian material to be.