This is the third in a series of twelve movies selected by Chip Lary at Tips from Chip. 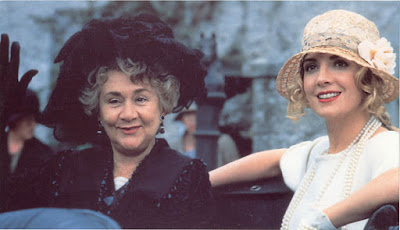 With Widows’ Peak, Chip has offered me something of a poser. I like to focus on narrative with these reviews. Widows’ Peak has a clear narrative; in fact, it could be argued that it’s close to all story. However, discussing too much of that narrative spoils the entire film. This starts as a bit of social dealing, moves into petty rivalry, and quickly devolves into full blown mystery.

So let’s start with the basics. In the 1920s, the Irish town of Kilshannon gets into a bit of a tizzy thanks to the arrival of Edwina Broome (Natasha Richardson), a young woman widowed in the war. The only place for her in Kilshannon is what the locals refer to as Widows’ Peak, an area of the town on which virtually all of the residents are widows. Edwina does cause a stir for several reasons. First, she is British, and not all of Ireland views the Brits very favorably. Second, she’s still quite young, and unlike the other women of the Peak, she doesn’t dress in mourning black. Third, because she was raised as the daughter of an ambassador, she speaks with an American accent.

Edwina Broome catches the eye of three people in particular. The first is Mrs. Doyle-Counihan (the irrepressible Joan Plowright), the leading figure of the Peak. The second is her son, Godfrey (Adrian Dunbar), who is immediately attracted to the young widow. Third, and perhaps most critically, is Miss Katherine O’Hare (Mia Farrow). Katherine is an anomaly on the Peak. Unlike the other women, she is both not a widow and is also dirt-poor. In fact, not only is she not a widow, but she has never married, although she does spend a good amount of time in the company of Con Clancy (Jim Broadbent), Kilshannon’s resident dentist.

Each of these three play an important role in the life of Edwina Broome. Mrs. Doyle-Counihan is the equivalent of social capital, since what she says goes in the Widows’ Peak community. Godfrey is an obvious romantic match, and this is something more than a little pressed forward by Mrs. Doyle-Counihan. But Katherine is the fly in the ointment. She and Edwina take an immediate, almost pathological dislike to each other. And when things start happening to Edwina and Katherine both, they immediately accuse the other of being the one at fault. Katherine goes so far as to claim that Edwina is attempting to murder her.

The entire film functions on the idea of secrets, and specifically the secrets of both Edwina Broome and Katherine O’Hare. Edwina lives her life as an open book, specifically hiring the town gossip, Maddie O’Hara (Rynagh O’Grady) as her maid and leaving all of her cabinets, cupboards, and desk drawers unlocked to give Maddie ample opportunity to pry. But there’s also the strange social position of Katherine—a non-widow and virtually penniless—that needs some explaining as well. There is, of course, a great deal more, but much of the fun of Widows’ Peak comes from the discovery of the various plot points without being alerted to them. I won’t spoil them for anyone. I will only say that I came to about 80% of the correct conclusion on how the film wraps up a good 45 minutes before we get there.

Sadly, that’s a little bit of a knock against the film, but it’s not so much the film’s fault as a function of my paying careful attention. Someone who doesn’t get to the end (or in my case, most of the end) before the film does will find it quite satisfying. There are a number of really fun twists and turns here, and in particular, as the film moves along we slowly learn about those secrets mentioned earlier. How those secrets are revealed is all part of the fun.

Natasha Richardson is very good here as a sultry woman of mystery and Mia Farrow plays about half the film as a social mouse and the other half as a social mouse with a great reserve of inner strength. These are excellent roles for the both of them, and they handle them well. For me, though, the real gem is Joan Plowright, who manages to be feisty, funny, and still completely aware of all of the social angles of every event that happens around her. She’s a treasure, and beyond the plot, is the main reason to spend time with Widows’ Peak.

The problems I have here are ones that, unfortunately, I can’t really talk about without spoiling a significant part of the film, at least in one case. The main issue is that there is an aspect of the plot that I had trouble buying, and that problem is precisely what led me to guessing most of the conclusion correctly. It’s also a bit of a slow burn in terms of getting started. It’s the rivalry between Edwina and Katherine that is central to the film, and we’re a good portion of the way into it before that blooms into anything significant. Widows’ Peak would benefit from a faster start, or a steeper dive into the story.

But that said, it’s good fun. I enjoyed it, even if it took me about half an hour to realize that I was genuinely enjoying it. We’ll call this 3 for 3.

Why to watch Widows’ Peak: A very entertaining and convoluted story.
Why not to watch: A major plot point is a little tough to buy.