Film: Hold Back the Dawn
Format: Internet video on laptop. 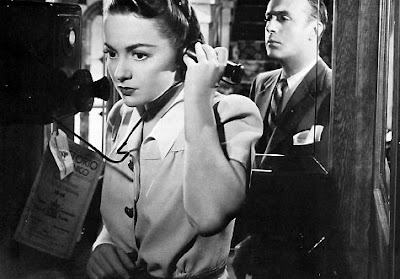 Keepvid is a nice little internet site that allows one to download videos, which is something I’ve used any number of times to safeguard a rarity that has appeared on YouTube. The downside of Keepvid is that it doesn’t work with Dailymotion, which means that anything I find there is at risk for vanishing suddenly, leaving me with no good option. Because of this, I watched Hold Back the Dawn today in fear that it might suddenly turn into a pumpkin.

This starts with our romantic hero and narrator Georges Iscovescu (Charles Boyer) more or less breaking onto a Paramount Studios set so that he can speak to a film director named Dwight Saxon (played by this film’s director Mitchell Leisen, and filming a scene with Victoria Lake) who he once met. He offers Saxon a story for $500 and his desperation more than anything gets Saxon to listen. Thus begins a tale of love and melodrama starting in a place that is certainly racier than would normally be the case for a film from 1941.

The quick and dirty is that Georges Iscovescu lists his trade as a dancer, but in reality he’s more of a gigolo/con artist bilking rich women out of their money to enhance his lifestyle. It’s implied that Georges had to leave Europe because of the war, but that getting into the U.S. wasn’t that easy, particularly for a Romanian since Romania was allied with the Axis. Georges ends up in a border town in Mexico, hoping to hang out until his visa clears his passage, but the quota system and the very low quota for Romanians means that his wait could be up to eight years. Six months of living in a hotel find him broke and desperate.

This is when, by chance, he encounters Anita Dixon (Paulette Goddard), his former dance partner and former partner in crime. While Georges fleeced the women, she handled the men. She’s in the Mexican town on a visit because she managed her way into the country by marrying someone and then quickly divorcing him once she made it across the border. She suggests he do the same. He considers the idea carefully and decides it’s worth a shot, setting his sights on Emily Brown (Olivia de Havilland) a school teacher on a field trip, inexplicably on the Fourth of July and in Mexico. Georges turns on the charm and takes advantage of her car trouble and wins her in a night. A quickie marriage in the morning and all he has to do is wait for four weeks until his papers clear and over the border he goes. The plan is for a divorce as quick as the wedding, meeting back up with Anita, and heading off to New York.

There are two wrinkles in this plan. The first is in the person of Inspector Hammock (Walter Abel), an immigration official who lets it casually drop that immigration is starting to crack down on these marriages of convenience for American passage. The second is that Georges realizes just how innocent and gullible Emily is and he starts to feel bad for her and for the first time in his life, guilty for taking advantage of a woman for getting what he wants.

So there’s a lot more, of course. There’s a car accident and more guilt and Georges potentially risking his ability to ever legally emigrate for the chance to tell his story. It’s a film that really should be scored with weepy strings in a lot of places except that it somehow makes it all work. In truth, the reasons it works aren’t that unknown. They’re pretty basic stuff—good screenwriting, strong characters, and good performances.

I have a tendency to like Billy Wilder’s screen plays, and Hold Back the Dawn is a good one despite its inherent melodrama. Much of this comes through in little side scenes that more fully develop characters that would be much more one-dimensional in a typical film. A good case in point is Hammock. In many a film, Hammock would be cast as the bad guy, coming across as an asshole preventing Georges from entering the country (or, possibly, as kind of an asshole doing his job to protect these United States). We get a few scenes here that show him to be a pretty stand-up guy, though. One in particular concerns a German couple who are desperate to enter the country, especially because the wife is pregnant. Hammock is forced to tell them that they are being denied entry, not because of her, but because her husband is tubercular. He’s genuinely concerned for them to the point that he can’t give the bad news to her husband, and he seems concerned about their welfare and confident that once he is healthy, they will be granted entry into the country.

It also works because it takes itself seriously. This could have very easily been a screwball comedy, but Hold Back the Dawn doesn’t go there. It drops the comedy part of romantic comedy and instead plays like an actual romance and aims for real depth of feeling and actual growth in the character of Georges.

Of course, it’s well cast as well. Boyer is serviceable in his role, but in truth, that’s about what I think of Charles Boyer in most roles. He’s a non-comedic Maurice Chevalier and I can generally take him or leave him. I like Paulette Goddard, though, and like the way she plays a femme fatale in a non-noir here. Olivia de Havilland takes the film, though. For someone who could be so glamorous, she always did well in these dressed-down roles (The Heiress and The Snake Pit serving as additional examples). Here she really is sort of heartbreaking.

Hold Back the Dawn is perhaps too earnest and too melodramatic to be taken too seriously, but it’s not bad and worth tracking down.

Why to watch Hold Back the Dawn: A genuine romance penned in part by Billy Wilder, and it’s the film that made Wilder start directing his own screenplays.
Why not to watch: You can cut the melodrama with a knife if you want to.