Off Script: Night of the Demon 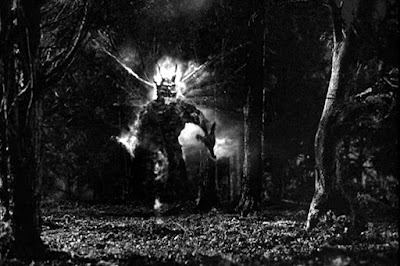 I like a good horror movie, and one of the real joys of the genre is watching one of the more formative films. The 1950s were a great time for science fiction and horror. Directors were still trying to figure out what really made people scared and what was really effective in terms of shocking and surprising the audience. Jacques Tourneur was a master of creating mood. With Night of the Demon (also released under the name Curse of the Demon), Tourneur breaks some basic rules of horror, and does it to solid effect.

That cardinal rule is to not reveal the monster at the start of the film. We open with a panicked scientist named Harrington (Maurice Denham) arriving at the home of Doctor Julian Karswell (Niall MacGinnis). He begs Karswell to call something off. Karswell agrees, but seems unable to do anything about this when Harrington mentions that a parchment containing runes has been burned. Harrington leaves, but soon enough he is confronted by that thing that he asked to be called off: a demon, and we see it in all its glory. Harrington, naturally, doesn’t survive the encounter.

The scene shifts to the person of John Holden (Dana Andrews), who is arriving in England for a conference on the supernatural. Holden, like any good scientist, is a skeptic, and has been working with Harrington. His flight is a rough one thanks to the woman sitting behind him. Upon arrival he learns of Harrington’s death and decides to continue Harrington’s investigation. What investigation? Harrington and Holden are investigating a demonic cult led by…Doctor Julian Karswell. And, because there aren’t really any coincidences in movies, the woman on the plane behind Holden is Joanna Harrington (Peggy Cummins), the niece of the dead researcher.

So, we’ve already seen the demon, so much of what follows will be about Holden’s skepticism being constantly challenged. At a meeting with Karswell, Holden is told that he will die at 10:00pm in three days, the same sort of prediction he made to Harrington. And more and more things seem to happen that lead Joanna Harrington to believe that Holden really is in danger while he is convinced that all of this is a sham. But, of course, it isn’t a sham. Karswell really does have the ability to conjure up dark powers and demons, but is constantly in fear for his own life in doing so. In fact, his lavish lifestyle is paid for by people he has essentially threatened with demonic death, and evidently the regular deaths of people are required to keep the demon at bay.

Tourneur’s films in this genre have both a significant upside and a major downside. The upside—and it is a major one—is that few directors of the time (or, really, ever) were able to create the sort of atmosphere that Tourneur could. He accomplishes a great deal with shadows and implication. Night of the Demon is the sort of film that Val Lewton would have loved to produce had he still been alive. There are some great sequences of Holden being pursued by a ball of fog and smoking footprints in a forest, for instance, that still works very well.

But this brings up the biggest problem with the films of Jacques Tourneur: they aren’t very scary for a modern audience. It’s far more creepy than it is flat-out scary. In fact, showing the demon here was something of a surprise for Tourneur, who seemed to be much more comfortable keeping things in the shadows and doing things by implication rather than going for the outright scare. We only see the demon twice—once at the beginning of the film and again at the end, and the effect is pretty good. But for a modern audience, the demon that we’re shown just doesn’t really come across as that scary. It’s not comic, but it’s definitely a special effect.

But really, that’s me just looking for something to complain about. Night of the Demon is a solid horror/thriller film that demonstrates that Jacques Tourneur was the master of his craft. The film works on a psychological level. The fact is that it avoids going for the cheap scare because it tries to go for something deeper. The goal here isn’t to scare the audience but to upset that audience on a more existential level. It tries to root around in the darker recesses of the human subconscious, and it manages to dig up a few things.

I enjoy the hell out of this. It might come across as goofy initially, but it turns out to be a solid film that is worth the time to track down. If you like classic horror, you’ll want to find this.

Why to watch Night of the Demon: Old school horror.
Why not to watch: Like most Tourneur films, it’s more about the atmosphere than the actual scares.

Email ThisBlogThis!Share to TwitterShare to FacebookShare to Pinterest
Labels: Curse of the Demon, horror, Jacques Tourneur, Night of the Demon, thriller