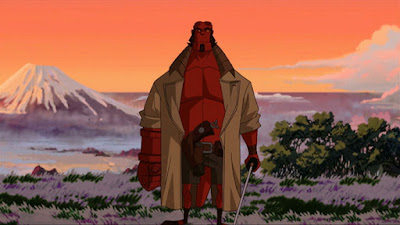 It seems that 2006 was another one of those down years for animated films. Of those that weren’t nominated, I’ve seen Flushed Away and Over the Hedge, both of which I like more than at least one of the nominees. On a pure metric of what really deserves a chance for an Oscar, though, it’s a pretty slim field. Flushed Away was funny, but not great and hardly memorable. Over the Hedge tried too hard to be entertaining for the parents and failed. I haven’t seen A Scanner Darkly or Paprika, so I can’t comment. Hellboy: Sword of Storms may well be the best animated film of the year, but it’s a short and was released straight-to-DVD, so therefore wasn’t eligible.

3: I genuinely disliked Happy Feet. I didn’t like it the first time I saw it and I didn’t like it on a rewatch. The animation might be the only bright spot here. The story is laden with holes, the singing isn’t that good, and I don’t like a single one of the characters. Over and over, it seems like the wrong choices were made at every turn. That this was made by George Miller is absolutely staggering to me—the man has the ability to tell a great story and he gives us one about dancing penguins doing bad Elvis/Marilyn Monroe impersonations. It’s not the worst animated movie I’ve ever seen, but I think it’s the worst winner of this award.

2: I’ve seen 14 of Pixar’s 16 releases, and I’m not sure Cars makes the top 10. It might, but if it does, it sneaks in at the 10th spot. I won’t say that it’s a bad movie because it’s not a bad movie. It’s certainly not a very good one, though. It might be a new story for the kids, but for the adults, it follows a very specific path covered in a lot of earlier movies. Essentially, it’s Doc Hollywood with Hooker headers. The animation is fine and the voice work is solid, but the story leaves a lot to be desired. It’s not a film I’ve thought much about watching again, and for Pixar, that’s a pretty sad state.

1: While the art of Cars is probably its best aspect, it’s the part of Monster House that I like the least. That said, I like just about everything else about Monster House, which is why it ends up in the top spot for me here. For a film that I find surprisingly ugly, the animation is really good. More importantly, it’s a good story that doesn’t pander to kids (it’s pretty scary in places) and it genuinely gets the kids right. With prettier art, this would rank as one of the better Best Animated Feature nominees released. As it is, though, it’s the best animated theatrical release of its year and that should have been recognized.