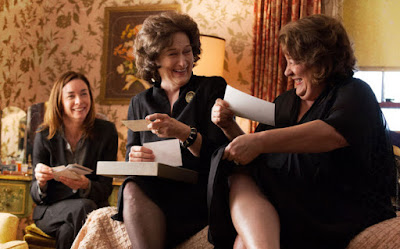 I think, if you ask just about anyone, he or she will complain a little (or a lot) about his or her family. It’s a natural thing to do. When you run across a film like August: Osage County, you have one of two reactions. It’s entirely possible that you see a film like this and sympathize with it completely; it ends up fitting you like an environment. The other possibility, and the reaction that I thankfully had to it, is a realization that the issues of your own family are almost nothing compared with what they could be. The Weston family is dysfunctional just to the edge of believability. It’s worth noting that one of the more interesting dysfunctional families on television in the last decade or so (from Burn Notice) was surnamed “Westen.” That seems like a bizarre trend.

Anyway, August: Osage County is the king-hell story of family dysfunction. There isn’t a moment of this that isn’t about psychological suffered by one person in the extended Weston family at the hands of another member of the extended Weston family. It begins with family patriarch Beverly Weston (Sam Shepard) hiring a local named Johnna (Misty Upham) as a cook and as someone to look after his wife, Violet (Meryl Streep). Violet has been diagnosed with cancer and is a brutal, acerbic woman who, thanks to her diagnosis, is hooked on a variety of medications (and not for the first time). Beverly, himself a once-acclaimed poet, is a drunk and is unabashed about it.

Shortly after hiring Johnna, Beverly walks out of the house and vanishes. Panicked, Violet contacts her daughters. Middle daughter Ivy (Julianne Nicholson) still lives in the middle of nowhere, Oklahoma, and is thus the first to arrive. Oldest daughter Barbara (Julia Roberts) arrives with her estranged husband Bill (Ewan McGregor) and their daughter Jean (Abigail Breslin). Youngest daughter Karen (Juliette Lewis) shows up with Steve (Dermot Mulroney), the latest in what is evidently a series of boyfriends. Finally Violet’s sister Mattie Fae (Margo Martindale), her husband Charlie (Chris Cooper), and eventually their son “Little” Charles (Benedict Cumberbatch) arrive, since Beverly’s disappearance turns out to be permanent; he evidently drowned (possibly intentionally) falling off his boat.

And what follows, after this initial 30-minute set-up is about 90 minutes of family dysfunction, pain, misery, screaming, rare bonding moments, and emotional trauma. I kind of knew this going in, but I didn’t expect this level of it.

I don’t toss the phrase “Oscar bait” around that much on this blog because I think it’s a dismissive term. It’s the same reason that, except in cases like this where I am saying it only for demonstration purposes, I don’t use the term “chick flick.” In this case, August: Osage County is straight-up Oscar bait. This is a truly stellar cast, the sort of a film cast that most directors would willingly shorten their lives to have in a film, and the drama requires the sort of big, emotional performances of which Oscar dreams are made. Evidently, it worked; both Meryl Streep and Julia Roberts were nominated.

What is at issue for me, though, is that there’s not much else here. The Weston family is almost comically dysfunctional. These are mean, hateful people who seem frequently to be mean for no other reason than it suits them in the moment. These are people who, adjust a common idiom, wouldn’t cross the street to piss on a family member if said family member was on fire. Additionally, though, these are people who would cross the street to piss on another family member for the hell of it. They revel in each other’s misery and pain. It’s as if the story is attempting to be a sort of psychotic catharsis.

Because so many of these roles require Acting!, it’s the more subdued performances that work for me. Chris Cooper is always good, and he’s great in this. Benedict Cumberbatch is endearingly pathetic as the browbeaten son of another vicious and cruel mother. The real star for me is Julianne Nicholson, who I think stands out as the film’s quiet and relatively sane emotional center. The rest of these performances and characters are so taken with themselves that there’s simply no room to breathe.

August: Osage County is a performance film. Director John Wells seems to have done little more than set up his camera about 8 feet away from everyone and film the scenes from the adapted play. This is an adaptation from the stage, and it feels like it, and Wells more or less gets out of the way of a cast with about 50 Oscar nominations between them and lets them do what they do.

I can’t imagine wanting to spend time with this a second time. August: Osage County takes itself so seriously, but is so dysfunctional that it borders on farce. Then again, while everyone in my family is a little goofy sometimes, we don’t have this level of chemical imbalance, maliciousness, and masochism. If that means I can’t understand the film completely or really see its genius…I think I’m thankful.

Why to watch August Osage County: The stellar cast.
Why not to watch: Not one piece of scenery goes unchewed, and this overshadows a few truly solid performances.