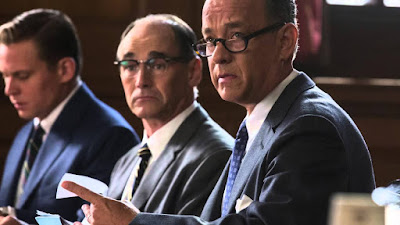 The problem with rarely going to the theater and simultaneously keeping a blog about Oscar films is that every year when the Oscar nominations are announced, I find myself suddenly with a series of films to watch that are often not immediately available to me. So, as the films are released, it’s a slow game of catch up. Bridge of Spies is one I was interested in, so when it became available, I rolled it to the top of the queue and crossed my fingers that I’d get it quickly. And so I did.

I like spy movies. I’m not entirely sure what I find interesting about them or why I like them as much as I do. Many spy films, of course, are action movies, so there’s that attraction. Bridge of Spies is not an action movie. There are a few scenes in which shots are fired and there’s a pretty cool plane crash sequence, but this is a movie about courtrooms and negotiations and backroom deals, with many of those deals having massive implications on a geopolitical scale.

The film opens by introducing us to Rudolf Abel (Mark Rylance, who just won an Oscar for this role). Abel is an older man who lives by himself and enjoys painting. It also happens that Abel is a Soviet spy in the middle of the Cold War. A few minutes after the film begins, Rudolf Abel is captured and, as per the American legal system, is held for trial. But who will defend a Russian spy in court? It turns out that in this case, the case is handed to James B. Donovan (Tom Hanks). Donovan is an experienced lawyer, but is much more at home in the insurance field. However, he’s worked with the U.S. government before, having spent time as a prosecutor during the Nuremburg trials.

Donovan’s mission is made immediately clear to him. The goal is to give Abel a fair trial, but it’s clear that the verdict will be that he is guilty. Donovan’s job is to mount a capable and competent defense, even if the conclusion is foregone. He’ll lose the case and will likely be reviled by a commie-hating American public for defending a known Soviet spy, but American due process will be served. Donovan takes the case seriously and mounts the best defense he can, but no one is surprised when Abel is convicted. Donovan successfully argues that he not be executed. His background in insurance causes him to think that an insurance policy might be worthwhile; after all a captured American will certainly happen at some point, and Abel would then be fair game for a trade.

At the same time this is happening (at least in the world of the film), the U.S. is beginning its U2 spy plane project, and a group of pilots is brought into the fold. Among them is Francis Gary Powers (Austin Stowell). Anyone familiar with his or her history will know that Powers was shot down over Soviet airspace in said spy plane and was detained for questioning despite Powers’s explicit orders to destroy the plane and kill himself if his plane was shot down.

And, if this isn’t complicated enough, the Berlin Wall is going up at the same time, and a young American graduate student named Frederic Pryor (Will Rogers) is caught on the wrong side of the wall and is soon detained for questioning. Pryor, at least in the film world (and in the real world as far as I know) was completely innocent of everything but being in the wrong place at the wrong time. Naturally, thanks to his involvement with Abel’s defense, Donovan is brought in to negotiate the release of Powers, warned to avoid being duped into accepting the release of Pryor instead. And, naturally again, Donovan works to release both men in a 2-for-1 exchange.

Bridge of Spies plays a little fast and loose with the chronology. In reality, Rudolf Abel was held in an American prison for about four years before Gary Powers was shot down. The film doesn’t explicitly state that the events depicted were virtually simultaneous, but it does imply this pretty strongly. In the grand scheme, though, the film is pretty faithful to the real narrative of the Abel/Powers exchange.

This is another of those films in which an audience member with a decent knowledge of the history will already know the outcome of the basic story even if all of the details aren’t specifically known. That doesn’t mean that there isn’t a good deal of tension built into the narrative. Spielberg, when he has good material, is capable of telling a solid story, and the drama is naturally built into this one.

It’s worth noting that I often have issues with Spielberg’s films. He has a tendency to hit hard on the emotional moments and not let up. It almost seems like a compulsion for the man; I don’t know if he can avoid it completely. Fortunately, he only dips into that well a couple of times during the running time. In particular, at one point we see a group of people—they look like teens—shot trying to cross the wall from East to West Berlin while Donovan rides by on the train. Later, near the end of the film while he is home in New York, Donovan is again riding the train and sees a group of American kids climbing a fence in a back yard the same way, and of course being free to do so. It actually works as a callback, and from another director, I’d applaud it. With Spielberg, though, there’s that moment of thinking that he’s trying to mash that emotional button.

It’s a hell of a good film, though. It works all the way through. I like the performances top to bottom. Tom Hanks is as good as he ever is, and Mark Rylance’s performance is worthy of the acclaim it received. I think it’s also worth mentioning Scott Shepherd as American agent Hoffman. It’s a solid performance in a film that is pretty much filled with them.

It’s worth seeing if you haven’t seen it. There’s good tension, a solid plot, and it has Spielberg’s trademark stamps of Spielberg at his best.

Why to watch Bridge of Spies: Spy stuff, and it’s real-world spy stuff.
Why not to watch: Like most historical films, there’s some inaccuracy at play in service of the drama.