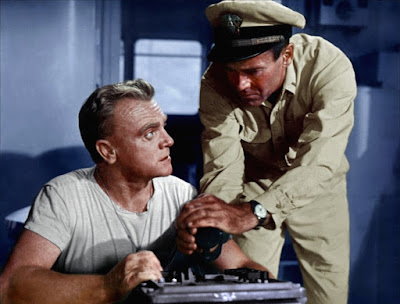 Plans change. Some time ago, I recorded the 1935 version of A Midsummer Night’s Dream on the DVR. TCM changed its schedule, though, and instead of getting that, I got Mister Roberts. Ah well, it’s Cagney, and it’s Cagney in one of his more impressive roles, so I figured I’d watch it anyway. I’ve seen Mister Roberts before and it was film I was looking forward to seeing again. I like the cast, and while I don’t love the ending, I love most of the story.

I do wonder about how the filmmakers managed to get the U.S. Navy’s cooperation for producing this film. It doesn’t really paint the nicest picture of the Navy, or at least this one part of it. The movie takes place in the waning days of World War II in the Pacific. However, this doesn’t really take place during the shooting war. The plot takes place mainly onboard the USS Reluctant, a cargo ship that has spent the war resupplying combat ships. On the surface, it’s a successful ship and was even awarded a palm tree for efficiency.

In reality, though, Reluctant is a ship in trouble. The men suffer under the rule of Captain Morton (James Cagney), a man who belongs in the august ship captain company of men like Queeg, Bligh, and Ahab. The men, because of Morton’s martinet-like behavior, haven’t had liberty in ages. The only person who ever stands up to Morton is Lieutenant Doug Roberts (Henry Fonda), who writes a weekly letter asking for a transfer to get into the actual war.

There’s not a single shot fired on screen in Mister Roberts, but don’t kid yourself; this is definitely a war movie. It’s just that the war is between Roberts and Morton, not the US and Japan. Roberts does everything he can for the benefit of the crew and takes as much of the blame as he can when ridiculous orders are disobeyed or ridiculous duties are shirked. And, ultimately, Roberts pays a soul crushing price for being the buffer between the captain and the rest of the crew.

Mister Roberts trades entirely on four performances that make the film what it is. The main two are, of course, Henry Fonda and James Cagney. I said a couple of weeks ago that I thought Cagney was nominated for the wrong Oscar in 1955 and for the wrong role. Cagney’s Morton is the epitome of Hannah Arendt’s quote about the banality of evil. He is petty and vindictive, a prime example of power corrupting and not many people could have played him with the conviction of Cagney. I said at the same time that Henry Fonda was the biggest miss from 1955’s Best Actor lineup, and I stand by that comment.

Fonda and Cagney are ably assisted by Jack Lemmon as Ensign Frank Thurlowe Pulver. Pulver is terrified of the captain and spends so much time in his bunk that Morton isn’t even aware of him as a member of his crew. He has dozens of plans for playing tricks on Morton that he is too terrified to actually attempt. Lemmon won the Supporting Actor Oscar for this role, and it’s at the very least a nomination I like. Lemmon is immediately likable on screen, and as Pulver, he gets most of the comedic lines and moments. This is more or less the beginning of who Jack Lemmon would become at this point in his career, and it’s a thing of beauty.

Mister Roberts is also the final movie in the career of the great William Powell, who retired after this. I always tend to like Powell. He had great comic timing and screen presence, and here, a good 20 years after the classic Thin Man films, Powell has managed to add something of an elder statesmanship to his screen presence. As the ship’s doctor, Powell is often the voice of reason, and is really the only person Roberts can relate to on a genuine level.

The film walks a very fine line between comedy and drama. Essentially, it is a drama in terms of the big story, but comedic in many of the moments throughout the film. The drama comes entirely from the situation of Morton’s treatment of his crew, and even the comedy plays directly into it. Finally given liberty at the cost of Roberts no longer writing letters asking for a transfer, the men manage to embarrass the ship on shore. While their antics—breaking up an Army dinner, stealing the local admiral’s pet goat—are comedic, there is a sense that for everything the men do, Roberts will eventually be forced to pay the price.

If there’s anything I don’t like, it’s the few minutes before the ending. It feels a little cheap and too planned. My wife, who watched this with me, isn’t the sort who normally pegs the ending of a film of this sort. But when that culminating moment happened, she said something to the effect of how it wasn’t a surprise. I agree. It’s too staged, and while the intent was to put home a real message at the end of the film, it comes off as a little cheap.

Still, I like Mister Roberts pretty well. It’s a top-notch acting film, and seeing four screen legends in the same place at the same time is worth it.

Why to watch Mister Roberts: It’s the culmination of Henry Fonda’s nice guy persona and the birth of who Jack Lemmon would become.
Why not to watch: The ending is a pisser.