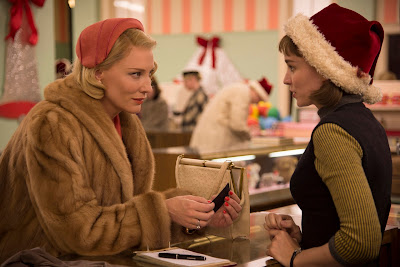 Every year when the Oscar nominations are released, I find myself with a sudden influx of new films on the list to get through. I do my best initially to get through as many as I can, but by the end of the year, I find that I’m tired of hammering on the most recent year of film. This is why I still have films to watch from the past few years. It also means that I’m still in that phase of catch-up mode for 2015, which is why I moved Carol to the top of the queue recently. Since Best Actress performances are still where I’m the most lacking (although I have caught up tremendously on them and they lag behind Best Actor by about half a dozen now), watching the one that is both currently available and that I haven’t seen seemed like a good fit.

What I didn’t know going in was that Carol was directed by Todd Haynes. I tend to like the films of Haynes, so it made me far more interested in this from the outset. That it touches on themes similar to Far from Heaven, which I think may be his most accessible film and certainly one of his best is an additional benefit. Far from Heaven focuses mainly on interracial romance set in the 1950s but touches on a homosexual relationship as well. Carol ditches that main point and concentrates instead on a lesbian romance set in the same time period.

Wealthy housewife Carol Aird (Cate Blanchett) goes Christmas shopping for her young daughter and meets Therese Belivet (Rooney Mara), a shopgirl with aspirations of being a photographer. When Carol leaves her gloves behind at the counter, Therese uses the sales receipt to track down her address and mail her the gloves. In appreciation, Carol takes Therese out to lunch, and the two are attracted to each other despite (or perhaps because of) their difference in age and background. It’s soon evident that this may be Therese’s first trip on this particular carousel, but it is not Carol’s. She is going through a divorce with her husband Harge (Kyle Chandler) in part because of an affair she had with her friend Abby (Sarah Paulson).

Threatened by the potential loss of custody of her child, Carol drives west from New York to get away and Therese accompanies her. Eventually, past Chicago and just into Iowa, the two consummate their relationship only to discover that they have been found out by a private detective (Cory Michael Smith) hired by Harge to gain leverage for a morals charge against his wife in his effort to secure custody of his and Carol’s daughter.

Carol is entirely a character-based drama. The film itself is very slow moving, which seems to be something that Haynes does often. It would be easy to be put off by the pace of the film, but I think it works specifically because of the time it is set in. A film based on a lesbian romance set today is much more likely to be akin to Blue is the Warmest Color because the sex is far less taboo today. For a film set in the 1950s, the steps that get there are slower, smaller, and more numerous because they have to be. At each step in the relationship, the characters need to know that the other person is at the same mental and emotional place. A misreading of signals is not just a failed relationship but a potential scandal and something that could easily ruin a life or two.

Because of this, Carol moves fitfully. Carol and Therese connect, disengage, reconnecdt, disengage, and reconnect again throughout the running time. Obstacles placed in their path become things that aren’t merely spats or temporary fights, but serious obstacles because everything is tentative for them at all times. I think this works—the film is more or less paced in the same way the relationship is forced to be paced.

Carol was nominated for a half dozen Oscars, and I think many of them were warranted. It’s definitely a situation of politics in the sense that Cate Blanchett was nominated for Best Actress and Rooney Mara for Best Supporting Actress, since it could be argued that both are main characters and since both have a roughly equal time on screen. In fact, while the film is named after Blanchett’s character, Mara’s character goes through at least as much of a character arc. I’m not entirely sold that the film deserved a nomination for music, since I found the music completely unmemorable, save for a basic theme that popped up a few times and is mostly memorable because it plays over the last few moments.

What does work, though, is how much of the relationship between the two characters plays out nonverbally. Again, it plays to the nature of the relationship and how much needs to happen without strictly being spoken of where it might be overheard. The fact that actually voicing the details of their relationship when they believe themselves to be alone comes at such a terrible price merely reinforces that idea.

Carol isn’t one I’ll watch frequently, and I won’t rank it as highly as I do Haynes’s Far from Heaven or Safe. But I did like it, and think that the idea of a true romance (and this is a real romance) coming in a variety of shapes and forms bodes well for our cinematic future.

Why to watch Carol: Because Todd Haynes films should be watched in general.
Why not to watch: It’s a little slow to get started.