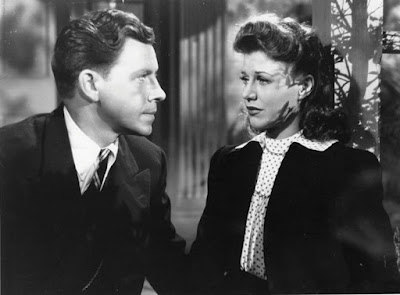 Once upon a time, Burgess Meredith was young. For those of us who remember him as Mick from the Rocky films, that seems difficult to believe, but it’s true. There was even a time when he could pull off being a romantic lead. Evidence is Tom, Dick and Harry, a little slip of a comedic romance released about half a year before the U.S. entered World War II. Tom, Dick and Harry isn’t the sort of film to set the world on fire because there’s not really a lot to it. It’s an odd bit of wish fulfillment that seems more or less designed to keep people happy as the war loomed.

I’ll sum this up nice and quickly. Janie (Ginger Rogers) works as a telephone operator. She’s dating Tom (George Murphy), a dull but solid and ambitious car salesman. After a night at the movies and a run-in with an obnoxious ice cream salesman (Phil Silvers), Tom asks Janie to marry him. After some fussing, she agrees, and dreams that night of what it would be like to be married to a guy who is married to his job.

The next day at work she tells her friend, but what she really wants is to marry a rich guy. Her dream man is Richard Hamilton (Alan Marshal), whose calls she connects every day at her job. When the two leave work that day, she sees a young attractive man pull up in front of her in a huge, expensive car. On a whim, she jumps in, assuming it’s Hamilton. The driver takes her home and, despite her being engaged to Tom, she accepts a date that evening.

Of course, this isn’t Dick Hamilton. It’s Harry (Burgess Meredith), a mechanic who was delivering Dick Hamilton’s car to him. He and Janie go out anyway, an while Harry is a bit of a Bohemian and a philosopher uninterested in money, there is a mutual attraction between the two, and unlike her experience with Tom, when she kisses Harry, she hears bells. Harry proposes to her as well, and she accepts again, and again dreams about what the marriage would be like, although this is a much darker, more poverty-filled dream.

The next day, Harry goes to check out Tom and manages to go on a test drive to pick up Janie, which naturally creates some tension. Tom forces the two of them out of the car a good distance from town. And who should pull up but Dick Hamilton, who knows Harry and gives the two a ride back to Janie’s house. What follows is yet another dream. The next day, Janie manages to disconnect his phone call, and also manages to finagle a date with Dick Hamilton for herself, a date that involves him flying her to Chicago in his private plane and getting her hammered on champagne. And, of course, we get a third proposal. That Janie; she’s irresistible.

As might be expected, the last 20 minutes or so are Janie figuring out what to do. Her options are the solid, dependable and dull Tom; the quirky and exciting but unambitious Harry; and the wealthy Dick who she doesn’t know at all. And, of course, there’s going to be fourth dream sequence involving all three of the conveniently named suitors.

Like I said at the top, Tom, Dick and Harry is fluff. It’s harmless and silly and entirely entertaining even if there really isn’t much there. It’s the sort of film that I’d find difficult to believe was anyone’s favorite movie, but it’s also the sort of film that I think would be impossible for anyone who is a fan of films of this era to entirely dislike. It does feel like a real step down for Ginger Rogers, though. She was making this film when she won the Oscar for Kitty Foyle. It’s hard not to like Ginger Rogers, even in something that makes her such a dip and in something so completely lightweight.

And that’s really all there is to this. Tom, Dick and Harry is entirely inoffensive and silly, and for what it is, it’s pretty entertaining. It’s not going to change anyone’s life and the dream sequences are inventive and fun (I particularly enjoy seeing George Murphy and Burgess Meredith playing infant versions of themselves). But there’s also probably a reason that this isn’t the sort of film that is regularly pulled out as being a classic. There’s just not enough there.

Why to watch Tom, Dick and Harry: Ginger Rogers and Burgess Meredith a romantic couple? Yeah, you’ll believe it, too.
Why not to watch: Even if it’s entertaining fluff, it’s still just fluff.