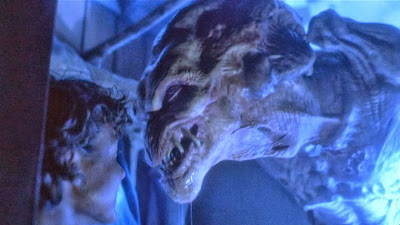 I remember watching Pumpkinhead in college. Without even trying, my roommates and I somehow got cable including HBO, possibly from our neighbors upstairs, and one night, Pumpkinhead was on. I remember this specifically because one of my roommates, a big meathead named Tom, managed to guess wrong on pretty much every aspect of the film despite this being a pretty straightforward, even typical monster movie in a lot of respects. The only really solid thing about the film is Lance Henriksen, the practical effects, and a pretty solid monster.

The film starts in the past in the middle of a swampy nowhere. A young boy is sent to bed and his parents lock up their little cabin. Soon after this, another man arrives and pounds on the door, asking to be let in. The boy’s parents refuse and, as the boy looks out his window, he sees the man picked up and dragged off by a giant spindly monster. This is our first glimpse of the title critter.

Flash forward to the film’s present and that little boy is now a man named Ed Harley (Lance Henriksen), who runs a store in that same middle of nowhere with his young son Billy (Matthew Hurley). We spend a little time with them, and that’s when trouble shows up in the form of a collection of “city folk” who have come to this backwards nowhere to ride around on dirt bikes. Through a combination of Billy’s dog getting loose and reckless driving, Billy is struck by one of the dirt bikes and killed. Specifically, the person who hits Billy is Joel (John D’Aquino), who has not only been drinking, but has been involved in a similar accident recently. He panics and runs, which leaves Ed Harley with a dead son and the memory of the demon he saw as a child.

With his dead son’s body in tow, Ed locates Haggis (Florence Schauffer), an old witch, who tells him that she can only offer him vengeance. That vengeance comes in the form of our titular character, a demon that is called forth to kill those who have wronged the person who calls it. Pumpkinhead starts his killing spree on the six “city folk,” and it’s soon evident that the particular nature of this vengeance means that Ed Harley watches through the creature’s eyes as it kills its victims. He did, after all, want revenge, so the revenge includes a spectator’s spot in seeing that justice enacted.

There wouldn’t be much of a film if it was just Pumpkinhead stalking and killing off half a dozen idiots. No, the minute he figures out exactly what is going on, Ed regrets his decision and does what he can to stop the revenge from taking place, which puts him on Pumpkinhead’s hit list. The concluding act of the film is the title character rather rapidly culling the “city folk” herd, Ed Harley discovering that the more it kills the more the demon looks like him, and, of course, the ultimate conclusion.

I’ll be blunt here. There’s a reason most of the actors in Pumpkinhead haven’t had significant careers. In fact, only Lance Henriksen and Buck Flowers are recognizable actors here. It’s also not very well written. There aren’t a lot of shocks here. While there are a few jump scares, there’s not a great deal of tension in the story. Even for someone who regularly is terrified of even tame horror films, Pumpkinhead isn’t the stuff of nightmares. After all, he only kills anything that has been marked by whomever called it or anyone who gets in his way. So, don’t kill redneck kids in overalls and don’t help people running from demons, and you’re in pretty good shape.

The revenge theme is pretty interesting, though. Plenty of horror movies are based on revenge, but not many of them are as quick to show the darker side of that vengeance. In fact, the idea that Harley regrets what he’s done almost immediately puts this a notch above the typical slasher or monster film in terms of its moral position and theme.

Stan Winston, one of the premier creature creators in film history, directed Pumpkinhead, his first effort in the director chair. This is very much a film that looks like it was created by someone known for creature creation and not direction. Pumpkinhead is a great monster. It’s huge, gangly, and genuinely scary looking, and because of this, it’s the true star of the film. Even Lance Henriksen takes a backseat to the creature.

Pumpkinhead has gained a good deal of cult status, and it does play like a cult film. It’s also surprisingly quick. The revenge part of the film takes a good 40 minutes to get started and the film runs a little less than 90 minutes, so once Pumpkinhead appears after the opening scene, you’re on the downslope toward the ending. It’s a bit unsatisfying in that respect, and in some of the death sequences. A couple are pretty good, but a few of them are throwaways and not the sort of thing that is even worth remembering from a horror film.

If you’re a horror fan, it’s kind of a must-see if only for the monster. If you’re not, you wouldn’t watch this anyway.

Why to watch Pumpkinhead: A treatise on revenge and evil.
Why not to watch: It’s not written very well.