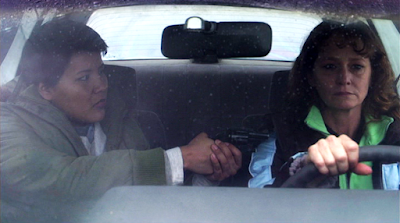 One of the many things I find interesting about movies is those instances in which a movie takes a very different perspective from the norm. I think about a film like Paradise Now, for instance, that attempts to show suicide attacks from the point of view of the attacker. While definitely sympathetic to Palestine, the film isn’t pro-suicide bomber, but an attempt to get inside the mind of someone who would do such a thing. In the case of Frozen River, the question asked is what might drive someone to act in a way completely against what she evidently stands for.

Ray Eddy (Melissa Leo) lives in a trailer with her sons T.J. (Charlie McDermott) and Ricky (James Reilly). Ray is prematurely old—she’s probably in her late 30s or early 40s but looks closer to her mid-50s. She works part-time at a dollar store and does the best she can with a husband who is a chronic gambler and who regularly takes the money she has saved up to buy a double-wide trailer and blows it on lottery tickets and games at the local Mohawk casino. This is where we start the film—with her unable to make the balloon payment for her trailer and being threatened with having her television repossessed by the rental company.

Ray goes looking for her husband and finds his car at the casino. While arguing with the woman at the front desk, she sees someone from the casino go out, get in her husband’s car and drive away. Ray follows and discovers Lila Littlewolf (Misty Upham), who works at the casino and claims that the car was left abandoned with the keys in it. She offers to get a good price for the car if Ray wants to sell it, but that requires taking a drive across the frozen river and into Canada. All of this is more or less a ploy for Ray to do the driving work for Lila’s illegal occupation: bringing in illegals from Canada into the United States. In Lila’s world, there is no real border crossing because the Mohawk land spans across the U.S./Canadian border.

While there are problems with the crossing, Ray discovers that there’s a great deal of money to be made bringing in illegals. To do so, she needs Lila’s contacts. Lila needs Ray as well. She’s already gotten in trouble with the tribal leaders for smuggling people through the reservation. She no longer has a car, and since she’s a known quantity to the local police, she’s also much more likely to get pulled over than Ray is. This sets them up in a sort of partnership, with each standing to make about $600 per person they take across the river.

What’s interesting here is not what they are doing but what drives the two characters to do it. In Ray’s case, her husband has abandoned her once again because of his gambling addiction. She is desperate to keep her children in school and is struggling not only to get the house she wants to but to keep her children fed (there’s at least one meal that consists of popcorn and Tang). She is at the end of her rope and desperate, and suddenly the idea of pulling in $1200 per day to get her out of the hole that she’s been put in makes a certain logical sense.

For Lila, the story is just as personal. As we learn more about her, we discover that she is a widow; her husband died in a river crossing smuggling people across the border. When that happened, her mother-in-law took her child, essentially kidnapping her grandson, knowing that Lila would have no legal recourse and no ability to petition the tribal leaders to get back her son. The money is, for her, a means to getting her son back, even though it’s the human trafficking that caused all of her problems in the first place.

As should be the case, the film focuses almost entirely on Ray and Lila, and both performances are good ones. Misty Upham may well have been unjustly ignored for a Supporting Actress nomination. Part of that may be that she plays the role almost completely deadpan and with little emotion. It’s hard to see through that, but it’s a performance that hits on the stoic nature of the character’s ethnic roots. It works because of this, not despite it, but it’s also something that I could easily see as off-putting. Charlie McDermott is worth a mention as well. It’s a hard age to get right, and T.J. is a solid blend of anger, defensiveness, and wanting to be the man of the house.

It’s Melissa Leo who really steals the focus, though. This is someone who has been repeatedly beaten down by her life. She is the living picture of it not being the years but the mileage, a woman who has never gotten a break and is prematurely old because of it—poor and wanting only a little more than she has, but never getting the break she needs or simply not seeing things through on her own to get there.

Frozen River is yet another film that is difficult to like but is easy to respect. It makes some hard choices in the characters and doesn’t ask us to like them or like what they do. All it really asks is that we attempt to understand where they are coming from, and it shows us more than enough to let us do exactly that.

Why to watch Frozen River: A unique perspective.
Why not to watch: Even if everyone is understandable, no one is really that sympathetic.