Film: The Fly (1958)
Format: Streaming video from NetFlix on laptop. 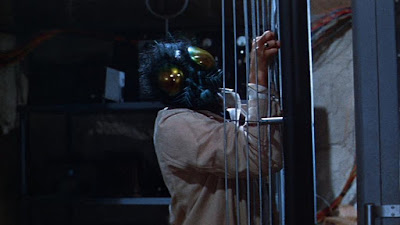 I love classic science fiction and horror. I like the new stuff, too, but there’s a lovely nostalgia that goes along with movies in these genres from 50 and 60 years ago. The science, of course, is often goofy and ridiculous, and that’s a lot of fun. The horror also often seems so tame that it comes across much more charming than scary. That’s not always the case, of course. There are plenty of older films that have a genuine sense of horror and fear. In the case of the original version of The Fly, though, we’re looking at something that is far more about the entertainment than the scare factor.

If you’ve seen the remake from the 1980s, you know the basic story. A scientist develops a machine that allows for matter transference, basically a teleporter. After a number of tests, he transports himself. However, during this experiment, a fly enters the chamber with him and “his molecules” get mixed up with the fly’s, creating one human-sized fly man and one fly-sized man fly. Since this is an older film, we’re not going to get the gory stuff of the remake and the combination of human and fly isn’t going to be at the DNA level. Instead, we’ve got a man with the head and left arm of a fly and a fly with the head and left arm of a man.

What you may not be expecting here is that The Fly occurs in flashback after the first half hour. We start with the murder of Andre Delambre (David Hedison) by his wife Helene (Patricia Owens). Rather gruesomely, Andre was murdered by his wife in an industrial press that smashed his head and left arm to nothing. Helene freely admits to the murder and denies that she is insane, but also tells both her brother-in-law Francois (Vincent Price) and the police inspector Charas (Herbert Marshall) that she did this at Andre’s request.

Of course, Helene is acting strangely and seems extremely aware of any flies in the area. Eventually, she tells any and all that she is looking for a fly with a white head and strange leg. Francois, hoping to help his sister-in-law, tells her that she has caught the fly (even though he hasn’t). At this point she is willing to tell the story. Charas arrives and we jump back into the past so that Helene can tell her story.

That story is what I’ve said—Andre Delambre invents a matter transporter, and we get to see it operate over and over. Eventually, he transports himself—something that we do not see—and the accident occurs. For much of the film, Andre exists with a black cloth over his head so that no one can see him. It’s not until the film is close to the end that we see him with the fly head and not until the very end of the film do we see the actual fly with Andre’s head.

Let’s be honest here--The Fly isn’t a great film. It’s a fantastic idea and one that is worth exploring, but this is not about characters but the situation. As such, it works completely even though it takes us a very long time to get there. It’s a good half hour before we get to Helene’s story and once we get there, we see Andre teleporting dishes, champagne, a newspaper, a disastrous transportation of a pet cat (it simply vanishes into dispersed “cat molecules”; yes, that’s what he says) and finally the successful teleportation of a guinea pig.

Are there basic plot holes? Of course there are, even given the suspension of disbelief in the creation of the machinery. One of the big ones is the size of the teleporters. It’s not clearly evident how Andre could have fit himself into one of the little boxes he was using, and even if he could, how he wouldn’t have noticed the fly in question. And…he got a fly head but kept his own brain? And the little fly with the human head can speak English?

That said, I don’t think it matters. Sure, these are goofy elements of the film, but they actually work pretty well. If there is a problem with The Fly, it’s that it takes too long to get anywhere interesting. The remake is a better film in almost every respect. The characters are better, we see them go through what happens in real time, and it’s a hell of a lot scarier.

But that doesn’t mean that the original isn’t worth seeing. It’s fun. Sure, it’s slow, and it really builds to two specific moments—seeing the man fly and the fly man. But without this film, there are a lot of science fiction/horror movies that we wouldn’t have. See it for the history if nothing else. And, because Vincent Price was a treasure and he got to play good guys so rarely that it’s fun to see him as someone who isn’t the monster.

Why to watch The Fly (1958): It’s classic science fiction fun.
Why not to watch: There’s a lot of build-up for two short shock moments.