Nursed Back to Health 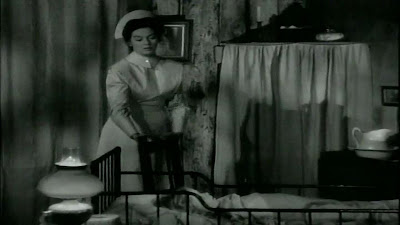 We live in many ways in the best possible time. Sure there are tons of problems around the world and it seems like many of them will never be solved. Some of those problems have the potential to kill us all, but we’ve weathered storms before. Medically, though, we’ve come a very long way. It’s been a long time since most people have had to worry about polio, which was the stuff of nightmares just a couple of generations ago. Sister Kenny is a film about polio and specifically about a radical treatment for polio victims. The film is based on the real life and experiences of the real Elizabeth Kenny. I don’t know how accurate it is, but it honestly plays like the truth.

In the years just before World War I, Elizabeth Kenny (Rosalind Russell) has become a nurse. Her friend and mentor Dr. McDonnell (Alexander Knox) would like her to work at his hospital, but she decides instead to live back at home in the Australian outback and be a bush nurse, tending to the local people who have no other medical care. Dr. McDonnell predicts she’ll last six months, but we flash forward to the people in the area throwing her a party on her third anniversary. During that party, she is called away for a case of a new illness that she has never seen. She sends off a telegram to McDonnell and waits for an answer. The diagnosis comes back as infantile paralysis (i.e. polio). Not knowing what to do, she treats her patient with hot compresses and then works their muscles once their muscle spasms have subsided.

During all of this, Elizabeth’s fiancé Kevin Connors (Dean Jagger) returns from a tour of military duty and the two plan to marry. They head off to tell Dr. McDonnell that she will be retiring from nursing, and she brings along one of her patients to show the success of her treatment. She never gets around to the marriage part, though, because there is a terrible outbreak of polio. Local authority Dr. Brack (Philip Merivale) is convinced that he knows the proper treatment for polio and is equally convinced that Elizabeth’s success was due to her not actually treating polio patients. Brack, as you might suspect, comes off as an arrogant shithead, unable to think that a mere nurse has discovered a better treatment for his specialty.

What ensues, then is years of work from Elizabeth Kenny. During World War I, she joins the military and naturally finds a way to spend time with Kevin, who is wounded. This is also where she earns the rank of “Sister,” and it is the title by which she is referred to for the rest of the film; there’s no nun-ifying here. After the war, the two plan to marry again, but Dr. McDonnell convinces her to continue her work, assuring her that within a few years the medical profession will come around.

And, of course, it doesn’t. “A few years” eventually becomes more like thirty, and we’re in the middle of World War II when the film ends, with Elizabeth and Kevin never tying the knot because of her dedication to the stricken children of the world. She treats polio victims in Australia, Europe, and eventually the United States, and in each case she is attacked by the medical professionals in the area despite her obvious success.

Films like Sister Kenny are problematic for me because they do two things at the same time. On the one hand, Sister Kenny shows the value of experimentation and the scientific method. Elizabeth Kenny’s treatments evidently did actually work. In fact, there’s some evidence that Rosalind Russell campaigned hard for this role because a nephew of hers was treated with Kenny’s methods and made a full recovery. The problem is that because Elizabeth Kenny didn’t actually work within the system, she was seen as an outsider and a crank, even though she wasn’t.

So what, right? Well, the problem is that there are a lot of people in the world who see films like this one as validation. Homeopaths, psychic healers, people who align chakras and anti-vaccination wonks are also all outsiders in the medical field--and they are for a reason. This film gives them power, though—it validates their stance that the medical profession is filled with stupid, hidebound, arrogant people who don’t really care about their patients and aren’t really concerned with finding real treatments. They feel vindicated by this sort of story, and it emboldens them and strengthens their resolve despite the fact that they are either scamming a gullible public (at best) or doing measureable harm.

Rosalind Russell is fine in the film, but it’s hardly her signature performance. It’s actually toned down for her in a lot of ways. The age make-up is actually the real star here. Sister Kenny doesn’t play the Hollywood game of pretending that people don’t age over a few decades. Rosalind Russell (and the rest of the cast) actually do age, and they look like they’ve actually aged. It’s solid work and is really the most impressive part of the movie.

Why to watch Sister Kenny: Medical stories have built-in drama.
Why not to watch: It emboldens actual medical quacks.