Off Script: Only Lovers Left Alive 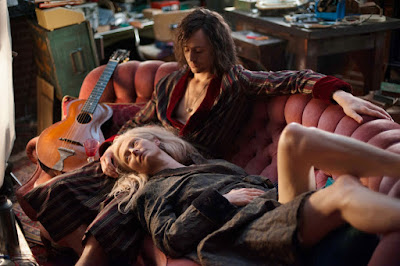 I don’t know if Jim Jarmusch can be considered an acquired taste because I liked Jarmusch’s films from my first viewing of them. While I could probably rank his films in some order, every one that I have seen is one that I’ve liked. Only Lovers Left Alive is a film that I’ve wanted to see for some time, and it’s a film that makes me angry on a specific point. That it does says far more about me than it does about Jim Jarmusch or Only Lovers Left Alive.

In a very real sense, this is probably the least horror movie horror movie I’ve seen in a long time. It’s classified as such only because our two main characters and two of their main associates are vampires. We’re never actually told that they are vampires and that word appears nowhere in the film, but they have fangs, drink blood, can’t go out during the day, and appear to be undying. The film is not so much about them tracking down victims and killing them or about the tortured love between vampire and human victim, but about the endless toll of the years on them and their troubled and increasingly difficult existence in the modern world.

Adam (Tom Hiddleston) lives in a virtually abandoned section of Detroit. His only real contact with the outside world is through Ian (Anton Yelchin), who procures rare and expensive musical instruments for him. Adam survives by buying blood from a local hospital (or possibly blood bank) from a doctor (Jeffrey Wright). From the very beginning it’s implied that the blood of humans has become tainted in some way, and drinking directly from the source has certain risks involved.

Halfway across the world in Tangier live Eve (Tilda Swinton) and Christopher Marlowe (John Hurt). Yes, that Christopher Marlowe, who in the world of the film really is the author of all of Shakespeare’s sonnets and plays. Marlowe acquires “the good stuff” through his connection Bilal (Slimane Dazi), who then gives some of that to Eve. Despite their separation, Adam and Eve are married. When they talk, Eve senses that Adam has become depressed and possibly suicidal, so she journeys by night to visit him. Her instincts are correct—Adam has recently commissioned a wooden bullet made that he can use to shoot his own heart.

Reconnecting with Eve brings him back a bit, though, but trouble begins with the arrival of Ava (Mia Wasikowska), Eve’s sister. Ava, while certainly centuries old, is considerably younger acting than both Adam and Eve. She is also reckless, and her actions force Adam and Eve to make some difficult and potentially life-threatening decisions.

Truthfully, there’s a lot to unpack from Only Lovers Left Alive. First is the overall style of the film, and this is a film that drips with style and atmosphere. Virtually all of the film (of course) takes place at night, and much of the idea of decay and degradation of humanity and society is reflected in the blasted landscapes of Detroit. It’s all abandoned factories and boarded up houses, as much a ghost town as anything left behind after a bombardment. There’s no question that Jarmusch chose Detroit specifically for this reason. The music—much of it attributed to Adam—seems to touch on the same themes of death and decay, and comes across as nothing so much as modern funeral dirges.

The characters themselves are equally stylized. Adam wears only black while Eve wears mainly white touched sometimes with a little red. They are yin and yang, male and female, despondent and still aching for experience, filled with ennui and curious of everything. While opposites in so many respects, they are also similar in many, two sides of the same coin.

I also find the characters’ reaction to blood to be fascinating. They are much less feeding on and dependent on blood than they appear to be addicted to it. A small aperitif glass of “the good stuff” (which is apparently type O-negative) causes an almost heroin-like reaction. It’s an interesting choice.

I’d be remiss if I didn’t spend a few lines on John Hurt. I love John Hurt. I like listening to him talk and any movie that has him in it, for me, has an immediate bump in its favor. He’s not in this much at all, but his presence looms large over a great deal of the film, since it is implied in some sense that both Adam and Eve are his spiritual (and possibly vampiric) children. Both of them hold him in high esteem, so that even their conversations in Detroit seem to have a little bit of Hurt’s Marlowe in them.

So why does this make me mad? Because I’m not that good a fiction writer. I had the idea years ago to explore what might happen with vampires living in a world plagued by AIDS, but I didn’t have the chops to pull it off. Now, when I think I might actually be able to do it, Only Lovers Left Alive has more or less done that very thing without doing it explicitly.

The fact that I’m a shit writer shouldn’t mean that you can’t enjoy this film, though, and you should enjoy it. It’s a hell of a good story and it’s beautifully realized. In fact, the only real possible downside to Only Lovers Left Alive is that for a horror movie, there’s not a great deal of horror in it. Seriously, how much horror do you expect to get from vampires who rob blood banks and not jugular veins? Still, while there’s not much scare, there’s a lot of beauty and a great deal worth seeing.

Why to watch Only Lovers Left Alive: Only Jarmusch could make a vampire film like this one.
Why not to watch: If you’re looking for a real horror movie, this isn’t it.