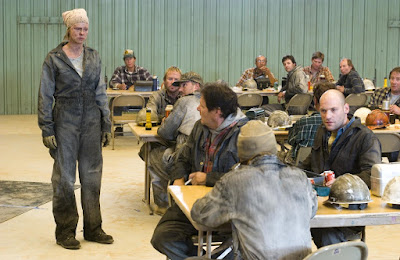 One of the problems with watching Oscar films is that I don’t get a lot of horror, science fiction, or comedy. I’m watching the horror lists (and am thinking of adding a few more) specifically because otherwise my diet is pretty much drama drama drama. That’s what I signed up for with North Country, a film in which Sean Bean survives, Jeremy Renner plays a sleeze, and Charlize Theron once again plays less glamorous in search of Oscar gold.

North Country is about the first ever class action sexual harassment lawsuit, which means you should have a good idea of what we’re in for. Lots of public shaming, Charlize Theron getting grabbed, and, what the hell, a rape tossed in for good measure. Oh, and family drama. And ALS. Sorry, that’s probably rude of me. If I come across as bitter, it’s only because North Country isn’t an easy film to sit through. Since it is a social justice film we’ve definitely got a destination that we’re heading to, but getting there is going to be ugly.

Fleeing her abusive husband, Josie Aimes (Charlize Theron) returns to her hometown in northern Minnesota. Here she reconnects with Glory Dodge (Frances McDormand), an old friend, who is working at the local mine. Realizing that a change in career will probably pay more and get her and her children out of her parents’ home, Josie gets a job at the mine as well and discovers a world of abuse, “jokes,” and sexual harassment created by a male-dominated culture filled with men who believe that women shouldn’t be working in the mines.

This is the difficult part of the film, of course. We’re given a front row seat of the brutal treatment of the women in the mine, and if the film is anything like the reality that the women suffered, it’s the sort of thing that would shut down the average company now in a long weekend. Any complaints are met with indifference and are followed by immediate and escalating reprisals. Josie in particular is a target of Bobby Sharp (Jeremy Renner), an old high school boyfriend who witnessed her being raped (a rape that led to her older child) and did nothing to help her. Eventually, Josie has had enough and quits, and then contacts Bill White (Woody Harrelson), a lawyer and friend of Glory and her husband Kyle (Sean Bean) to sue the mining company. Coincidentally, all of this is happening during the Anita Hill hearings, an event that brought sexual harassment into a great number of American homes.

North Country works specifically because it doesn’t hold back. It’s worth noting that I don’t know the details of the actual case North Country references, because this is a highly fictionalized account. The real case didn’t go to court until the 1990s, for instance, and the real plaintiff was named Lois Jenson. So it’s entirely possible that scenes like women being tipped over in porta-potties and finding their locker room smeared with human shit aren’t real instances of the abuse they suffered. However, it wouldn’t surprise me. Like I said above, this is the sort of thing that would get a company shut down in a couple of days if it became public.

So let’s talk cast. Charlize Theron is, of course, great because she generally is. I think Woody Harrelson gets underrated pretty frequently as well. He’s a solid dramatic actor and capable of handling himself in a role well when he’s given good material. And, of course Frances McDormand and Sean Bean are consistently reliable in anything they are given. Both Theron and McDormand were nominated for Oscars—evidently Frances McDormand does well with nominations when she sports the Minnesoter accent.

But hey, Sissy Spacek and Richard Jenkins are in this as well as Josie’s parents and quintessential that-guy John Aylward steps in as the judge. It’s one of those “kill to have them in your movie” casts that crop up now and then. Director Niki Caro gets good performances out of all of them, with Theron, McDormand, and Jenkins coming out the best of a good crop.

It’s also a film that is brutally stark in the way it is depicted. This is a hard place and a hard life, and the cinematography reflects that. There’s not a lot of beauty here, but a great deal of grey and black. It’s filled with dirt and grime, and almost everyone looks constantly tired and in need of another shower, even if they’ve just showered. It works for the film completely.

Honestly, I’m not sure it’s a film I’ll watch again anytime soon, but that has nothing to do with the quality of the film itself. It’s the sort of film that people should see. It’s “important” in the sense that it’s about an issue of which people should be aware, but it’s also singularly unpleasant, and for the same reason. Things like this happen when people don’t know about them. People get ugly when they think no one is looking and when that happens, we need to be reminded of what it’s wrong. North Country does that. It makes it so easy to picture anyone we know in that same situation and that makes it easy to get us enraged. It works, and that might be the biggest compliment I can give it.

Why to watch North Country: Social justice films are important, and few have a cast like this one.
Why not to watch: It’s far too easy to picture yourself, your wife, your mother, your daughter, or your sister enduring the same treatment.