Film: When Marnie Was There (Omoide no Mani)
Format: DVD from NetFlix on rockin’ flatscreen. 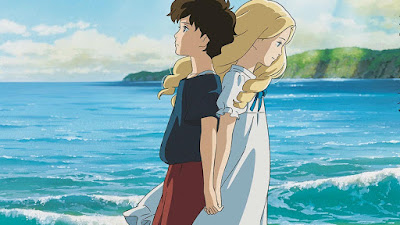 Probably the biggest compliment that can be paid to an animated film is that it creates characters that, regardless of the story or the fantastic elements that might be included, are very real and very human. There’s a moment in the first 15 minutes or so of When Marnie Was There that, more than anything else, sold the story to me. Our main character, Anna, is crossing a marsh at low tide and stumbles just a little. She doesn’t fall, doesn’t trip, and doesn’t stumble for any reason other than that she places a foot wrong for just a second. It’s completely unnecessary and completely human, and it’s a thing of beauty. It shows such lovely detail of making a character a real person, and it’s one of the little things that makes Studio Ghibli films worth watching.

Anna (voiced in the English version by Hailee Steinfeld) is a 12-year-old girl who feels out of place. She lives in Sapporo with foster parents, and keeps to herself, spending her free time sketching. After a serious asthma attack, Anna is sent for the summer to visit with her foster mother’s relatives Kiyomasa (John C. Reilly) and Setsu (Grey Griffin). It is there that she encounters an old, dilapidated mansion that seems to draw her to it. In her dreams, she sees the mansion inhabited by a young girl with blonde hair.

Anna continues to have these dreams, but one night during a local festival, she runs off and sees a light in the mansion. Finding a rowboat, she heads out to the house to discover the blonde girl that she had seen in her dreams. This is Marnie (Kiernan Shipka), who evidently lives in the house. When Marnie is in the house, the house is repaired and beautiful, but at other times when Anna goes to the mansion, she sees it as a dilapidated old house.

As the film continues, the real world and what appears to be Anna’s dream world continue to clash and blend. Sketching on the beach, Anna meets Hisako (Vanessa Williams), who sees Anna’s drawings of Marnie in her sketchbook and comments that the girl in the pictures looks like someone she had known many years ago. This is when Anna finds out that the old marsh house has been purchased and is being refurbished. Anna goes to investigate and meets Sayaka (Ava Acres), who has discovered a diary penned by Marnie, and the events in the diary match Anna’s experiences with Marnie. And as the story continues, Anna’s connection to Marnie becomes more and more evident.

What When Marnie Was There does so well is what so many Studio Ghibli films do so well. It creates a real world, a place of magical realism that functions as a both the real world and a fantasy world. That moment I mentioned at the top is indicative of the sort of detail Studio Ghibli puts into its films to make the film world as real as possible despite being an animated film. It’s also that attention to detail that makes the fantasy worlds they create work as well as they do.

It’s worth noting that When Marnie Was There is not a story for younger children. This is definitely a story that children will find interesting, but that many may find difficult to watch. Younger kids may be interested in some of the fantasy elements, but there are some harsh realities here that may not be appropriate for kids expecting something along the lines of My Neighbor Totoro.

For me, though, this is a selling point of the film. When Marnie Was There is a film for those middle teen years too old for the latest kids’ movie and not old enough for something R-rated. It doesn’t shirk being about real issues and having some ugly truths in it. It respects that its audience will be able to handle this, and I appreciate that as well.

It’s also, as expected, beautiful. It’s unfair to call Studio Ghibli a Japanese Pixar, because their films are very different in many ways, but both film companies have demonstrated over and over that they can tell great stories and aren’t afraid to tell their audience stories that aren’t pure happiness and don’t cheat the endings.

Why to watch When Marnie Was There: While the fantasy elements feel like the focus, it’s really about the characters.
Why not to watch: It feels a little like Miyazaki, but it’s not Miyazaki.