Two Shakespeare Plays in One 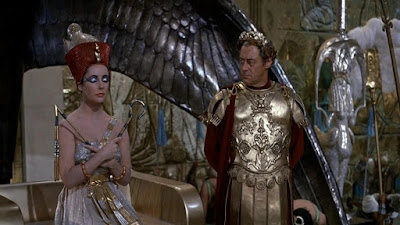 I’m on a short vacation, and am spending the next few days doing a lot of cleaning around my house. Fun, right? It makes sense to me, though, that as I get these breaks between quarters, that I should attempt to knock out some of the longest films I have left on my Oscar lists. The biggest of those Kahunas is Cleopatra from 1963, the only remaining film I had that crossed the four-hour mark. So, while I degrease my kitchen, I’ve spent far too long watching the only movie to both top its year’s box office receipts and still lose money.

It’s a stretch to say that this is really two complete plays of Shakespeare, but it touches on Julius Caesar in the first half of the film and then pretty much runs through the entire plot of Antony and Cleopatra. As such, Cleopatra is very much a film of two halves. The first half deals with Julius Caesar’s (Rex Harrison) battles with Pompey and his encounter with Cleopatra (Elizabeth Taylor). It follows through to the death of Caesar at the hands of the Roman Senate. It touches on a bit of the chaos afterwards, but essentially puts the last couple of acts of Shakespeare’s play into a 60-second voiceover. The second half of the film, which starts with that speed through of the revenge for Caesar’s death, concerns the romance between Cleopatra and Mark Antony (Richard Burton). This section, slightly longer than the first (although the film is pretty neatly divided in halves), follows Shakespeare’s play pretty closely.

I find a number of things about Cleopatra interesting. Rex Harrison earned a Best Actor nomination for his role as Julius Caesar despite the fact that he’s dead a few minutes before the halfway point of the film. Admittedly, for a film of this length, that puts him on screen about as much as the main character of a typical film. Additionally, while the film is named after Elizabeth Taylor’s character, Caesar is very much the main character of that first half of the film. In fact, Taylor is almost (almost, mind you) in a supporting role, since Burton’s Mark Antony dominates the second half of the film.

In terms of these performances, it’s not much of a shock to me that Harrison is the one who walked away with the nomination. As he generally was, Rex Harrison is completely watchable and completely entertaining. Burton, as always, chews any scenery he can find, and in this movie, there’s a lot of available scenery. Burton’s Antony bellows a lot, but if you’re familiar with Burton, this won’t be a shock. Near the end, when Mark Antony has been soundly defeated in battle, he comes across as subdued, and he’s a lot more effective. Taylor’s Cleopatra is petulant and comes across as sexually advanced but otherwise childish. It’s not a performance that I would name as one of her best, or probably one of her top 10. We’ve got a solid supporting cast here as well. Specifically, Martin Landau steps in as one of Antony’s lieutenants, Hume Cronyn as one of Cleopatra’s advisors, and Roddy McDowell as Octavian, who is more or less the villain of the latter half of the film. These are all actors I like and they are all pretty good in the roles they’ve been given. McDowell, who I like in general, plays Octavian as something of an effete warrior (he sits out the climactic battle because he is seasick) but a solid political strategist. He’s kind of an asshole, but he’s a brilliant asshole. It’s worth noting that except for a clerical error from 20th Century Fox that listed him as a leading actor, McDowell almost certainly would have been nominated for—and quite possibly won—a Best Supporting Actor Oscar for the role.

The big story, of course, is Elizabeth Taylor’s vast number of costume changes, which are merely a small part of the film’s essential opulence. Taylor wore something like 65 different costumes. The film’s $44 million cost equates to roughly $340 million in today’s dollars, a staggering amount. It’s hard to say that all of that shows up on the screen, but a great deal of it does. There are huge sets and a massive ocean-bound battle evidently made with real ships. Taylor’s costumes themselves cost a cool $1.5 million in today’s dollars and included one costume made of 24-carat gold thread. All of these various costumes seem to do their best to accentuate Taylor’s cleavage. Since she has a scene in the bath, it also might be the closest she ever came to a nude scene.

That opulence is the real reason to see this. Cleopatra is ridiculous, overblown, and pompous. It was apparently originally conceived as two three-hour movies and was eventually compressed into the film we have, and since it does feel like a two-hour movie followed by a two-hour sequel, I can believe it. I think it’s just too much. It could stand another solid trimming. Sure, it’s a big story, but it doesn’t need to be anything close to this big.

I can’t imagine devoting another four hours to this. It definitely has its moments and the spectacle is probably worth seeing once, but not a second time.

Why to watch Cleopatra (1963): It’s a spectacle and a half.
Why not to watch: It’s bloated, overlong, and pompous.