Love on the Ward 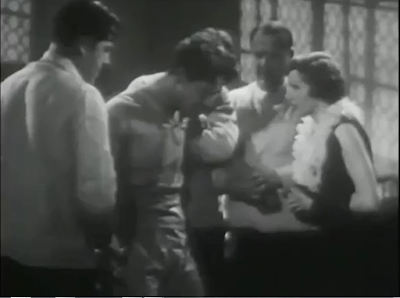 This is going to sound mildly heretical, but I really don’t understand the appeal of Claudette Colbert. Sure, she’s good in It Happened One Night, but I get the impression that I’m always supposed to find her irresistible and I find her pretty resistible. I don’t know what it is. The last of her Oscar nominations for me to see is Private Worlds, and since knocking out a rarity now and then keeps my stress levels down, that’s what I went for tonight.

Private Worlds packs a good deal of weird into its 82 minutes, so it’s got that going for it. The film takes place inside a mental hospital, and while it concerns the doctors and their lives more than anything, we get a few glimpses of some of the patients. As the film opens, everything at the hospital is clicking on all cylinders. The patients are treated with kindness and respect, even if the matron (Esther Dale) disapproves and wants everyone tossed into solitary. Running the hospital is Dr. Alex MacGregor (Joel McCrea), who is ably assisted by Dr. Jane Everest (Claudette Colbert). A woman doctor for this time is pretty surprising and a woman doctor in an asylum is even more surprising.

Alex heads off to see if he will be named to the position of superintendent of the hospital, a role he believes he has more than earned. This opinion is shared by Jane and by Alex’s wife Sally (Joan Bennett). But it is not to be. Instead, a new doctor is being put in charge. Dr. Charles Monet (Charles Boyer) runs things differently than MacGregor does, and absolutely cannot abide women doctors. Alex reacts badly to all of this, threatening to resign, but Jane decides to stick it out and give the new doctor a chance (and it’s implied initially and eventually confirmed that at least a part of her reason is because the doctor looks like Charles Boyer).

Dr. Monet’s arrival brings another complication as well: his sister Claire (Helen Vinson) Claire doesn’t like the idea of living inside the walls of the hospital and longs for more interesting company. At a small party, she immediately latches onto the married Alex, who begins spending far more time with her than a married man should. This makes Sally doubt herself, and suddenly she’s wanting to help with the patients and eventually has a full-blown psychotic break herself.

I fully expected this to be a film about Dr. Jane Everest proving her value to mean, hidebound Dr. Charles Monet, but the film actually handles this scene really well. One evening, Dr. Monet sits with an Arabic patient who is merely looking for someone to pray with him. Monet does—in Arabic, no less—which Jane finds rather charming. Monet, though, makes the critical mistake of drawing a curtain around the patient, which sets off another patient into a panic. It’s Dr. Everest who calms him down, demonstrating to Monet that she does actually know what she’s doing and he may have been wrong about her all along.

Of course there’s going to be a real love story here, not the cheap and tawdry one between Alex and Claire, but (of course) between Charles and Jane. It’s continually hinted at through the bulk of the running time, but it doesn’t really come to fruition until the end. Again, of course. That’s the biggest downside of the film in my opinion. It does a lot of things very interestingly. It doesn’t dwell on the patients but does treat them with a certain amount of respect. It presents a woman doctor in a difficult field in a time when women weren’t doctors, and presents her as a true professional. And then it goes right for the standard movie romance trope and kind of spoils the whole thing.

I said at the top that I don’t love Claudette Colbert, and I don’t, but I have to admit that she’s not bad in this. I find it funny that even in a film set in a mental hospital the filmmakers have gone for glamor, putting Colbert in a variety of outfits as she makes her rounds. Evidently, women can be psychiatrists, but having them walk around constantly in a lab coat is just beyond the pale.

Ultimately, Private Worlds (the name comes from the idea that each of us has a private world inside our own heads) is necessary only for Colbert completists. It’s not a terrible film, but it’s also not really a great one. It could have been. Ditch the unnecessary romance and give us something about women in that profession, and we’d have a real movie worth watching. As it is, it ends up being just a curiosity.

Why to watch Private Worlds: Early feminism and early mental health in the movies.
Why not to watch: It had such potential to break interesting ground and it manages to break almost none of it.