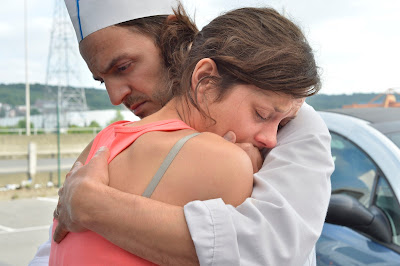 I don’t remember precisely when Marion Cotillard became the darling of movie fanboys everywhere. I think it may have started with Public Enemies followed by Inception. Regardless, there were a few years in the movie blogging community when everyone seemed to be madly in love with her. I like Marion Cotillard just fine; I think her performance in La Vie en Rose is one of the best of the decade, but I don’t really understand why she was a “thing” for a few years. Regardless, in 2014, she earned a rare non-English-speaking Oscar nomination for Two Days, One Night (Deux Jours, Une Vie in French). Since this is the last chance I’ll have for more than the next week for something subtitled, I figured I’d give it a shot.

Two Days, One Night is a film with a depressingly realistic plot that is devilishly simple. Sandra Bya (Cotillard) has suffered a mental breakdown and has been forced to take a leave from her job working in a solar panel factory. During her absence, it is discovered that the other 16 workers, by each working an extra three hours every week, can cover her shift and complete her work. The film starts as she is ready to return to work, only to be told that the rest of the crew has been asked to vote. Either Sandra can return to work or they can each have a €1000 (a little over $1100) bonus. But they can’t have both. Pressured by the foreman, 14 of the workers vote for the bonus. Sandra is told this by her coworker Juliette (Catherine Salee), one of the two who voted for her.

Juliette and Sandra confront Dumont (Batiste Sornin), who agrees to a new ballot on Monday. This gives Sandra and her husband Manu (Fabrizio Rongione) the weekend to contact the 14 people who voted against Sandra to see if she can change their minds.

And really, that’s it. We watch Sandra go from place to place, dealing with the pressure of essentially begging her coworkers to take her back. Like many of the films from the Dardienne brothers, the entire plot revolves around how people deal with money and the lack of money. In many of Sandra’s conversations with her coworkers,, these people cite their need of the bonus, that without it they can’t make it. Essentially, each of these people is put in a terrible moral position. On the one hand, each one needs the bonus—some for trivial reasons (one person wants to build a patio)—others for much more serious ones. But most are also capable of empathizing, knowing that they are essentially selling out a human being for €1000.

I also find it a very difficult film to judge. It contains many of the Dardenne hallmarks: handheld camera work, no musical score through the film, moral issues, and the struggling poor. The moral question is one worth asking. Throughout, Sandra’s plight is obvious. Without her working, she, her husband, and their two children will likely have to revert to taking government assistance, and they might lose their house. In some of the cases of her coworkers, the bonus is significant, and might mean the difference for their losing their houses as well. Each of them, or at least most of them, are in the ugly position of having to decide between doing something they feel is right and doing something that they feel is necessary. It’s a great set-up for a plot.

And it’s handled well. There is a certain desperation in Sandra more or less begging her coworkers to save her job. It’s humiliating, and at one point, I realized that no matter what happened, she probably couldn’t continue to work for the company. How do you stand next to someone at work when that person voted to take a bonus over allowing you to keep your job?

There are two significant problems with Two Days, One Night. The first issue is much more obvious and much less significant. Sandra has essentially the same conversation more than half a dozen times through the course of the film. I lost count of the precise number of times I listened to her say almost the exact same thing to yet a different coworker about how Dumont is allowing another ballot. At some point, I wanted these conversations to start half a minute in so I didn’t need to hear about the new ballot again.

A larger problem is what I think is a massive plot hole. When Sandra is forced to leave work for a time, her work is picked up by 16 people pulling an extra three hours per week, rendering her unnecessary. Except that this means the factory is paying out 48 hours of overtime every week, and unless Sandra has some sort of seniority or has been there forever, her salary has to be less expensive than paying out more than a full week’s wages at time-and-a-half. It would seem that bringing her back on would represent a significant savings to the company, which would seem to come with a potentially bigger bonus.

Marion Cotillard, of course, is excellent, as she usually is. But I still don’t know if I like this film or not. I like the idea of it much more than I like the execution, since that execution seems to leave a hole big enough for, perhaps, a solar panel.

Why to watch Two Days, One Night: A real and realistic modern story.
Why not to watch: The number of times you’ll hear the same conversation and one massive plot hole.