(Not So) Green Acres

Film: The Southerner
Format: DVDs from NetFlix on laptop. 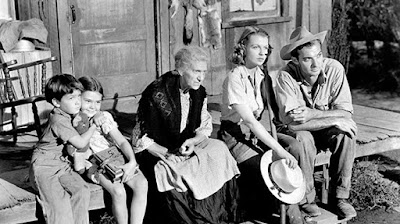 NetFlix moves in mysterious ways sometimes. I get only a single movie at a time, but despite having Cleopatra, I was sent The Southerner for no discernable reason. So what can I do? It’s a movie I have to watch eventually, and I won’t get anything new until I send it back. It’s not a movie I was prepared to watch though, and while yes, I would have had to watch it eventually, it’s not the sort of film I like very much. The Southerner is yet another “misery parfait” movie where nothing much good happens to our main characters, everyone seems to be out to get them, and even the forces of nature are turned against them for the entire short running time. At least it’s short, clocking in at just over 90 minutes.

Stop me if you’ve heard this plot before. Sam Tucker (Zachary Scott) and his wife Nona (Betty Field) are cotton sharecroppers trying to raise their kids Jot (Jay Gilpin) and Daisy (Jean Vanderwilt) and keep alive the cantankerous and consistently negative Granny Tucker (Beulah Bondi). What Sam really wants more than anything is to raise his own crop and make all of that sweet farmin’ money for himself. He arranges with his boss to clear off a patch of land that has lain fallow for some time so that he can raise his own cotton. Of course, the house on the property is a house in name only in that it has four walls and something like a roof. And, of course, the well is dry.

What follows is pretty much what you expect. This is, more or less, the standard story about poor farmers who are plagued by everyone richer than they are, greedier than they are, and by unpredictable weather, insects, and other forms of natural disaster. This is exactly that movie.

So what are the problems here? Well, the Tuckers manage to survive an impossibly cruel winter living off what Sam can hunt. Their neighbor Devers (J. Carrol Naish) wants the land for himself, so aside from them using his well, he works against the Tuckers constantly. Young Jot becomes sick with “spring sickness” (probably pellagra) and requires milk and fresh vegetables, but no one will extend credit to the family and Devers certainly won’t give them milk. In fact, Devers sends his nephew Finlay (Normal Lloyd) out to destroy the Tuckers’ vegetable garden so that maybe they’ll move away. Even the offer from a family friend (Charles Kemper) to get Sam a job at a factory doesn’t go over well despite the factory job paying more per day than Sam got sharecropping in a week.

The truth is that I’ve seen this story done better multiple times. The Grapes of Wrath hits on some of the same basic themes. So does The River and so does The Good Earth to pick on one from a similar era. The Milagro Beanfield War plays the same basic story as a comedy. The film that I am most brought in mind of, though, is Jean de Florette. Given the choice of “farmers have a shitty life” movies to watch, that one would be my pick.

Keep the same basic theme but change the characters from farmers to another profession, and this really is a film you’ve seen time and time again. Salt of the Earth, Battleship Potemkin, Silkwood…the list goes on. It’s honestly not that far away from North Country, which I watched a few days ago. The Southerner is just another in a long series of films that seems to have little more to say than that life is pretty awful and people who are poor are noble while people who aren’t poor aren’t poor because they are shits.

I admit that there is something primal about this centering on a farm rather than a factory or another type of work. I think we’re more or less bred to believe that farming is a noble profession, that there is something inherently ennobling about working the earth and raising crops, relying on our own skill and ingenuity and hard work. But I’m frankly tired of being told that that sort of nobility comes at a cost of anything decent in life.

Admittedly, if the Tuckers don’t have a string of bad luck we probably don’t have much of a movie. There’s not a lot to recommend a film where only good things happen to people. However, The Southerner is oppressive in the amount of misery it piles on the Tucker family. Beyond that, Sam has a way out of this particular misery. We’re told that he made 75 cents/day sharecropping and his friend offers him a job making $7/day at the factory, but Sam won’t take it. Why? Because cotton.

This was a waste of my time. You know that no matter what happens, nothing good is ever going to happen, and when the film winds up, the Tuckers are in the same place as where they started, having earned nothing and having learned nothing. It’s hard to have sympathy for rock stupid.

Why to watch The Southerner: Because watching other people’s misery makes you feel better.
Why not to watch: The world is depressing enough.