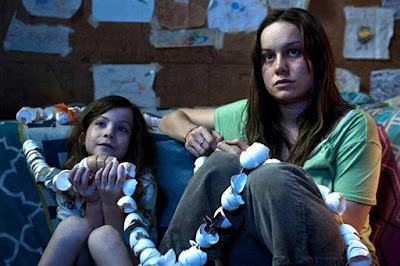 There are movies I look forward to and movies that I watch because they are on one or more of my movie lists. I can’t say that I was looking forward to Room. I knew the basics of it going in, and since I watched the Oscars a few days ago I went into this knowing that Brie Larson won Best Actress for this role. But it’s not a story that I was looking forward to seeing. Following the Oscar lists means I sign myself up for far more drama and emotional pain that I would normally look for in my movie watching.

Ma (Brie Larson) and Jack (Jacob Tremblay) live in a place they call Room, a 10x10 space with a bathtub, sink, tiny kitchen, toilet, a television, and a bed. For Jack, Room is the only place that exists; it is the entirety of his world. In the night, a man they call Old Nick (Sean Bridgers) comes and Jack is forced to sit in the wardrobe until he is gone. In Jack’s world, the only thing outside room is outer space, and the only view of the world outside Room is the skylight.

In reality, Ma is named Joy Newsome, and she was abducted by a man who keeps her in his garden shed. Presumably the shed has been significantly reinforced to prevent Joy from leaving, and a numeric keypad has been installed on the door. Jack is Joy’s son by the man who abducted her, and his nightly visits are precisely what you assume they are.

The film starts around Jack’s fifth birthday. Presumably, Joy has been waiting for Jack to reach this age to figure out a way for the two of them to escape. She tells Jack about the real world, and, because his experience is just Room and television, he doesn’t believe the story. But she convinces him to play sick in the hope that this will get Old Nick to take him to the hospital. Instead, he goes for antibiotics. Joy decides instead to convince Jack to play dead, and she wraps him in the rug, telling him to unroll himself when he can and to jump out when Old Nick’s truck is stopped. Jack does so, and, while he’s caught for a moment, he manages to escape and give just enough information to the police to effect a rescue of Joy.

This takes us through the first half of the film. The rest is, as it should be, about Jack learning about the outside world and Joy’s painful readjustment to life outside Room. This includes discovering that her parents (William H. Macy and Joan Allen) have divorced and that her mother is now living with Leo (Tom McCamus), a family friend. Joy’s readjustment is naturally difficult, slow, and painful, and much of this is seen through the eyes of Jack, who doesn’t fully understand everything that is going on around him.

There are things about Room that work and things that don’t. The main strength of the film is in its performances. Brie Larson is excellent in this, in a role that was certainly demanding. It’s also worth noting that Jacob Tremblay gives one of the better child performances in recent memory. Toss in a good (if small) performance from Joan Allen, and you have the main thing that works here. Okay, we can add Sean Bridgers in a small and completely thankless and ugly role as well.

But there’s a lot here that really doesn’t work. The primary thing is the garden shed. I get that in a sense the shed is needed for the actual space that Joy and Jack live in, but it seems mindboggling to me that Joy wouldn’t have found a way out in the seven years(!) she is held captive. This is a garden shed we are talking about, after all, and even reinforced, it wouldn’t be completely impervious to being worn down. The fact that there’s a mouse that shows up in Room at one point indicates that the walls can be gotten through. Even the keypad is a problem. A dedicated effort could run through the 10,000 four-digit combinations in a day. Even if the combination is a longer one (she’d know simply from hearing button presses when Old Nick enters or leaves), it’s not like she would have much else to do during the day. A basement seems like a better choice, and more easily soundproofed as well. An attic, reinforced solidly, would even offer the same option for a skylight.

That’s really the biggest issue with Room. The abduction, the birth of Jack, and many of the factors of the story are completely plausible, but the actual physical confinement seems so flimsy. The only real explanation for Joy not seeming to try to escape is something like Stockholm syndrome, which would seem to go against the fact that she definitely wants to escape and plots to do so.

I expected a revelation with Room and I didn’t get it. It’s not a bad film, but it’s not one that is anything like what I expected to see. I admit that it was a film I wasn’t looking forward to because of the subject matter, but ultimately it’s a film I probably won’t watch again because I can’t get around the necessary willing suspension of disbelief for the physical nature of Joy’s and Jack’s captivity.

EDIT: I try not to read other people's reviews before I post mine. It's interesting that Chip Lary came to the same conclusion I did about the flimsy nature of the shed and the keypad. Great minds and all that. He posted first, though, so he wins.

Why to watch Room: A truly unique story.
Why not to watch: A concerted effort from Joy would’ve gotten her out in a lot less than seven years.