I MIssed the Music

Film: Anna and the King of Siam
Format: Movies! Channel on rockin’ flatscreen. 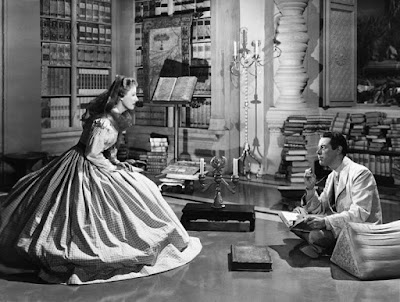 Sometimes, you take a small step backwards. This happened to me when I watched the 1937 version of A Star is Born. It’s a good film in its own right, but it can’t compete with the 1954 version, and that’s the one I saw first. The same has happened with Anna and the King of Siam. This is a story I know and have seen before because I’ve seen The King and I, which features the defining role for the great Yul Brynner. Anna and the King of Siam is a fine film on its own, but side by side it can’t measure up.

I think it’s likely that you know the story. Anna Owens (Irene Dunne, and this story is based on the life of Anna Leonowens) arrives in Siam in the 1860s. She has been given the task of teaching the many children of King Mongkut (Rex Harrison). There is a great deal of culture shock, and much of the film concerns this. Anna is extremely (in the word of the day) headstrong, and a stubborn woman does not go over well in the court of the King of Siam. This lesson cannot evidently be taught to Anna despite the frequent efforts of Mongkut’s Prime Minister (Lee J. Cobb).

Over time, Anna and her voluminous dresses are more and more accepted by the king, his dozens (and dozens and dozens) of children and his entire harem. She attempts to teach them English and to become a more modern society while Mongkut resists in many ways despite his stated desire that Siam become a more modern country in all ways. This is despite the continued practice of slavery, the constant kowtowing, and the impossibility of Mongkut ever being wrong about anything, even when he’s wrong about something.

The natural comparison here, of course, is with The King and I, and Anna and the King of Siam suffers mostly because it was filmed in black-and-white rather than the glorious color of the musical version. But it’s kind of an unfair comparison. There is no question that this was a spectacular production filled with lavish sets and costuming, and it’s no surprise that it was nominated for (and won) the Oscar for both black-and-white cinematography and art direction. At the same time, it’s difficult not to think of what it might have looked like in color, a stray thought in a normal situation, but a real one when comparing this with a film that uses color to great effect.

One thing that is very different is that Anna and the King of Siam doesn’t shy away from being a great bit darker than the later musical version. The fate of Mongkut’s favorite wife Tuptim (Linda Darnell) is much darker here, as is the fate of Anna’s son Louis (Richard Lyon). I rather like this about the film—it feels in some ways more real because it also feels as if it is probably closer to the truth. There is (despite the actors not aging) a better sense of the passage of time here. The ending of the film—the fate of Tuptim followed by Mongkut’s eventual demise—doesn’t happen in what seems like a matter of hours but over the course of several years, which also feels closer to the reality.

There is also the problem of whitewashing. Sure, Yul Brynner wasn’t Thai, but he was Mongolian, which is at least in the vicinity. It’s at least a hell of a lot closer to Thailand/Siam than Rex Harrison’s stomping grounds. Linda Darnell, Lee J. Cobb and Gale Sondergaard’s Lady Thiang (for which she was nominated in a supporting role) are pretty far from being Siamese or even in the neighborhood of vaguely Asian. It’s a common enough problem for the 1940s, but it still feels a bit weird.

And let’s be frank here: Rex Harrison is no Yul Brynner, and nobody else was, particularly in the role the Brynner perfected and performed more than four thousand times. It’s again an unfair comparison, but a natural one. Irene Dunne, on the other hand, handles the role of Anna very well, and I like her in the role more than I do Deborah Kerr. She manages to be properly British, constantly aghast at the customs of the Siamese, willing to stand up for herself, and not a bit any less a lady of the 1860s for any of it. How she was skipped for a nomination, I’ll never fully know.

I think Anna and the King of Siam is worth watching, but I also think it’s worth watching once. While it is far darker and more interesting because of it, it flatly lacks the pageantry and joy of the musical version released ten years later. This is a case where I’ll give over to the joy and the music and the colors and costumes instead of the realism every day and twice on Sunday. What would I think if I saw this version first? Who knows, but I suspect I’d probably end up in the same place. You don’t beat Yul Brynner at his own game, not even if you’re Rex Harrison.

Why to watch Anna and the King of Siam: It’s magnificently filmed.
Why not to watch: If you’ve seen The King and I, you’ve seen the same story in color and with Yul Brynner dancing.