Film: The Martian
Format: DVD from NetFlix on rockin’ flatscreen. 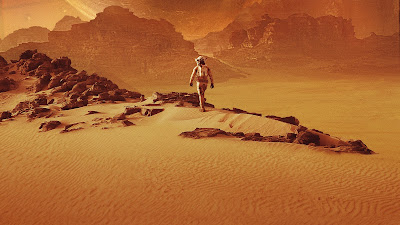 It’s kind of a running Hollywood joke that Matt Damon gets left places and has to be rescued. That’s the central plot device of The Martian: Matt Damon gets stranded on Mars and needs to be rescued. That might be the basic plot here, but the truth is that The Martian is less about rescuing Matt Damon and more about how balls-out cool space is. If you aren’t awed by space, amazed by it, or humbled by it, you haven’t really looked at it.

So at an unspecified time in the near future, The Martian proposes that we have sent a manned mission to Mars. A crew of six is on the surface of the planet doing Mars-y, space-y stuff when a massive windstorm crops up and threatens their small base. In fact, the storm is so significant that it forces an abort of the mission. The crew scurries to their craft to escape when a piece of blowing debris impales the crew’s botanist Mark Watney (Matt Damon), puncturing his suit and is biomonitor, which makes everyone think he is dead. The ship blasts off with a crew of five, leaving Mark on the planet wounded, but still alive.

What follows is, as Mark Watney says at one point, him “sciencing the shit” out of Mars in order to survive. He knows that it will be years until a rescue mission can be mounted to come pull him back from the planet, and even with the rations for six people, he doesn’t have nearly enough food to survive. As the botanist, he figures out how to use the potatoes in the rations and the vacuum-sealed waste packets to grow potatoes, which solves one of his basic problems. A bigger issue is the necessity for him to travel several thousand kilometers to where the next mission will land and how to keep himself alive during the trip.

It is a science bonanza. Mark heads first to the landing site of the Pathfinder probe connects it back up, using it to communicate with NASA. With the best minds in the world working on the problem, what we get is a fiction, hyper-intensified version of Apollo 13, where new problems crop up constantly and are solved through careful thought and bad-ass science. Rescue missions and resupply missions are planned and go south, until the Chinese space agency reveals that they have a rocket that can be used.

Two plans are developed. The first is to use the Chinese rocket to go to Mars and resupply Mark until the next Mars mission. The second is to resupply the returning spacecraft with the five astronauts and have them slingshot around the Earth, return to Mars, and pick up Mark on a fly-by. As that is the more dramatic and tense option, that’s the one we’ll be going with.

The Martian features a good ensemble cast, including performances from Jessica Chastain as the flight commander; Jeff Daniels, Kristen Wiig, Sean Bean, Benedict Wong, Mackenzie Davis, Donald Glover, and Chiwetel Ejiofor back in Mission Control; Shu Chen and Eddy Ko from the Chinese space agency; and Sebastian Stan, Kate Mara, Michael Pena, and Aksel Hennie aboard the ship. This is the sort of film that needs this kind of massive cast, and it’s one of the things I like the most about The Martian. While we’re supposed to be inspired by the heroic efforts of Mark Watney to survive on a hostile planet by himself, it is very much a team effort and science at its best to bring him back home. (It's worth noting that Benedict Wong seems to be known for space movies. His IMDB page shows him known for this, Moon, Prometheus, and Sunshine.)

What I like most here, though, is that science is the real star of the picture. I (and many of my readers) live in a country where a substantial portion of the population thinks that science isn’t true, that the planet is about 6,000 years old and that, to quote Inherit the Wind, we were planted here like a geranium. Movies like The Martian are critical for getting people excited about science and for inspiring another generation of people to think that space exploration is important and worth doing. We need more movies that paint science in a positive light and show it for what it can be and that show the people who work in science can be heroes as well.

It’s easy to take this in the other direction—without science, Mark Watney wouldn’t have been in danger in the first place. But it is the science that saves him. The people are the heroes here, but so are physics and botany and chemistry. It’s easy to overlook that, and it shouldn’t be overlooked.

The Martian is a compelling story, of course. There are obvious parallels to films like Apollo 13 and Gravity and Cast Away, as well as classic stories like Robinson Crusoe. One person isolated and surviving against all odds is always compelling, which is why so many stories and movies (Life of Pi, All is Lost, etc.) are based around this basic theme.

I enjoyed this quite a bit. It’s perhaps a bit long, running just over 2:20. Trimmed down a little, I think it tells the same story a little more efficiently. But that’s a quibble for something that just might inspire people to take more science and math classes.

Why to watch The Martian: Science is bad-ass and space science is especially bad-ass.
Why not to watch: Matt Damon keeps getting needing to be rescued.

Posted by SJHoneywell at 4:49 PM